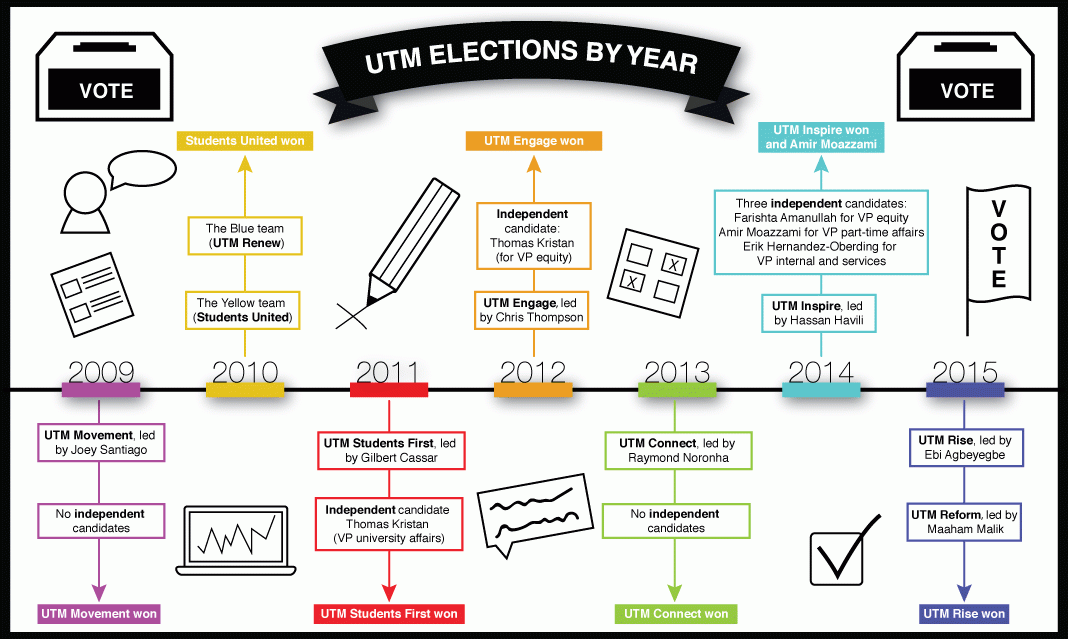 It’s that time of the year again: elections. Practically every UTM club, society, and committee (including The Medium) is electing students to fill roles for the next academic year. Last week, campaigning for the UTMSU executive positions began, and what may have surprised many students is the number of slates and individuals running for the roles.

In the past, this has not been the case.

In 2013, UTM Connect, headed by then VP internal and services Raymond Noronha, ran for all the available UTMSU executive positions. There were no independent candidates or opposing slates. The winners? Unsurprisingly, it was UTM Connect.

In 2012, UTM Engage, a slate headed by Chris Thompson, then VP campus life, ran as the sole slate. The opposition consisted solely of Thomas Kristan, a returning independent candidate from 2011, who was running for VP equity. With approximately 17 percent of the UTM student population casting ballots for the election, UTM Engage won all of the available positions.

Do you notice the trend or must I go on?

Generally, slates have been running unopposed for the UTMSU executive positions. Another observable trend is that these slates tend to include incumbent UTMSU members, i.e. individuals who are currently holding a position in the union. There have been a few scattered independent candidates now and then, and, even rarer, they may win the position they are running for—but they remain the minority.

While UTM Rise won the elections, Maaham Malik, who was running for UTMSU president in the UTM Reform slate, does not regret her loss. In fact, one of her campaign slogans had been to “break the ‘wall that exists between the students and the student union’ ”, and she believes that she achieved just that.

“Last year—I guess our team name gives it away—was about reform,” says Malik, a fifth-year biology and psychology student. “I guess the main point of our platform was to reach out to students and to let them know that there is not only one team that will run every year—you should have a choice and there should be more than one name on that ballot.

Looking at the number of candidates running this year, Malik says, “Even though we had a loss in the sense that we did not win the actual seats, considering that there are four full slates running in this election, I consider it a win, not only for us, but for any student on this campus who does not feel like they’re being represented properly.”

As for the trend that it is generally incumbents who tend to run unopposed, fourth-year accounting specialist Muhammad Talha Mahmood says, “People used to be surprised that no one else was interested in running—but that’s not true. It’s just the fact that even if someone wants to run, they’re discouraged from running. That happened to me and [Malik] when we started running [last year].”

Mahmood had run for VP internal as a part of the UTM Reform slate last year.

This form of discouragement and other controversies seem to be a feature in several past UTMSU executive elections.

For example, back in 2010, where two slates were running (the Yellow and Blue teams), there were several controversies, a key one being the gross reduction of demerit points.

If a candidate violates the Elections and Procedural Code, they will be issued demerit points. According to the electoral code, violations include infractions such as unsolicited campaigning, displaying campaign materials in unauthorized areas and “unsanctioned use of union resources”. This year, if a candidate receives 40 demerit points, they will be disqualified.

In 2010, disqualification was upon receipt of 35 demerit points. Bhatt, who was running for the UTMSU president position, had 62 demerit points, while her counterpart, Ssali, the UTM Renew presidential candidate, had 36 demerit points.

Following an appeal, Bhatt’s demerit points were reduced to 30 demerit points, while Ssali was reduced to 26 demerit points. Aside from the convenient demerit point reduction, what remains controversial is that a member of the Appeals Committee, Hiba Amin, had been openly supporting Bhatt’s slate (Students United).

Similarly, conflicts of interest can be observed in last year’s elections.

By the third day of campaigning during the 2015 elections, both teams had been disqualified by accumulating too many demerit points.

“Hassan Havilli was president that year—and he ended up being the campaign manager [for UTM Rise]. How is that unbiased? And not only that, but three other executives left their positions—took a leave—and supported their entire campaign. Three executives—that’s a lot of connections that you build throughout the year. As an executive, you literally know the students who are going out to vote because you’re talking to them throughout the year,” says Mahmood.

“I feel like the game that seems to be played by the incumbent—or the team that runs that is often supported by the slate in office—is the tactic to not actually democratically run against the opponent, but to eliminate them, so that they don’t have an opponent,” says Malik.

“That’s not the way an election should run—if you want to earn a seat, you should win the seat by appealing to a voter, not eliminating your competition and ensuring that you will win by default,” says Malik.

“I thought that I would see this kind of stuff happening in elections outside university—not university elections to be this intense and have this many problems,” says Mahmood.

Malik also pointed out that campaigning was occasionally being done by members of other universities, such as York and Ryerson.

However, following last year’s elections, Malik raised issues in the last UTMSU board meeting (such as current executives campaigning for a slate, and that campaigning was done by non-UTM individuals too), resulting in a few changes in the electoral procedure this year.

Additionally, a notice on the Wall of Transparency (in the Davis Building) states that current UTMSU executive members are not allowed to “play an active role within the Spring Elections and [must] have no part in the elections process”.

So it’s clear that there have been changes—changes in both the electoral code and the number of people running this year.

For the 2016 elections, there are a total of four slates and three independent candidates running.

Mahmood’s advice for the slates running this year is, “They shouldn’t be discouraged by anything that the opposing slate does […] I would suggest just staying strong.”

Malik advises slates to “not get caught up in the dirty politics”.

“Elections are not about friendship—they’re about what you believe in, what you can bring to the table, and what your platform is […] They are hiring you for a job—you are being paid for a position. So this is not a popularity contest. It is about appealing to the students and letting them know what you bring to the table,” says Malik.