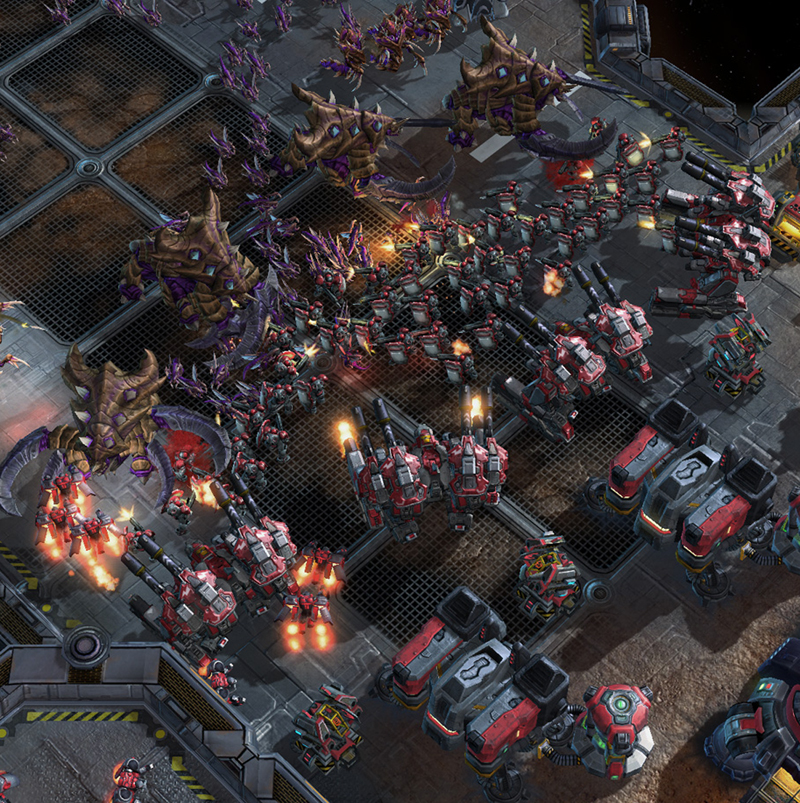 In the western world, there has always been a social stigma attached to video games: a frivolous pastime, classically male-dominated. Someone who indulges too often risks being labelled a nerd, geek, or what-have-you. Like any form of entertainment, gaming can be seen as a form of escapism, something to distract the mind from life’s perpetual obligations and concerns; but in parts of the world, it’s a profession.

There are places in which gamers are respected, even idolized by their communities. No, not at the local D&D get together in mother’s basement—real places. In South Korea there are, and for many years now have been, professional gamers who make a respectable living from their lightning-fast reflexes and virtual problem-solving skills. And by respectable I mean hundreds of thousands of dollars a year.

Though the range of games used for competitive gaming is wide, from sports games to first-person shooters, the industry largely revolves around one game developer: Blizzard Entertainment. In 1994 they released their first game and franchise, Warcraft: Orcs and Humans, which would catapult their name into the gaming industry. In 1998, they released StarCraft, which is still played competitively (in fact, more than ever) 12 years later. StarCraft was the game that epitomized the professional gaming scene of South Korea, as tournament games would  soon be televised and even played out in stadiums with thousands of cheering viewers.

In 1999, Sony 989 Studios saw the release of the massively popular Everquest, a massively-multiplayer online virtual world, the first of its type to achieve worldwide success. Users are billed on a monthly basis to participate in this virtual world where they achieve goals by working with groups (or “parties”) of fellow players to complete quests. This concept took the idea of escapism to a whole new level, providing a sort of alternate life to its players. Not surprisingly, Blizzard wanted a piece of the action and released World of Warcraft (WoW). Since its creation in 2004 to today, it has gained 12 million unique users, each paying around $13 a month to play. If my calculations are correct, that amounts to… a lot of money.

World of Warcraft cemented Blizzard’s name in the minds of gamers everywhere. Love it or hate it, Blizzard became a household name, recognized as devoted to their games and meticulous about the rectification of “imbalances” between player classes and abilities. Then again, with such strong financial incentives, they have every reason to devote their time to user satisfaction.

After many years of maintaining WoW, Blizzard has returned to their roots of strategy gaming and released StarCraft II, which from a competitive gaming perspective has become an instant phenomenon.

The stage was perfectly set: massive popularity and massive capital for Blizzard has allowed them to spare no expense in creating StarCraft II. Like the original, it’s a “real-time strategy” game, a genre often avoided due to their steep learning curves and the intense frustration of losing; however, it gained instant and unprecedented popularity simply by virtue of being attached to the Blizzard name. Further, competitive games are absolutely reliant on their state of balance (would chess be fun if one player started out with extra queens? Would anyone watch cricket if one team was only allowed to use half-sized sticks?) and, because of Blizzard’s massive financial success, they can adequately devote themselves to maintaining such balance. StarCraft can be played as one of three distinct “races”, each of which has an entirely unique set of structures, units, and abilities, and the preservation of fairness and balance between this huge set of variables is the most important factor in any competitive game.

October 21 saw the end of the GSL Open, a StarCraft II tournament which awarded its winner W100 million, approximately $180,000. That is a generous prize pool by anyone’s standards, and there are tournaments like this being organized all the time. The competitive gaming community is thriving in South Korea, where top players are treated like rock stars or athletes, greeted in stadiums by row after row of screaming fans and groupies (yes, attractive females, too!). Players are sponsored by big names such as Intel and Nvidia, who gain advertising opportunities while providing for the player’s living expenses, airfare to tournaments, etc. With the level of knowledge and experience required to combat top players, honing one’s skills becomes a daily duty (or rather a job) for the professional gamer.

The whole prospect seems close to absurd by our way of thinking, but in parts of the east, it is perfectly natural. Could the popularity of competitive and professional video gaming ever find its way into the western world? It’s difficult to say, but given the massive success of Blizzard in its recent endeavours, it has perhaps gained a much larger audience for StarCraft II than could have ever been expected. If sponsors such as Intel and other industry giants continue to support the competitive gaming scene, perhaps a handful of western nerds and geeks will get their opportunity in the limelight.