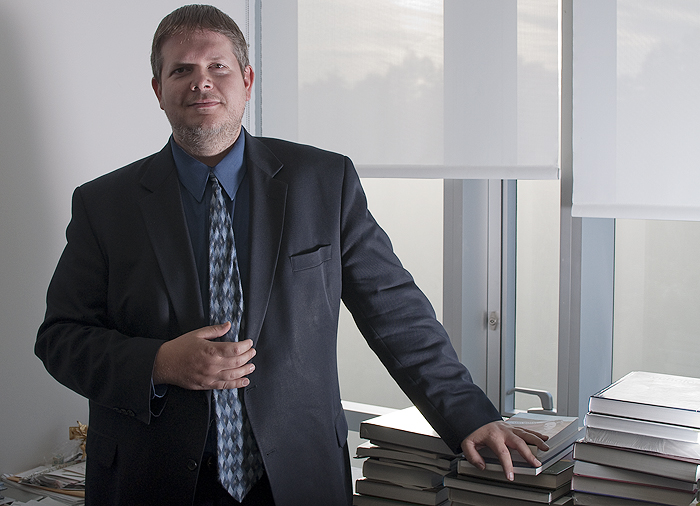 Much of the information about my family was lost in World War II. My father, who was born and raised in Germany, was the youngest of seven siblings. His father, my grandfather who I never met, was a manager at a steel mill, and of course the mill was taken over to make ammunition for the war. And my grandma was Jehovahs witness, which of course meant she was to be taken to the death camps. So they had to get rid of the most of the information.

There is no cultural heritage to Dax. It was the name of a character in a book—”The Adventurer,” I believe—that my mother read and really liked. His name was Derek Alexander Xavier and they called him Dax.

My dad lost most of his German. He didn’t speak the language from the age of 18 until he was late in his 40s. Obviously he had some issues with his country.

I didn’t know about that Facebook group, “Dax is secretly a superhero,” for at least a couple of years. Then a student showed it to me. I will admit I was creeped out a little bit, just by not knowing about it while people talked about it. Of course, in the end I’m nothing but flattered.

When I took Social Psych with Professor Pliner, who’s retiring now, I got hooked. I got hooked about understanding myself and people and why we do all these crazy things.

I like what I do. And when people see that, it’s contagious, it’s infectious, to have someone talk about things they’re fascinated by.

I was for sure a daydreamer.

I would like to see a removal of the adversarial system of learning. In the system of speed learning, or what they call mastery learning, every student works at that subject until they are at a proficiency, so those who are really good get to the A level quickly. And then when they’re done, they help other students get to a higher level. The benefit to the students who are faster is that teaching is the best way of learning and that they learn a new set of skills. The benefit to the students who aren’t as good is that they don’t have to go through life being C students. Right now, our system is based on competition. Now, I understand that if everyone has an A, who would you pick for the program? Well, we’d just have to come up with different and more effective ways to decide who goes where that aren’t just based on marks.

My girlfriend at the time could see that law wasn’t really what I wanted to do. She is a psychologist and she suggested that I see a friend of hers who does forensic psychology. I said okay. The next thing I knew, I was writing my GREs and got accepted in.

I practiced judo as a kid. And it really turned me on martial arts. In my early 20s, I began practicing kung fu, a traditional Shaolin kung fu, and I practiced that for about ten years. Currently I train in muay thai, kick boxing and Brazilian jiu jitsu.

I always read the course evaluations from students.

Jordan Peterson, who still teaches here at U of T, was a huge influence on me how you can impart knowledge in a practical way and how you can teach in a holistic way.

I don’t follow any particular religion. I’m really eclectic in nature and try to take the best from any system.

Just ’cause they said it in the news doesn’t mean the newscaster knows about it. There’s a critical difference between what someone tells you in the news and what you read in a scientific journal.

I do a lot of three-hour classes. I know that’s not the popular way of doing things. I like it much better this way and I believe the learning outcomes are much better. There are certainly studies that suggest this.

Not everyone has a curiosity or thirst for knowledge —many people don’t. But you can instil it.

A former student once told me that the thing he got out of PSY100 was that people don’t know themselves very well at all. I thought that was very astute.

I was a student for most of my life. Whether it’s for academics or for music or for martial arts, I’ve been in so many testing situations, on and on and on, so I understand it’s hard and it’s stressful and I understand that people are trying to do well and what barriers get in the way. So as a professor, most of the time I’m doing things that I wish others had done for me when I was in that situation.

I want to instil in students a thirst for knowledge, a want to not just accept things easily, to not just take the cognitively easy way out, to not take the simple A causes B explanation. I want people to be critical thinkers, to be analytical thinkers —to be open-minded, but cautiously open-minded.

The bureaucracy of the educational system is astounding. Trying to effect any type of real change, especially in the face of budget restrictions, is a daunting task.

In Taoism there is an overarching principle that one should practice three main ideas as a way to find contentment. One of these ideas is compassion. The other is gratitude, to see that the cup is half full. And the last is to have humility —not to have to shout from the rooftops how good you are. When I was younger, I was out to impress. Martial arts taught me that those who are out to impress don’t feel 100 per cent good about who they are. They aren’t confident that people will accept them at face value, so they make an extra effort to impress others.

I wasn’t much of a student. I wasn’t very keen, I didn’t sit at the front, I skipped lots of classes, I didn’t take many notes, I fell asleep in class quite a bit —I was such a night owl. I regret most of that.

I had a dream at one point that I would start a record label.

I read this article and they asked these four prominent lawyers what they do in their spare time for hobbies and all of them said, they don’t have any. Don’t have any spare time. Don’t have any hobbies. Law is all they do. And if that’s your passion, then good for you. But Lord forbid, if you’re doing it because you thought it was prestigious or because it was a lot of money or because that’s what mom and dad wanted you to do, you’ll be very unhappy very quickly.

It wasn’t until I started teaching that I said, Wow. There’s something I really like about this.

You get a decent wage doing this job. If you’re in front of people educating them, you certainly owe them enough to at least be engaging for them.