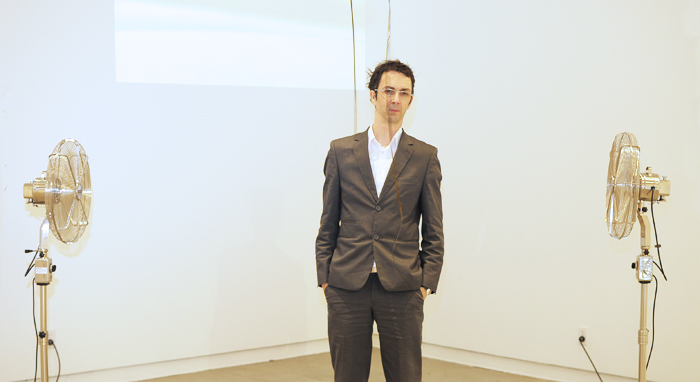 Christof Migone is a multidisciplinary artist, curator and writer. His work and research delves into language, voice, bodies, performance, intimacy, complicity and endurance. He has released six solo audio CDs on various labels; his installations have been exhibited around the world. He is currently a lecturer at the University of Toronto Mississauga and serves as Director/Curator of the Blackwood Gallery. View his works at blackwoodgallery.ca, and christofmigone.com.

â—� I was born in Geneva, Switzerland, and grew up there until I moved to Buenos Aires, Argentina when I was 11. My mum is Austrian and my dad is Argentinian and he worked for the United Nations as an interpreter. Two years later, in 1977, we moved to Montreal because my dad got a job there. Ive since lived in Ottawa, Halifax, Quebec City, New York City and now Toronto.

â—� Art was never really encouraged or discouraged in my family. My brother and I were really independent. We were supported by our parents, but thankfully not pushed in a particular direction in terms of a career. I moved out right at the end of high school.

â—� I started doing art by doing radio in college. Being relatively shy, I somehow found it easier to speak to a microphone than a person. The fact that the number of audiences listening through the radio was potentially quite large was okay, because they were invisible and thereby anonymous.

â—� My entry to the world of art was through music. Very quickly, one finds that all art forms are intertwined, and influences rarely stick to defined fields. In terms of what I was listening to at the time: Throbbing Gristle, Crass, Cabaret Voltaire, Sun Ra, Erik Satie, The Fall, Gang of Four, Prince Far I, Merzbow, They all overlapped with other art forms in some way.

â—� I curated my first exhibition in 1990 in Ottawa at the Saw Gallery. It was titled Touch That Dial and featured works that had radiophonic properties.

â—� When you do radio, youre curating in a sense. Youre curating time. Youre selecting a sequence of songs, youre constructing a playlist. These decisions determine what the audience will hear—DJ as curator. Thats very much akin to what a curator does.

â—� The main job of the curator, simply stated, is to select works and place them in the gallery. Often the selection is based on research around a theme and finding works that generate a conversation on said theme. In order to find the works, I conduct studio visits, regularly visit galleries and museums, and do extensive research in the relevant literature.

â—� In the case of a gallery, the curator has a spatial element to configure. The arrangement will determine what kind of experience the visitor will have. The exhibition constitutes a kind of narrative, albeit usually a non-linear one.

â—� Curatorial Studies is quite a new field, especially compared to Art History, the discipline it has emerged from. In a sense, it is both a specialization from within Art History, and a hybrid, post-disciplinary field, which also has strong affinities with a host of other areas such as Cultural Studies, Architecture, Design, Communication, amongst others.

â—� I often encourage my students to combat paralysis and get together, rent a space, and organize their own exhibition. Opportunities to exhibit are rare. You often have to make it happen yourself, and thats especially true for those who are just starting. Plus the experience of the do-it-yourself approach is invaluable.

â—� I started off dabbling in art around the same time I got involved in radio. I wrote some poetry (pretty bad poetry in retrospect), did some graffiti in the street, got involved politically, was in the punk scene. Despite my strong background in sound, Ive never stuck to one single medium. My interest lies more in the idea behind a piece, and the idea will often determine what form the piece will take.

â—� I began my undergraduate studies wanting to become a biochemist. I took courses in all the sciences, but also one elective in philosophy that blew my mind. At the time, I felt a strong need to comprehend the world around me and the structures of society. That course didnt offer the answers to those questions as much as a language to discuss them. This opened a door, and combined with my interest in music, I quickly got interested in Dada, Surrealism and all the avant-garde movements of the early 20th century. The agenda of those movements were all encompassing. In other words, a lot of them focused on all facets of life, not just on formal aesthetic questions.

â—� In my own work, Ive often used the sounds the body produces as my palette. Music largely pays attention solely to the voice, but the body contains a virtual orchestra of sounds at its disposal. For instance, Ive done a piece called Crackers, where I asked different people to crack different parts of their bodies. A more recent piece, I, features sounds of someone who had an enlarged tear-duct and could hold his nose and whistle out of his eye.

â—� There is often a mischievous element to my work.

â—� When I teach the audio art class, I usually start by talking about John Cages so-called silent composition, 433 , which consists of four minutes and thirty-three seconds where not a single note is played. The piece is meant to bring to attention to the existing environmental sound, and that is achieved through a subtle yet radical mischievousness.

â—� The purpose of art is to push beyond art, beyond itself.

â—� People often dismiss art because they feel that they are confronted by anything and everything in galleries. They are given few bearings, especially with works that do not fit into the accepted conventions of known forms, such as painting, photography and sculpture. I take a positive outlook on that situation by saying that that complete openness means that both the artist and the viewer are in a position of shared vulnerability. They both face the limitlessness of the imagination. The challenge is enormous.

â—� The galleries have become these unique spaces where there are no holds barred. They are spaces of intensely rigorous exploration and experimentation. The gallery is a context where new ways of thinking take form.

â—� Ultimately we want to communicate, we want to foster conversation. I hope students put the Blackwood Gallery in their regular weekly routine. What is presented in both gallery spaces regularly changes (the Blackwood proper in the Kaneff, and the e|gallery in the CCT building).

â—� A visit to the gallery can strike you negatively or positively. I actually dont mind either; they both signify an active engagement. The only troubling and undesirable reaction is indifference. A visit doesnt necessarily have to result in full comprehension. I believe that the best exhibitions are more prone to generate questions than answer them.