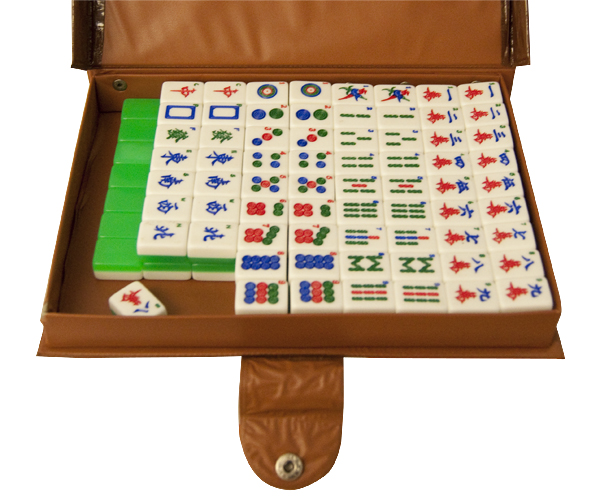 Mahjong, a game originating in China, is similar to the Western card game rummy. There are now many different versions of mahjong, but the most common rule set (and the one the authors are most familiar with) is the Hong Kong, or Cantonese, mahjong style. Four players, each with thirteen tiles, take turns collecting and discarding tiles. The ultimate goal of the game is to construct a complete hand of fourteen, consisting of various combinations of tiles.
Mahjong’s many rules, tiles and variations can look complicated, but if our friends (whom we taught one night, and who started beating us within the hour) are any indication, you should be able to pick it up in a flash. The key to mahjong is recognizing the tiles and the combinations you can make.
The tiles can be broken down into four suites, where there are four sets of each suit. The suites include circles, bamboo, characters, and the honour tiles (further divided into wind directions and red, green, and white dragons).
A winning hand consists of a combination of four melds and a pair. Melds are combinations of three tiles, and can be completed in two ways. You can combine three of the same tile (such as three north wind tiles), or make a meld from three consecutive numbers of the same suit (such as the three, four and five of bamboo). The melds can be made by drawing tiles from the mahjong walls, or by stealing an opponent’s discarded tile. Stealing is fun—you get to yell out “pung” for the same tile melds, and “sheung” for the consecutive melds. The pairs can consist of any pair of tiles. The first player to complete a hand of fourteen tiles made entirely of the four pungs or chows and a pair, wins the round. Many players assign points to different winning hands, depending on how difficult they are to construct.
Mahjong can undoubtedly be a gambling game, but it is often played in social contexts in many parts of Asia, where players vie against each other in a game of skill, luck and calculation, while socializing, gossip and gripe about life. Mahjong has since become popular in the West, creating region-specific variations.
You don’t need to be an old lady or a hardcore gambler to play mahjong. It’s a rewarding game of skill and chance that can make you look multicultural and sophisticated. Grab some friends, some tea and a mahjong set from chinatown and get ready for a long, long night.