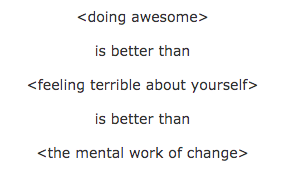 In a way, my entire summer (replace “summer” with “life”) can be summed up in the simple sentence below from The Last Psychiatrist:

<feeling terrible about yourself>

<the mental work of change>

Near the end of June, a close friend of mine sent me an article titled “Amy Schumer Offers You A Look Into Your Soul” by anonymous blogger The Last Psychiatrist. The article was published June 18, 2012.

It left almost no impression on me during my initial read-through. Then, after spending a day thinking it over, I read the article five more times. While reading the article and talking to my friend about it, I came to what I believe is the most important realization of my 22-year-long life: I am the only person who has the capacity to totally empower or limit myself.

Okay, maybe not the only person, but I want to radically shift how you view your life so I’m going to stick with that statement.

Let’s take a quick break and read that one-sentence-cut-into-three-parts again. Read it once more. Read it over and over until the “message” really sinks in.

If you read it and say, “Yeah, and?” then you haven’t really internalized it because, as The Last Psychiatrist says, this mentality is “running your life.”

That sentence is a universal diagnosis for a problem that is felt differently by everyone. It’s a pattern that is imprinted on every single one of us, and we rarely acknowledge it. When we don’t change for the “better” — when we don’t go to the gym, or eat healthy, or quit drinking, or become a better friend — we blame our behaviours on external factors or the past.

Even though I’ve read the article six times and internalized that statement to the best of my ability, I still haven’t really put in the work to change — not entirely. Thinking that I want to change doesn’t mean I’ve changed. Making the decision to change is just the first step. Following through with that decision is what really matters. Take action and do better, however you define “better.” And remember, it’s on you and no one else to change.

I suggest you read the article, because I barely scratched the surface.