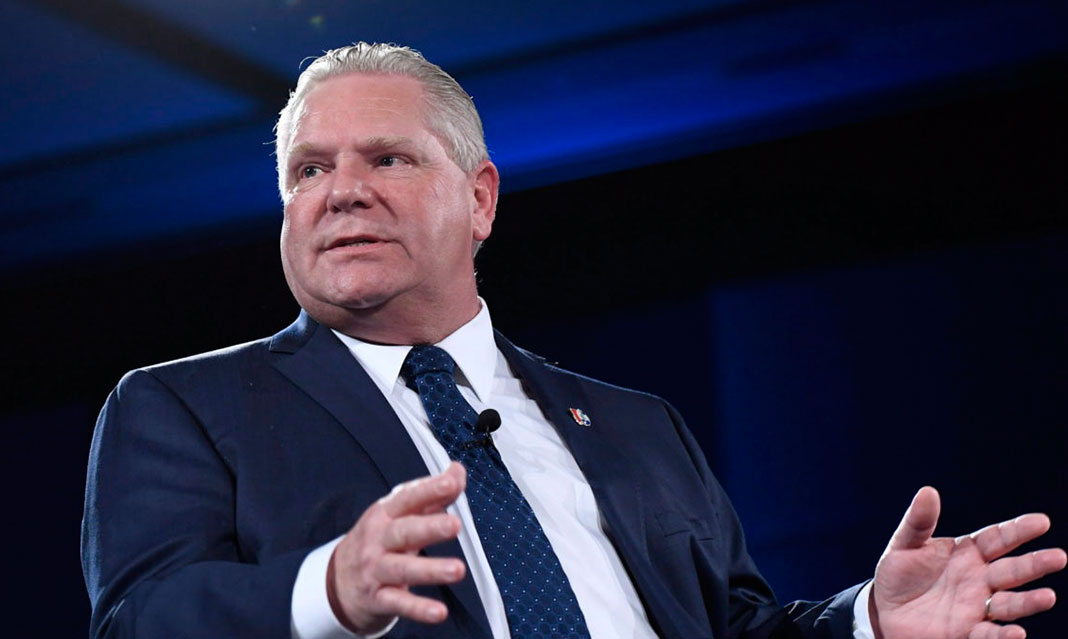 In August of 2018, Doug Ford spoke on gun violence in Toronto. He used rhetorical techniques to hide the fact that the speech was to justify $25-million in funding on top of Toronto Police’s already $71-million funding. Ford throws the families of gun violence under the bus by using them as a sentiment (an emotional appeal) to pursue his audience. Ford criticizes other politicians and policy-makers of using families and children to create more bureaucracy, even though he uses the same sneaky rhetorical techniques.

As simple his speech is, it is effective for a live crowd. However, it only took minimal research to find that, ‘coincidentally,’ at the same time $25-million was funded for Toronto police, $25-million was taken away from EPO (Education Programs-Other). EPO refers to specialized education including providing jobs for students in low-income neighbourhoods, daily physical activity programs, after school tutors, and more education programs that young students rely on for their success. The $25-million taken from EPO also includes the money for student grants on OSAP.

To appeal to his audience, Ford uses a combination of ethos and pathos to create an image of credibility and concern for victims of gun violence. He opens his speech by stating who stands behind him, Michael Tibollo, and Caroline Mulrony.  This is an ethos approach to insinuate that the Minister of Community safety and the Attorney general agree with Ford’s decisions.

Ford then immediately uses pathos, “Many families have lost loved ones to gang and gun violence. Too many people, too many neighbourhoods are living in fear and too many of our police officers are frustrated, frustrated that their hands are tied.”  Ford ties in the victims of gun violence with the police. This creates a close relationship between the victims of gun violence and the frustration of the police. This is effective because the audience associates the victims with the supposed solution. The $25-million raise in police funding now seems justified.

With Ford’s Progressive Conservative party winning the 2018 election with a majority government (76 seats and 40.63 per cent of the votes) and Wynn’s Liberal government party losing (7 seats and 19.30 per cent), Ford needs minimal effort to criticize his rival party. “The liberals decided that fighting guns and gangs wasn’t a priority. They actually cut the funding to police who were fighting guns and gangs, and they cut it in half. It’s unbelievable, and, sadly, we are seeing the results of their funding cuts on our streets today.”

Ford appeals to his followers by blaming the rival Liberals, and even implying that the rise of gun violence is due to their budget cuts. “How many shootings could have been stopped if the Liberals didn’t cut this funding?” Information that Ford evades is the fact that although more funding has gone to police, funding has been cut from social services and education. Coincidentally, the police force received an extra $25-million in funding, but the EPO (Education Program-Other), received a $25-million cut in funding. This cut is part of the OSAP changes.

Without some investigative work after the speech, the audience members are led to believe that Ford is cutting funding from “city counselors, activists, and special-interest who use each shooting as an excuse to campaign for more spending, more layers of bureaucracy, and more handouts, and more pet projects. Throwing money at programs that have nothing to do with community safety.”  With Wynn’s reputation of funding useless programs, and the failed TAVIS program (a program funded for 10-years to stop gun crime), Ford is in a position where he can omit information on where funding is being reallocated.

The audience member is led to believe that “handouts” and “programs that have nothing to do with community safety” refers to Wynn’s failed budgeting and the failed TAVIS program. What Ford evades is information on the whole picture, and the fact that funding is being removed from Ontarian education programs. Education that can ultimately prevent poverty and indirectly stop gun violence. The audience would have a negative reaction if Ford explained that he is taking $25-millions in funding from EPO and reallocating it on top of the $76-million funding for the Toronto police.

Ford’s examples and evidence are half-logical. It is logos that appeals only to support his police funding. Ford addresses a problem: “far too many criminals convicted of gun crimes out on bail and back on the streets.”  Ford later addresses a solution to that problem: “a dedicated legal SWAT team. Each provincial courthouse. Each team will be led by a Crown attorney and each team will have only one mission, keeping violent gun criminals behind bars and away from bail.”  This is a strategic argument using both ethos and logos. Ford uses an example of the problem in his solution. He insists that criminals are leaving the prison system on bail, and back into Toronto to commit more crimes. He assumes that criminals of gun crimes are even let out on bail.

According to a CBC interview with Toronto criminal defence lawyer, Shane Martinez, “In addition, Crown lawyers already have a directive to seek a detention order in firearms cases, except in exceptional circumstances, so it’s not entirely clear what will change with the province’s announcement on Thursday. ‘That basically means that this will likely end up being rhetorical fluff that doesn’t amount to much when [Justices of the Peace] and judges apply the necessary tests to determine if a person will be granted release,’ Martinez said.” Martinez can only criticise the Premier’s decision after it has taken affect. It turns out that Ford’s special SWAT will do nothing to add to the Justice system against gun crime. Criminal defence lawyers also criticize Ford because criminals guilty of gun violence do not receive bail.

Bail is used to scare the audience. The audience thinks that our Justice system is failing by allowing people who commit gun violence back into the streets of Toronto. That is not the fact. Ford’s logos to support his funding is used only when the proof justifies his police funding.

Ford uses challenges his colleagues in the federal and municipal governments—both left-leaning parties that rival his right-wing policy—by saying: “we are calling on the municipal and federal governments to match this unprecedented funding. We are calling on them to step up and do their part. The feds must do more, and the city must step forward, starting with following through on their commitment to hire more officers.”  Ford confronts the Trudeau government and the Tory municipality by standing himself on a pedestal demanding that they match the $25-million funding for Toronto police.

In Canada’s political climate, Justin Trudeau has been relentlessly criticized for being too hard on gun owners and too relaxed on violent criminals. Mayor John Tory has been scrutinized by Ford followers due to Tory’s hand-gun ban.

“I wouldn’t support a ban on hand-guns,” Ford says confidently. This short sentence spoken from Premier Doug ford resonated through every headline in every news station. Ford diverted attention away from the $25-million police funding and directed it to the controversial and polarizing hand-gun ban. This small sentence appealed to his politically-right followers and gun owners. Ford demonstrates strong individualism by keeping his opinions, even in the pressure of his left-leaning colleagues.

Ford sacrifices facts for emotional appeal. He keeps saying that he wants to leave the Police Chief up to fixing the problem. This may seem like the all sacrificing, humble Premier Ford bowing down to the professionals. However, this is just a way to remove responsibility from himself and place it onto the Toronto Police. Ford is the one who gave the Toronto Police $25-million! How are you not responsible for gun violence when you are: one, the Premier of Ontario, and two, moving $25-million from student grants to police officers.

Ironically enough, Ford says he wants the new police funding to go towards better technology for police officers to crack down on gun violence. However, Ford scrapped Toronto’s plans to open the first ever French university that planned to open in 2020. The university was going to focus on technology.

Whether we want this money in the hands of police officers or young students is up for debate. There are legitimate reasons for increased Toronto Police funding. However, there is no excuse for Ford to lie in front of a podium by criticizing his opposition for spouting the same sneaky rhetorical techniques that he himself uses.

What we learn about Ontario politics is Wynn’s liberals borrow money, putting future generations in debt. And, Ford’s conservatives shuffle money around like a street-hustler shuffling three cups around for us tax payers to guess where our money will end up. One of those cups holding $25-million.

Double Major in PWC and Psychology, Minor in French studies.