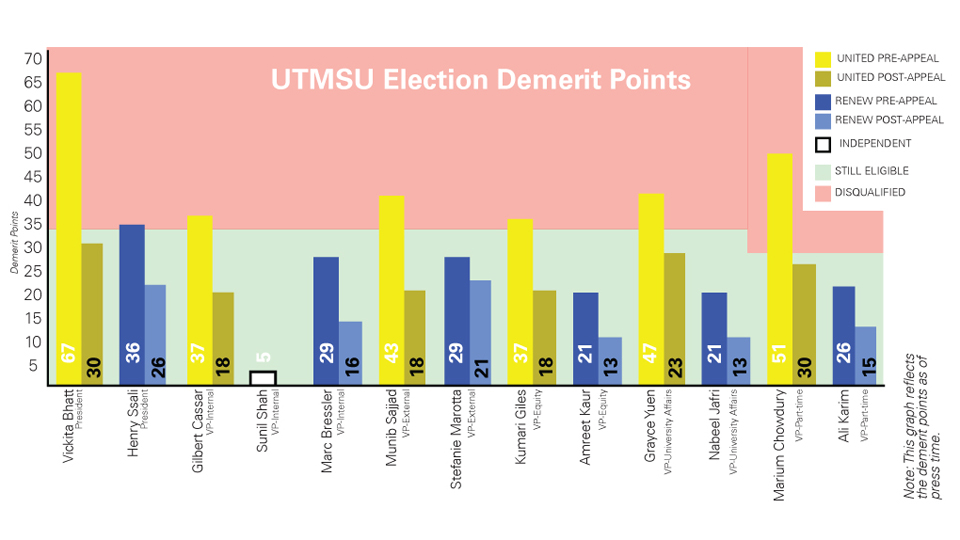 This school’s awareness and involvement is in the most pathetic state I’ve ever witnessed in my five years here.

All week, the other editors and I walked around campus looking for candidates and volunteers to answer questions and perform interviews. At one point on a Wednesday afternoon—one of the busiest days of the week at UTM—we walked around for two hours before we finally found an executive candidate. With only four days left in the campaign period, I wonder how students are expected to make informed decisions when heading to the voting polls.

Not voting, you say? Well, you’ll be pressured to. You will be walking to class, head buried in your cellphone. Then a stranger in a lime green shirt will say hello, shove a flyer in your hand, and motion you towards the polling station.

Then, after the elections close and the results come out, the candidates will announce victory with a 15% voter turnout, the average student union election turnout statistic on this campus. That’s approximately 1,800 of the 12,000 undergraduates at UTM.

Then UTMSU will say that students are informed by and engaged in their student union.

To preface what I’m about to say, the individuals at the student union are, for the most part, bright and well-meaning students. I have been particularly impressed with this year’s executive. President Chris Thompson set up not one, but two referenda. Yes, one of them failed due to technicalities, but they represented progress nonetheless.

When I criticize the union, my opinions are not directed at individuals. My criticism is directed at the institution as a whole. There are overwhelming weaknesses in this year’s election in particular.

The editorial team and I have been on campus all week looking for coverage opportunities. I ran into executive candidates just twice.

Then there’s the debate that seems more like a question and answer period. The event, set for Monday at noon, was initially advertised on Facebook on Friday night. With less than 72 hours’ notice, what kind of turnout can UTMSU expect? As of press time, about 250 students are invited and nearly 40 students say they are attending. That neglects only 11,700 other students at UTM.

Each year, The Medium covers the debate. If you watch the video from last year, you’ll notice that the few students in the pub looked relatively uninterested and I was virtually the only person stepping up to the microphone. I had an article to write and since no one else was asking the hard questions, it was up to me to clarify the candidates’ claims.

Yet on the Facebook event page for this year’s “debate”, last year’s VP equity said that she wishes more students would ask questions, saying that students instead “get upset”. It’s extremely unfortunate and discouraging that the few students who take real interest in our student union and ask informed questions about policies are insultingly dismissed as “getting upset”. That attitude is neither inclusive nor representative of the student population.

By the way, your questions will be screened before you head to the microphone.

On the event page, I asked why The Medium’s news editor was refused an interview. We set up the interview on Wednesday, and four hours before the interview on Friday, the news editor was informed that the questions had to be screened by the chief returning officer—who is hired by the union to oversee elections. She was about to step into a long meeting and only had time to send three questions and reassured the CRO that all her questions would be germane to the candidates’ platform points.

In the interview, she proceeded to ask a question that hadn’t been screened by the CRO but was directly related to one of the candidate’s platform points. UTM Connect refused to answer any more questions and brought the interview to an abrupt end.

On the Facebook event page, the deputy returning officer—also hired by UTMSU—said  that “as per the rules”, interviews are considered promotional material and, based on “past precedence”, need to be screened by the CRO.

So I referenced the union’s Elections and Procedures Code. Interviews are not specified as campaign material. As for the alleged precedence, I’ve been taking part in UTMSU elections since 2009. Last year, I interviewed the independent candidate and the CRO did not require that questions be screened and did not categorize the interview as promotional material. The Elections and Procedures Code hasn’t changed, so the rules this year are the same as last year.

Regardless, I have yet to receive a response explaining why the candidates refused a legitimate and relevant interview of a member of UTMSU and student of a recognized student organization.

I ran for UTMSU three years ago. I had heard the rumours about the big bad union and, although I felt intimidated, I resolved to run on the so-called opposition slate. Then intimidation took on a new meaning.

The yellow slate, UTM Students United, and the blue slate, UTM Renew, both campaigned tirelessly and clocked in hours of work. We all missed classes, skipped meals, and cut back on sleep.

The election came down to the way the elections were adjudicated. Each week, we came before the Elections and Referenda Committee, comprising two UTMSU executives, the UTMSU-hired CRO, and a UTMSU director of the board, and listened as our demerit points racked up, bringing us nearer and nearer to disqualification. The other team had been found guilty of the same infractions, but the committee conveniently reduced the number of demerit points for them. At one point, the other team had so many demerit points that they were disqualified from the election. The next morning, the committee reduced their demerits by nearly half and they evaded disqualification.

Aside from numerous other occasions where our efforts as the “opposition” team were suppressed, I was personally pulled into the student union office by the current executive director of UTMSU. He tried to convince me not to run. The same was done to the other members of my team.

That year, the elections saw the highest voter turnout in the organization’s history, demonstrating that competition and choice promote discussion and participation among the electorate. Why would the union want to discourage that?

This is my opinion based on my experience. I’ve approached UTMSU several times this year, encouraging them to write letters to the opinion section to ensure comprehensive coverage that includes diverse voices from UTM’s student body. Along with the news editor, we ensure that all parties are contacted to provide balanced information and perspective in all news articles. The Medium is the recorded and published voice of students on campus and will always investigate contentious issues affecting stakeholders. The result, whether positive or negative, relies on the message put forward by the organizations involved and the position of the reader.

I recognize that members and volunteers of UTMSU would disagree with me and even accuse me of bias.

Regardless, there is a reason that incumbent executives run unopposed every year for some of the highest-paying student jobs on campus.

An option you won’t find on the ballot is “abstain”. There will be boxes for “yes” and “no”. As you have probably assumed, I don’t expect to vote yes. But I also won’t vote no.

I’ll abstain—an option of which most students are not made aware. I will leave the ballot blank to abstain and demonstrate that I am not “informed” just because someone in a t-shirt shoved a flyer in my face at the last minute.

Mr. Noronha is a competent and professional executive, and I am confident he will make progress with important campaigns next year. However, while UTM Connect is quick to take credit for accomplishments achieved by this year’s executive, such as the credit/no credit policy, I have yet to hear about issues such as the failed Student Centre expansion referendum and the replenishment of $140,000 in student money taken from the contingency fund to redeem yet another failed campaign.

Without more choices and greater accessibility and transparency from the unopposed slate, I don’t feel confident in the system.