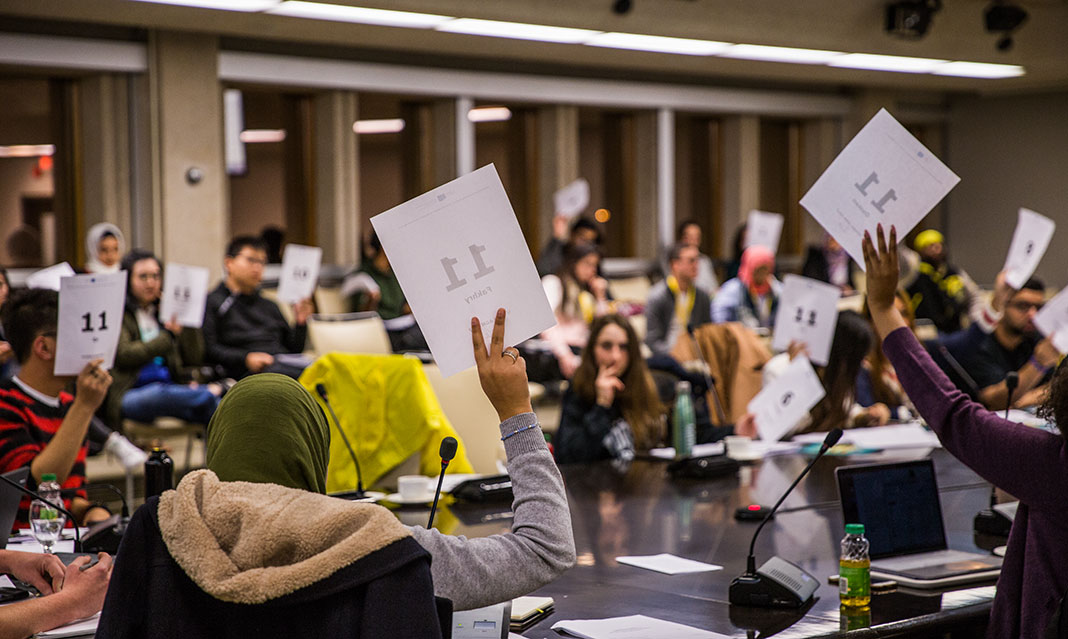 The relationship between student unions and journalism outlets over the years has been at odds with one another. On one hand, there’s a trend for student unions to ask for respect and a degree of openness/understanding between a journalism outlet and their elected members. However, underlying that openness/understanding is a breadth of aims to silence, control, and manipulate our existence.

I bring this topic up in light of the SCSU’s motion to control media access to meetings. The Varsity reported that SCSU’s Director of Political Science moved the motion with the claims that “Student media have been abusing their positions as disseminators and aggregators of information.” It was also said that “it was very disappointing to see a lot of the reporting not just by existing student organizations but start-up student organizations reporting falsely on what the Board of Directors have done.”

This isn’t the first time student journalists, and journalists alike have faced this pressure/policy making. The Medium has recently faced this wave of media control from UTM’s own union. We were recently informed that we were to request any access to UTMSU events and meetings in advance.

This is problematic, and like I’ve said, this isn’t the first time student journalist outlets have faced this type of “media control.” Student Journalists, New York Times Journalists, Toronto Star Journalists, you name it, we have a common goal. To inform and to hold those with power to account. While simple to reiterate, it can come at odds with those in power who consistently do all in their power to ensure their organization is represented in the best light possible.  I refuse to let anyone believe that our role as student journalists is any different than that of a full-time journalist.

For the SCSU to create a motion to deliberately control how the media operates is undermining the media’s ability to do their job. Simply put, the SCSU’s policy is saying that they don’t trust journalism outlets like The Varsity. Unions have no authority in determining which outlets can report on them or not. When they move towards creating policies that pick and choose who can report on them, it becomes more about creating the perfect image as a union, rather than following a transparent democratic philosophy that unions seem to preach constantly. This goes for governments as well. We are well aware that politicians will curate responses to ensure that they/the government is shaped in its best form, but we’re also aware that any attempt to bar journalists from access to information, or from asking questions, goes against Freedom of the Press and democracy in and of itself. So what makes unions different than governments who make these policies? Absolutely nothing.

Journalism outlets including campus outlets are not asking for acceptance or approval from unions. All we ask is for unions to respect our duty to report, inform, and hold to account. The expectation is that union’s will not hide away from journalists, or make attempts to bar us from access to that information, after all, it is in their best interest to be honest with their constituents, isn’t it?

In our article about the SCSU motion, it was said that the chair of the meeting at the SCSU AGM stated that the “ban was mainly about protecting board members from intimidation.” As a representative of The Medium, I understand that it can be intimidating to be questioned for your actions, and your work. However, it is a part of the work. When accepting the role of EIC, I recognized that part of being a public figure comes the responsibility to answer to the students who pay a portion of their tuition to us. Becoming a board member of the SCSU, UTSU, UTMSU, or any other student union/governing body comes the responsibility to answer to those who pay you. You can be intimidated, understandably so, but it’s a responsibility we as elected members of our organizations have to be willing to take on. If we can’t answer to our constituents, how can we be trusted? Transparency can’t be preached if the willingness to be responsible for transparency won’t be acted upon.

In light of all this, the Canadian Association of Journalists did respond by saying that they “remind every government, whether elected by students of the general public, that they do not have to right to control which journalists attend events that are open to the public.” I wholeheartedly agree with this statement. The Varsity, The Underground, The Medium, The Fulcrum, The Toronto Star, etc, all have a mission, and we won’t be backed down or barred from doing our work honestly.

Transparency and respect can only operate if it goes beyond being preached. I urge you as students to be involved and be attentive to instances that go against our fundamental rights and when freedoms are attacked. With power it can be easy to be the intimidators, but it’s challenging to stick to your beliefs and know how to respectfully hold your ground. Unions and governments alike will constantly try to drag journalists through the mud, but know that we won’t stop informing and asking the important questions, even with every attempt to stop us.

Honesty, liberty, and truth bind journalists. We will never let go of these values.