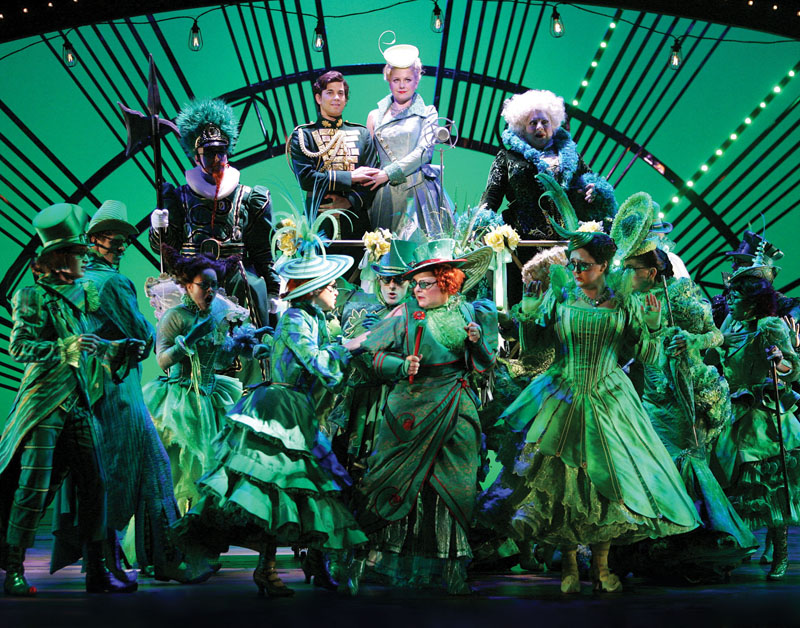 After breaking the box office in its 2005-6 Toronto run, Wicked is back in town at the Canon Theatre, and selling out fast. The Broadway musical, based on Gregory Maguire’s novel of the same title, features the back story of the Witches of Oz before Dorothy walked the yellow brick road.

The story begins with the celebration of the Wicked Witch of the West’s death. Glinda (or Galinda) (Chandra Lee Schwartz), the Good Witch of the North, better known for her puffy pink dresses and traveling by bubble, arrives to confirm the Wicked Witch’s death. The musical soon turns into a coming-of-age story when Glinda recounts her school days at Shiz University where she shared a dormitory with the Green Witch.

The Wicked Witch (Jackie Burns)—who is finally given a name, Elphaba, in the novel and musical— struggles to make friends while also taking a stand for the animals in Oz who are losing their ability to speak. The story quickly turns to one of the difficulties of fitting in when something like skin colour sets you apart.

As Elphaba tries to find her place alongside the Wonderful Wizard of Oz (Gene Weygandt) in the Emerald City, Glinda tries to find a place alongside Fiyero (the “bad boy” at Shiz played by Richard H. Blake). The musical switches gears as both witches desire to live the lives they see fit, and various twists inevitably ensue. Elphaba becomes known as “wicked” while Glinda is dubbed “good”, and so the hunt for the Wicked Witch of the West begins.

Luring the Wicked Witch proves easy when a plan to drop a house on her sister, the Wicked Witch of the East (Stefanie Brown), is devised. The Broadway hit reveals the true faces of the Scarecrow, the Tin Man, and the Cowardly Lion, in twists that can only be foreseen by listening to the clever lyrics of every song.

As the two witches strive to fit into the roles assigned to them, they also fight to keep their friendship (now a secret from all of Oz) intact.

“Wicked works because it has something Broadway musicals, so addicted to facetiousness and camp, have largely given up on: a story that adults can take seriously…If every musical had a brain, a heart, and the courage of Wicked, Broadway really would be a magical place,” said  Richard Zoglin, an American journalist and critic, in an interview with Time Magazine.

Wicked explores the difficulties of fitting in, the hardships of friendship, the loss and gain of love, and the goodness in all of us.

The musical hit made its debut at the Gershwin Theatre on October 30, 2008. Kristin Chenoweth and Idina Menzel originated the roles of Glinda and Elphaba during its Broadway run.

For reasons unknown, this season’s production features Mariand Torres, standby for the character of Elphaba, until further notice. Although Torres is the understudy, her performance proves expert. With only a few rushed lines, Torres manages to glow as Elphaba. The bubbly and pink character of Glinda proves effortless for Schwartz, whose rendition of “Popular” had the audience laughing and cheering.

This year’s production also features recycled/green Wicked bags for those purchasing merchandise from the theatre’s gift shop. As they do at every production of Wicked, some theatregoers dressed up as witches in long black gowns and pointy hats.

After the performance, actors stood in the theatre’s hallways collecting money for Broadway Cares/Equity Fights AIDS, an organization that raises money to help people suffering from AIDS. For a donation of $20, people can win the chance to go on stage during one of Wicked’s future performances in Toronto. A poster signed by all cast members is awarded for donations of $50 or more.

The Canon Theatre is offering a Rush Seat Lottery for every performance of Wicked. Two and a half hours before each production, theatre goers can have their names placed in a lottery for a chance to win a maximum of two tickets. Names are drawn half an hour later and winners can claim their tickets for the price of $25 (cash only). Wicked is on stage at the Canon Theatre until November 28.