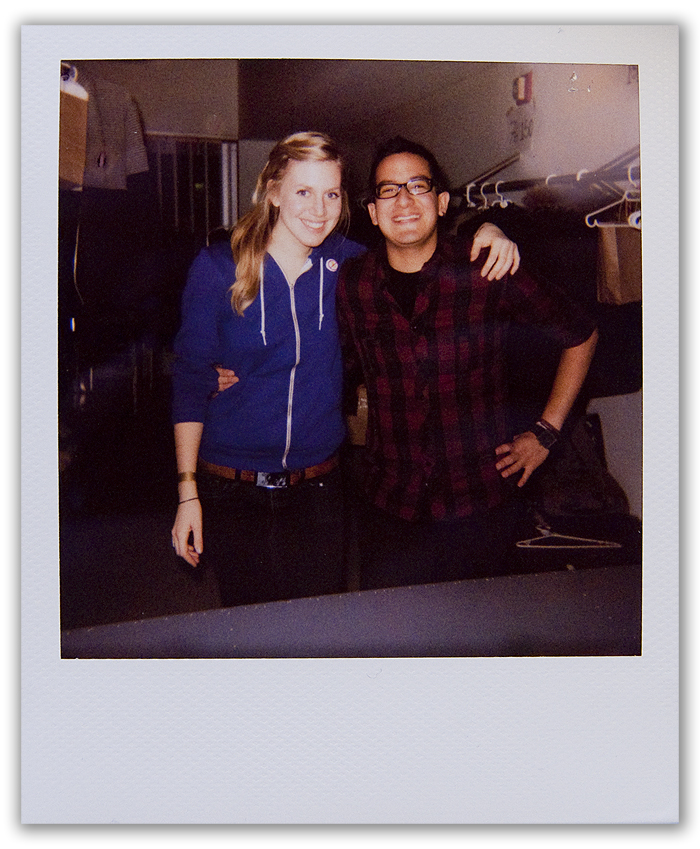 The fall semester is on its last legs, after going through a series of physically impossible actions (but totally tangible metaphors) like falling, jumping and flying, but, curiously, never, landing. Your feet are never on the ground and there is always anticipation of what may happen next.

The Blackwood Gallery has held a number of falling and jumping events this year, and has put hair on our chest while doing so. Last Thursday night, the Blackwood Gallery, along with CFRE Radio, co-hosted the Blind Ducks first and best alternative/indie pub, Up Up Down Down.

The event delivered on its promise of live DJs, projections, live graffiti, Jumpology!, free stuff, loot bags and CD giveaways (as per their Facebook event page). House of Pains Jump Around was appropriately played and torn apart by the movers, shakers, bumpers and grinders of the dance floor. Everything from Peaches, Arctic Monkeys, Vampire Weekend to Passion Pit, Death From Above 1979 and one Justin Timberlake (accidental?) track, was played. CFREs Daniel Wilson and Sam Montgomery composed the playlist. Ken Chatoor, Sufian Malik, Ashley Warnock and Shelley Williams were some of the other DJs present.

In conjunction with Up Up Down Down was the launch of Jessica Vallentin and Mallory Hazletts show, UP and AWAY at Inset Space, a newly established student gallery in the North Building. The show was composed of works and performances by student artists Jennifer Chan, Mallory Diaczun, Amanda Haller, Mallory Hazlett, Krista Keller, Emily Read, Breann Ritchie, Nicole Schlosser, Wesley Tsang, Jessica Vallentin and myself. UP and AWAY was inspired by the ideas behind the current Blackwood Gallery shows, Fall In and Fall Out, which focus on concepts and ideas related to gravity. UP and AWAY runs from November 26, 2009 until January 22, 2010.

The show kicked off with Amanda Hallers piece, Jai Une Ame Solitaire. The show was to be held at the empty field between the CCT Building and the Library, but due to the typically shitty weather of late November, was relocated to the Link between CCT and  the Library. The motivation to Hallers piece was to enliven and transform an otherwise mundane and dead space into a space that students would feel comfortable using, even if it was for a short while. The event offered free hot chocolate, blankets, sweet party hats, and lots of friendship.

As a part of the ongoing show, Jennifer Chan will be hosting Throw Up: A Very Informative, Informational & Informal, Fast, Free & Fun Lecture On The Ethics of Gastrointestinal Self Care and Cultural Recycling on a very decisive day in January 2010. This event will be followed by a roundtable on the relationship of vomit to cultural operations. This roundtable will feature St. George campus Maria Luiza Campos, UTMs Joseph Ticar and York Universitys Brad Tinmouth. A kite-share program and a giant slingshot will also be featured in January 2010.