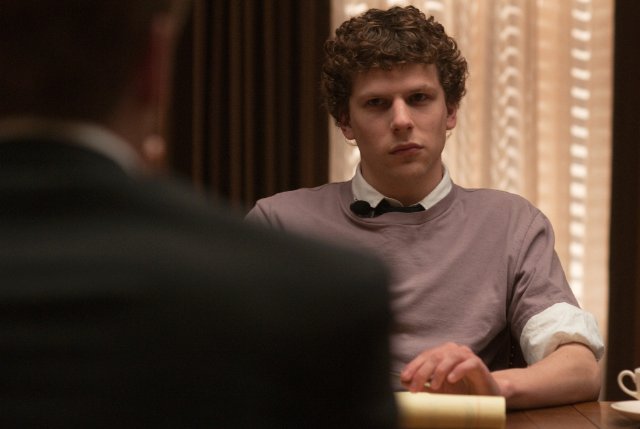 At this point, it’s difficult to argue that Facebook hasn’t shaped our culture in some way. Not only have terms like “relationship status” and “poking” taken on entirely new meanings, but we can now directly compare our social lives to those of our friends. It’s all about how many Facebook friends you have, and that little sting you can’t help but feel when someone you know removes you from their friends list. But why would we want this tidy little index of our life put on display to the world? David Fincher’s new film, The Social Network, argues that it’s all about status and being seen.

Evident from the very first scene, a young Harvard student named Mark Zuckerberg (Jesse Eisenberg) is acutely aware of this common desire for status (and of the sorry state of his own social standing). Not fitting in with any of the school’s prestigious clubs, Zuckerberg decides to make his own website with the simple hope of making something “cool”. In its earliest form, Facebook, or “Facemash” as it was known at the time, was a site that simply presented yearbook pictures of two female students side by side, and asked its viewers to vote on which was hotter. The site evolved, of course, but looking back, it seems like its pithy concept of prestige was always there.

The majority of The Social Network takes place in the fall of 2003, as Facebook is created and begins its rise in popularity in 2004. But Fincher also intersperses scenes from the messy legal proceedings that Zuckerberg faced a few years later. These two separate lawsuits—one from friend and Facebook co-founder Eduardo Saverin (Andrew Garfield), and the other from classmates Tyler and Cameron Winklevoss (both played by Armie Hammer)—resulted from claims that Zuckerberg stole their idea.

Despite the amount of screen time allotted to financial spats, in the end The Social Network isn’t a legal drama or even a film about Facebook. It’s Mark Zuckerberg and his few relationships that are the heart of the story—thanks in no small part to Eisenberg, who gives his most charismatic performance to date as this petulant, almost entirely unlikeable character. (I never thought that Eisenberg would play a more acidic or self-obsessed character than he did in The Squid and the Whale, but clearly I have been proven wrong.) As his character is constantly pelted with insults (most of which he entirely deserves) from other characters, Eisenberg’s vulnerability brings a much-needed sense of sympathy to a character that could have been a caricature of a vindictive geek.

Eisenberg also helps to redeem the slightly repetitive present-day prosecution scenes. Though the flipping between time periods begins to bog the film down around the midway point, Eisenberg’s ferocity and defence as a man under attack gives those scenes a purpose beyond exposition.

Garfield is also fantastic as the far more likeable Saverin. He evolves from a charming doormat to an adversary, and Garfield especially shines in the film’s more combative moments. He proved his acting chops in 2008’s harrowing Boy A, and here he brings boundless charisma and heart. In a somewhat static film that largely revolves around laptops, dorm rooms, and legal offices, Garfield (who’s clearly a star in the making) gives compelling energy to each of his scenes.

The Social Network’s other great strength is the screenplay from Aaron Sorkin (best known for his work on The West Wing). With almost every scene revolving around a long conversation, some might find it a bit talky. But rather than seeming verbose or dry, Sorkin’s dialogue is irrepressibly witty. There are just enough self-referential moments (the best one revealing how Zuckerberg thought of Facebook’s “Relationship Status” function) without the film ever seeming overly pleased with itself.

However, that’s not to say that director David Fincher’s artistry takes a backseat here. The Social Network may not be as stylized as Fight Club or have as palpable an atmosphere as his last two films, The Curious Case of Benjamin Button and Zodiac, but it does have a dangerous, murky style that serves it well. Fincher also throws in one flashy sequence (a rowing race) that allows him to show off behind the camera. Though that scene does feel slightly out of place in the context of the story, on its own it’s a fantastically directed film.

While trends like Facebook come and go (though this one doesn’t seem to be going anywhere just yet), quality films are much harder to come by. The Social Network is worth seeing not only because it’s socially relevant, but because it’s one of those rare instances where writer, director, and cast come together to make a film that takes a timely subject and speaks to all generations.