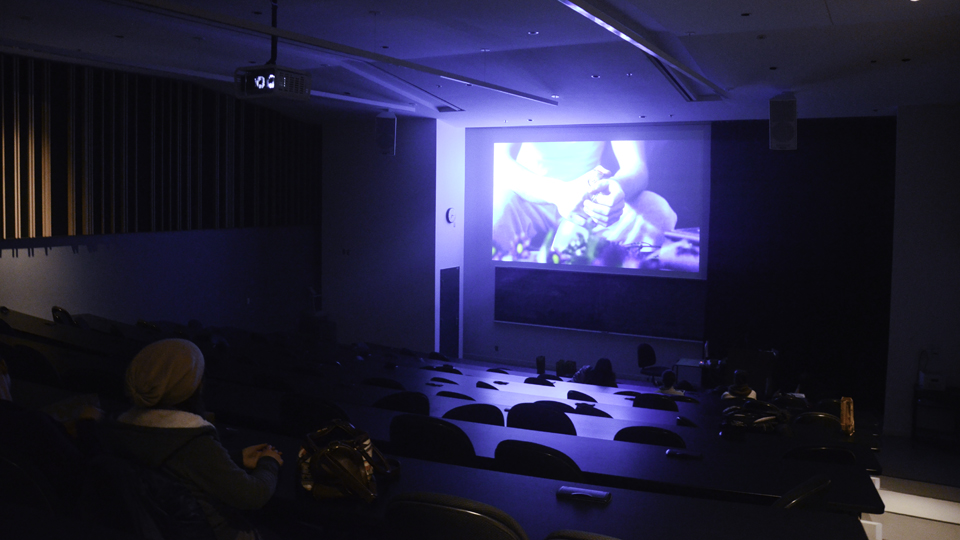 The Department of Visual Studies Student Society held the awards ceremony for the UTM Film Festival in the CCT Building last Wednesday. A few students were scattered around the theatre and the event coordinators sitting in the front row offered the audience free popcorn to create a true theatre atmosphere.

DVSSS accepted short film submissions from UTM students from January 28 to February 18. The films were posted on Vimeo as well as being screened at the event, so viewers had the opportunity to watch them ahead of time and vote for their favourites before the awards were handed out. The awards were Best Special Effects, Video Art, Best Picture, Best Documentary, and Viewer’s Choice.

Two of the winners were shown first. The night opened with a great film directed by Miguel Sta Cruz called “Life’s Moments”. The film is described on Vimeo as “a man recounts his life/death experience where he remembers pivotal moments in his life that have shaped him”. The film won Best Picture at the end of the evening, and definitely deserved the award.

The second picture shown was the Best Special Effects winner, directed by Mikei Huang. It was called “The Music Music Video”,
described as a fan-made video for the song “The Music” by the Japanese electronic band Capsule. The film was designed to convince viewers that it was an official music video. The catchy tune and fantastic special effects caught viewers’ attention; it was one of the best films of the evening.

“I Lived Here, Once” from Lauren Baker was up next and took home the Video Art award. It was also up for Best Documentary, but that award was handed out to “Calamity” by Stephanie Hagendorn. This film was described as “a short film shot entirely on my phone. The videos are 1–2-second clips. These were supposed to be photographs taken on my iPhone, when the video button was selected instead. As a result these quick clips accumulated video footage of my life.” The biggest award of the evening, Viewer’s Choice, was given to “Occupation Jello” by AnnaLiisa Ollila.

Some of the other films nominated for awards were “Untitled (Blowing)” by Andre Markovic and “Cold Dish” by Bora Yun. Six other films were shown as well. One of my favourites was an adorable little film called “The Walk” by Jeannie Kim, in which a cute song accompanied a little paper man on his journeys for just under two minutes.

The other films were Kelly Kornet’s “Swim: A Poem for Mississauga”, Hagendorn’s “For the Wounded”, Oscar Cordero-Graf and Filipe Santos’ “The Last Job”, Laura Krick’s “The Boat”, Huang’s “Taiwan Say Cheese”, and Adnan Bashir’s documentary “Pillars”.

Unfortunately, the event didn’t draw nearly as big a crowd as it deserved. With the free popcorn and great cinema, those who didn’t attend missed out on a great evening of films from some very talented filmmakers. For everyone else, the films can still be viewed online at the UTM Film Festival’s Vimeo channel, UTMFilmFest2013.