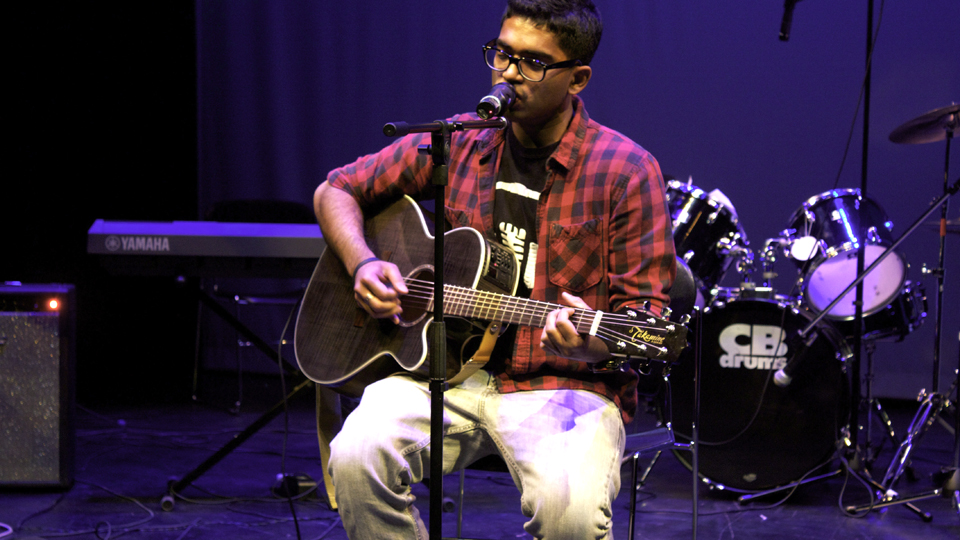 After a busy year of performance nights and projects like the Original Chords album, the UTM Music Club is celebrating UTM’s music community as enthusiastically as ever this year. Last week, they held their first open mic performance night of the school year in the MiST theatre. The event got off to a late start, but proved to be a packed and entertaining night.

UMC’s open mic nights run in a casual coffeehouse format. Various instruments, amplifiers, microphone, and wires littered the stage of the MiST, and musicians who signed up for the event were invited to come up from the crowd to perform their tunes. UMC co-president Rahul Varghese served as host for the evening, encouraging audience response and creating a welcoming environment for the performers.

The night featured songs in a variety of musical styles, from classical piano music  to multiple Led Zeppelin covers. The diversity held the attention of the audience, who showed enthusiasm and support for every performance.

Among the standouts of the night was Angela Nethersole, who wooed the crowd with her soulful take on Frank Ocean’s “Strawberry Swing”. Plucking an acoustic guitar, she seemed completely comfortable on stage and offered a lovely lilting vocal.

Nerves seemed to affect a few acts, including Kevin Tran, who conceded that he was “so nervous” as he set up for his performance, an acoustic cover of Avicii’s massively popular “Wake Me Up”. But everyone seemed to overcome most of their stage fright once they began their performance and fed off the energy of the small but excited crowd.

One act that seemed cohesive and confident from the start was the trio Nebula. Playing guitar, piano, and cajon (a percussive box-shaped instrument that the player sits on), they offered a medley of several current pop hits. Somehow, combining Lorde’s “Royals”, Justin Bieber’s “As Long as You Love Me”, Calvin Harris and Ellie Goulding’s “I Need Your Love”, and Miley Cyrus’ “Wrecking Ball” worked perfectly; the interplay between the Bieber and Harris tunes was especially strong.

Nebula weren’t the only performers to include mashups in their performance. Ronny ElShabassy and Joe Measures (performing collectively as Yalla Yalla) took the stage later in the night with their innovative guitar-driven take on Gorillaz’s “Feel Good Inc”. Combining the song’s moody, rhythmic style with Nina Simone’s soaring “Feeling Good” paid off, making for one of the most dynamic numbers of the night.

Several acts also shared their own original works with the audience, including returning UMC executive Andrew Wilson, who described his untitled song as “a sad song about being sad”. Wilson’s choice to forgo a microphone and guitar amp forced the audience to listen even more closely as he belted out the lyrics with his eyes closed, making for a stirring moment. Adam Laughton also provided one of the show’s highlights with a bluesy original song, proving equally strong as a singer, guitarist, and songwriter.

Closing the night were performances from UMC’s presidents, Zain Ali Shah and Varghese, and a happy birthday sing-along for one of UMC’s founders, Umar Syed. The finale seemed to encapsulate what UMC is all about—community. Between UMC veterans and open mic rookies, the night offered a preview of the impressive efforts UMC has in store for us this year.