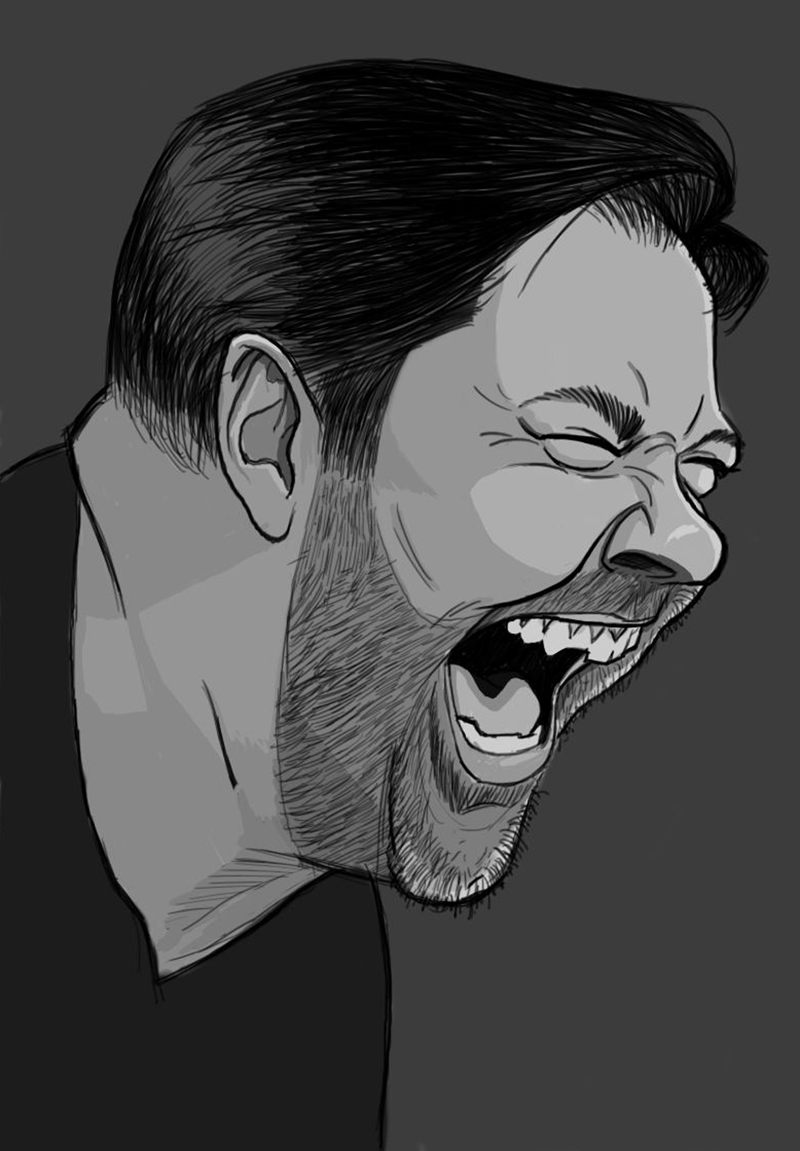 Ricky Gervais is a comedic assassin who seldom misses his mark. After last year’s wonderful performance as host of the 67th Annual Golden Globe Awards, the Hollywood Foreign Press Association invited him back to host again this year. Unlike last year, however, the HFPA wasn’t very pleased with his hosting this time around.

“I enjoyed the Globes more this year. I think I had better gags. More along the lines of the Mel Gibson one last year,” Ricky wrote on his blog. “Obviously the rumour that the organizers stopped me going out onstage for an hour is rubbish. I did every link I was scheduled to do. The reason why the gaps were uneven is because when I got the rundown I was allowed to choose who I presented to. I obviously chose the spots that I had the best gags for. They couldn’t move around the order but I could move around however I wanted.”

Ricky was, is, and will continue to be a no-nonsense kind of guy; he’s not a yes-man. He calls things as he sees them and that’s what makes him so brilliant. He sincerely didn’t care about what people thought of his shtick on stage. He said his jokes, got his reactions, and carried on with the air of a true comedian. After the show, several celebrities—including the likes of Christian Bale, Jim Parsons, Al Pacino, Heather Morris, and Billy Bush—agreed that he’s a fearless comedic genius that they thoroughly enjoyed. Even during the show, the camera caught an excellent shot of the legendary Robert De Niro having a hearty laugh at one of Gervais’s remarks.

Most celebrities, however, seemed to be forcing smiles and laughs throughout the night whenever they were in front of the camera. It’s safe to say that those who did not enjoy his bits were just being sore losers. Is it too much to ask to not take yourself so seriously for one evening? Robert Downey Jr. was a class act when Gervais introduced him as being most famous for his stays at the Betty Ford Clinic and L.A. County Jail, as he took the joke in stride and then went on to deliver his own hilariously rude speech (and zing Gervais in the process).

Even Robert De Niro, while accepting his Cecille B. Demille Award, made numerous cracks that bordered on offensive but were made in complete jest. It’s nice to see that the greats still have a sense of humour. One of the best things in life is to be able to laugh and not take yourself too seriously all the time. Hollywood elite or not, just roll with the punches. It’s one night with alcohol, fabulous clothing, and a room full of the richest and most famous folks in town—is taking a jab at your own expense too much to ask? But Gervais wasn’t just blowing smoke, as all of his remarks had elements of truth.

“Ricky will not be invited back to host the show next year, for sure,” said a member of the HFPA, adding that Gervais’s “relentlessly mean” routine could have even larger consequences. “Any movie he makes he can forget about getting nominated. He humiliated the organization last night and went too far with several celebrities whose representatives have already called to complain.” Really? Not only is the HFPA outing their bias when nominating films, but they’re making themselves seem like petty children who really can’t take a joke. Relax, please! If anything they should be thanking him, as the ratings went up 5% this year compared to those from last year’s broadcast.

Despite all the controversy, Ricky is still a brilliant comedian. Although some people would be crying themselves to sleep every night with all the backlash, he probably isn’t. He did exactly what he said he would do and the majority of viewers, if not many celebrities themselves, probably loved every second of it. Rock on,