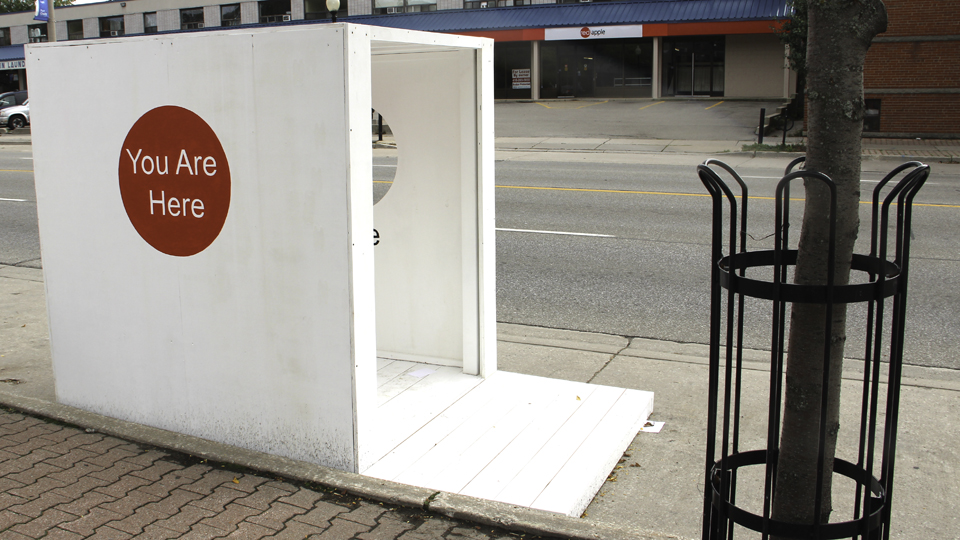 As of Friday, September 20 at 5 p.m., a modest white cube structure, inspired by the 18th-century camera oscura, humbly occupies a designated parking area on the north side of Lakeshore Road East. Emulating mall directories and subway maps that orient the lost and desperate traveler, the north face of the cube is marked with a red circle that reads in bold white letters, “You Are Here”.

Its designers, Stacey Ng Kee Song and Stacey Skiba, are both recent graduates of the art and art history program at UTM—a joint program with Sheridan College. Skiba entered the program in 2009 wishing to become a painter and had no desire to study design. However, thanks to a mandatory introduction to design class, she found she possessed a love for design after all. By contrast, Ng Kee Song (who joined the program the same year) has always been passionate about design and photography.

Due to this mutual love of design, the two Staceys found themselves working together on the year-end project for Design 3 2012/13, a course taught by Jay Wilson. The two artists were asked to propose a theoretical installation for the annual worldwide Park(ing) Day event, for which artists all over the world turn parking spaces into areas where various activities and playful sculptures draw attention to a community’s need for more recreational areas where people can sit, play, and enjoy life.

In today’s fast-moving world, it’s easy to get lost in a rigorous regimen of automatism. “You Are Here” invites the curious passerby to have a seat on a small bench, take a breath, and look around. A circular window that mimics the shape of the familiar You Are Here symbol frames the viewer’s immediate location, zeroing in on nothing in particular—a sliver of an old brick building across the busy road to the right, a darkened window of a department store space for rent on the left, a lonely tree with a black iron cage around its base somewhere between the two—yet it still gives the viewer a sense of focus that is lost without the box. Wilson, who has been teaching at Sheridan since 2001, explained that the idea of the project came to him during a Faculty of Animation, Arts, and Design meeting at which Helena Grdadolnik from Workshop Architecture presented the idea of the Port Credit Park(ing) Day initiative.

“I just thought it was a really good idea. I wanted the design students— because they’re artists—to have a project that wasn’t just graphic design […] I wanted something three-dimensional [to] introduce a bit of architectural technique into their work and possibly add breadth to their portfolio,” says Wilson.

What started out as just another project for students’ portfolios has become a minor force for change, with the combined efforts of Ellen Timms of the Port Credit Business Improvement Association, Yvonne Koscielak, the public art coordinator at the City of Mississauga, and John McCartney, the woodshop technician at Sheridan, as well as Helena Grdadolnik, Ronni Rosenburg, Jay Willson, and the Design 3 class of 2012/13.

“When we were building [the installation], Stacey Ng Kee Song was inside it […] and she was like, ‘Oh my God, it’s so beautiful inside here.’ And I looked at her and I said, ‘Well, of course it is,’ “ said Wilson. “And then I realized that as [a] designer, I’m used to realizing things or dreaming something up and then seeing it actually made. […] Students actually never get that. They see an idea, they see a kind of mock-up, then they get a mark. […] This was the first time that the students actually got to see their idea made real.”

Needless to say, Wilson is determined to have more projects from his class realized.

The designers went from a small maquette made of popsicle sticks and illustration board to a full-scale plywood product. “We were designing more of an idea rather than an actual finished product out of wood, which is very, very different. So John and Jay were awesome at that and helped make it realistic. It doesn’t look like it changed much, but there were quite a few changes,” Skiba explains.

“You Are Here” can be found on the north side of Lakeshore Road East near Elmwood Avenue until Thursday, September 26, after which the project will be transported back to Sheridan College.