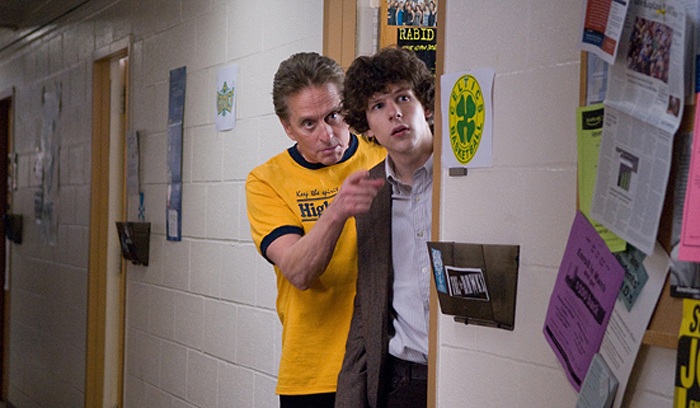 Michael Douglas as an aging womanizer. Just as uncomfortable to watch as it sounds.

After a doctor discovers an abnor- mality during a routine checkup, instead of following up, Ben (Douglas) begins a frivolous, destruc- tive midlife crisis. Six years later we find him, clad in black, continually on the prowl.

After divorcing his wife and losing his car dealerships to shady bookkeeping, Ben finds himself at a precipice. He has the opportunity to turn it all around and all he has to do is keep it in his pants. Which he probably calls slacks because hes so fucking old.

The entire premise of this movie hinged on the notion that women actually do want to have sex with
Michael Douglas. No one wants to have sex with Michael Douglas. Except for Catherine Zeta-Jones for some reason. I was just annoyed by how much of a creepy old man Douglas was playing. It was embar- rassing. But the film deserves a star apiece for Danny Devito and Jesse Eisenberg (Adventureland), who should have been in way more of the movie.
Eisenberg plays a college sophomore who Douglas takes under his wing and offers sexual guidance. This sub- plot isnt fully realized, but it remind- ed me of a movie Eisenberg made in 2002 called Roger Dodger with Campbell Scott and Isabella Rossellini. Thats a way better movie. You should go see that. If youre not a post-apocalyptic science fiction geek, you might recognize Cormac McCarthy as the guy who wrote the novel No Country for Old Men . After the Coens success with their adaptation and with much geeky anticipa- tion, director John Hillcoat has brought McCarthys Pulitzer Prize winning novel The Road to film.
Plants and animals are dead and it seems only a matter of time before humanity follows. This is the story of two meandering survivors — a man, Viggo Mortensen, and his son, Kodi Smit-McPhee — and their journey across the waste- land that was once America.
Throughout the movie we explore the human condition, examining fear and subjective morality in extreme conditions. The worst times can bring out the best in people. The opposite can also be true. Cannibal true.
My only real qualm with the film was that it seemed to end a little too neatly. This is in accordance with the book and the neat wrap- up does include a sweet perfor- mance by Guy Pearce. Something about it felt slightly tacked on, like a bit of a deus ex machina situation.
If you have read the book, you probably already plan to see this movie, if not, you should see this movie. For one its an important, well-executed film. Also, reading is hard.

Set in the 1930s, Robert Duvall plays Felix, a Tennessee hermit who turns up in town after forty years of exile. Felix wants a funeral for himself. More specifically, a wake, and he wants it before he dies.

The floundering local funeral home rises to the occasion, planning a specta- cle the town has never seen for a man they havent seen in a while. Felixs intentions are unclear, however, and the tribulations of his dark past threaten to party poop.

I thoroughly enjoyed this movie. Lucas Black, who you might recognize from Jarhead or Fast and the Furious: Tokyo Drift, (and who I always recall as the kid from Sling Blade) holds his own with Duvall and Murray. Black plays a young, straight-laced family man who works for Murray at the funeral home. His innocuous southern manner juxta- poses Murray, who plays the most charming of dirt bags. Before starting the funeral home he was a car salesman, and he treats the passing of lives as just another business opportunity.
This movie is perfect. I dont mean that in a transcendent Casablanca a la Raging Bull way. I mean that its a solid idea, delivered perfectly. It covers all its bases without getting sloppy about it.