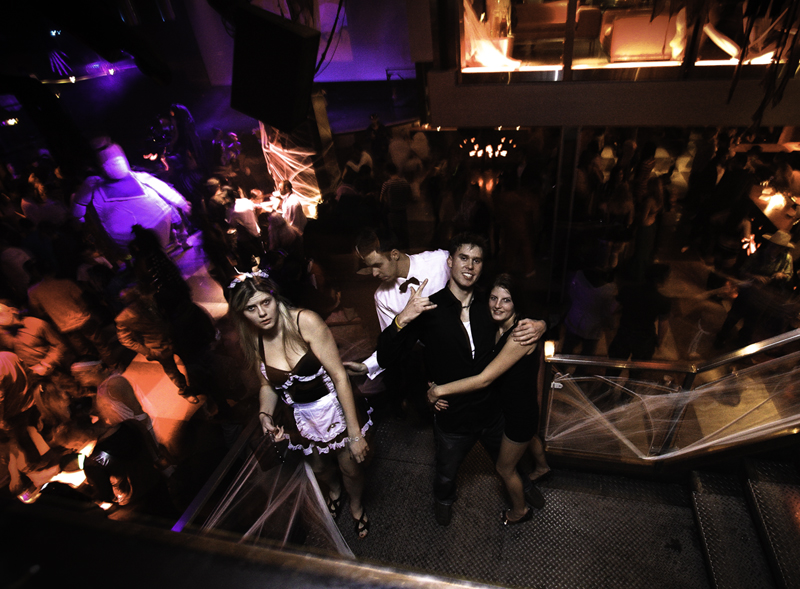 On Saturday, October 30, Guvernment Nightclub hosted one of the biggest Halloween parties in Toronto. The lineup had some phenomenal DJs, like Manzone and Strong, Mark Oliver, and Chris Fresque, while Carl Cox, Steve Lawler, and Carlo Lio dominated the Kool Haus. Thousands of people came to party at the Guvernment, and with over six rooms, 15 DJs, and 15 different sounds, the Guvernment really was the place to be. Bunnies, nerds, and soldiers were scattered in every room and enjoyed the party until the wee hours of the morning. There were even some special guest appearances by the ultimate guidette, Snooki, and the eccentric Lady Gaga (in costume, of course).

In the Acid Lounge, Chris Fresque pumped up his crowd to party hard. Since 2005, Fresque has been in the music industry playing at various clubs and making a name for himself as an electronic DJ. At the Guvernment’s Halloween blowout, Fresque played an amazing set, and The Medium got the opportunity to ask him a few questions.

The Medium: Why did you get into electronic music instead of mainstream?

Chris Fresque: I explored every music out there but never really felt a connection. It’s funny, now that I think of it; hints of electronic music were there so many times. But, being from a small town, I was unaware of the culture. The day I stepped into System Soundbar in 2002 is when I finally knew where I belonged.

TM: What has been your greatest accomplishment as a DJ/producer?

CF: Every day I succeed as a DJ/producer and every day I grow as an artist. As long as I am always moving forward, every day is a new accomplishment.

TM: When can the public expect your next track and does it have a name yet? Will it have a specific kind of sound to it?

CF: My next EP will be out in November on London Music. The label is under new management by my good friend Anthony D’Amico. It is called The 64-Bit EP. It has two tracks and several remixes. I am very excited for this release. “Tech/tribal” is the best way I can describe it.

TM: What is your favorite thing about being a DJ?

CF: The butterflies that I still get to this day and the rush that I get from performing each and every time.

TM: Who is your inspiration outside of the music industry and why do you look up to them?

CF: My mom. She is now in her late fifties and has just started another business; it’s never too late to try something new. Never give up, and do what feels right.

TM: When and why did you start creating your own hats and shirts?

CF: I just like to create and that is just another way for me to express myself. I have dabbled in other ways and am always looking for new ones.

TM: If you could play in any city in the world where it would be and what club?

CF: Ibiza. I have heard good things, but for now I am happy here. [There’s] no sound like Toronto in the world.

TM: If you had to choose a different career, what would it be?

CF: I would turn my concentration towards my clothing.

TM: How do you make a track, how long does it take, and what do you use?

CF: I go with the flow and don’t stop changing things until I know it’s right. It depends on how inspired I am. I have finished in a day and sometimes two weeks. I use Ableton.

The Medium would like to thank Chris Fresque for taking the time to sit down with us. We wish you luck on your future endeavours.

If you weren’t at this amazing show, you missed out on the best Halloween party in Toronto. So where will you be for Halloween next year? Make sure it’s the GUVERNMENT!