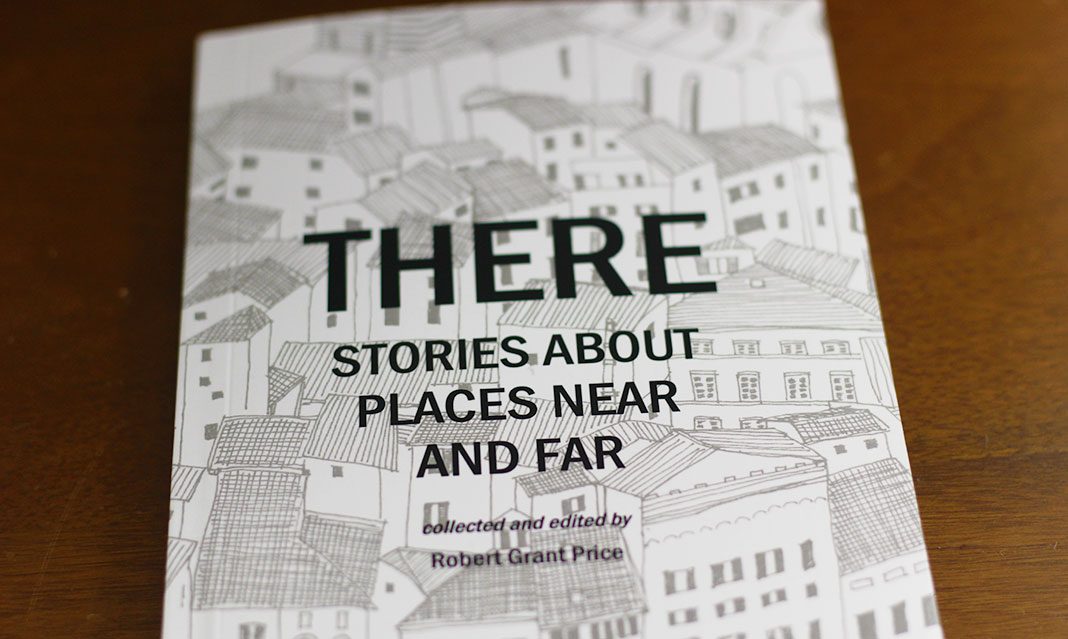 Recently published, There: Stories about Places Near and Far is an anthology written by eleven writers from the WRI370: Writing about Place course. Collected and edited by Dr.Robert Price, assistant professor in the PWC program, the anthology explores the dual nature of place: how people form places and how places form people.

In each piece, the writer conducts a thorough study of a place, its culture, geography, and language, to reveal “the elements, people, and actions that characterize the place.” For individuals, places mean different things and the context of a place can change due to maturity or the progress of time.

The writing was produced in the WRI370 course and printed in 2019. You may recognize or even know some of the writers as the textbook features work by former WRI370 students: April Joy T. Abit, Jessica Cabral, Noor Khokhar, Pauline Kioko, Raphaela Pavlakos, River Rideout, Sonia Romero Johnson, Justin Singh, Ali Taha, Janine Wright, and Cassandra Wong.

The anthology begins with an introduction by Price where he considers and reflects on what defines a person: “who they are or where they come from”? It’s a question we consider throughout the class, and while reading the stories.

He writes, “To become a place, a no-place must become a seat of collective identity and shared memory.” Price articulates that a place is more than its architectural construction, but rather a place’s character comes through the properties that make “a place unique, even peculiar.”

Reading this book feels like travelling with a friendly tour guide. Despite having never been to these specific places, the authors introduce us to the nuances, particularities, and structures that make foreign places—at least foreign to us—familiar.

What makes this collection impressive is the multiple ways the authors address the idea of place in their stories. The anthology is divided into three sections: There, Here, and Somewhere.

The quality of the stories impressed me—choosing a single section emblematic of place is an impossible task. However, some of the stories that really resonated with me—aside from the ones discussed later on—were “Ugly” by Noor Khokhar, “Catch”by April Joy T. Abit, “Mountain Climb” by Ali Taha, and “The Trail” by River Rideout for their attention to detail and their precision in capturing the essence of their places through characters, exposition, and setting details.

Beginning with Pauline Kioko’s works about her grandparent’s house in Kenya, the anthropology braids historical, geographical, and cultural properties to expand on the idea of place. In Kioko’s stories, in particular, she explores tradition through her family. She expands into the political, geographical, and cultural properties of the place while giving detailed descriptions of the country and characters.

In Jessica Cabral’s stories, selections from Love Language, Cabral explores how people make the place. The suburban house where her grandmother lives turns into ‘Nonna’s house’ through her Nonna’s impact on the Maplewood Crescent community. In the first story, “The Beginning,” Cabral details the beautiful yet complex relationship between herself and her grandmother. Spending an afternoon with her Italian-speaking grandmother, Cabral, as the young narrator, struggles to overcome the language barrier and communicate her love to her Nonna. By the final story, “The Return,” Cabral, now a young adult, returns to her grandmother’s home after it has been sold to find that it has drastically changed by the new owners. In some ways, nostalgia can add to the meaning of a place, and estrangement and changes can alter the meaning a place has to us.

Sonia Romero Johnson investigates the transformative power of a place and its ability to change a person both physically and mentally. In Johnson’s collection, The Obstacle Itself, Johnson undergoes a physical transformation at GoodLife Fitness from a flabby, self-conscious woman to a strong powerlifting athlete. Yet her strength, both physical and mental, experiences a test after an accident threatens her ability to train—she must work to overcome the obstacles within herself. As Bruce Lee says, as included as an epigraph in the story, the importance is not the obstacle as much as the reaction to the obstacle.

Revisiting Professor Price’s introduction, places can craft our identity. Although, Johnson viewed her reasons for visiting the gym as superficial, eventually the culture, atmosphere, and people in the place help her find strength within herself.

In Raphaela Pavlakos’ stories, characters’ shared values and beliefs draw them to a place—an orthodox church—yet their unique perceptions differentiate their experiences. (Un)orthodox explores the theme of belonging in a traditional place, while being a non-traditional person both in appearance and attitudes, particularly in “The Leather Mini Skirt” where the clergy criticizes her clothing choices despite her commitment to the church. The history of the church imposes its own meaning and customs on the congregants; depicting the rules on dress and behaviour.

In a study of Brampton life, Justin Singh depicts the temporality and preciousness. In “The End of Summer,” Singh comments on how Brampton has become more crime-ridden through a humorous lens. He writes of a man being shot in the butt during a drive by shooting, normalizing the violence by its citizens. Combining commentary with narrative, Singh impressively illustrates a city often regarded as an outcast.

Throughout the anthology, the number of chapters vary per section with a combination of long and short works creating movement; a journey.

Stories about places of work, such as McDonalds in the case of Janine Wright and Cassandra Wong’s work, divulge into the culture of the place. Wright’s story focuses on a quirky customers of McDonalds without any fluff or commentary; it’s routine with interesting characters. Taking a different approach to the fast-food life, Wong‘s story focuses on work culture and the pressures in a place, how it can stifle people.

All these writers discuss their places in different, unique, and thoughtful ways that emphasize the type of place they are in. Many stories masterfully weave historical and biographical information into the narrative, overlaying the place with additional meaning and messages, while others depend on characters to comment on the nature of the place.

As we debated in class, it is difficult to separate place and people; they intertwine and inform each other. Remove people from a place and the place takes on new meaning.

Fresh approaches to common places provide a new perspective on places. Whether a story on Kenya or the Philippines, a gym or a mountain, the authors do an excellent job in showcasing the multi-faceted nature of a place and its ability to shape people.