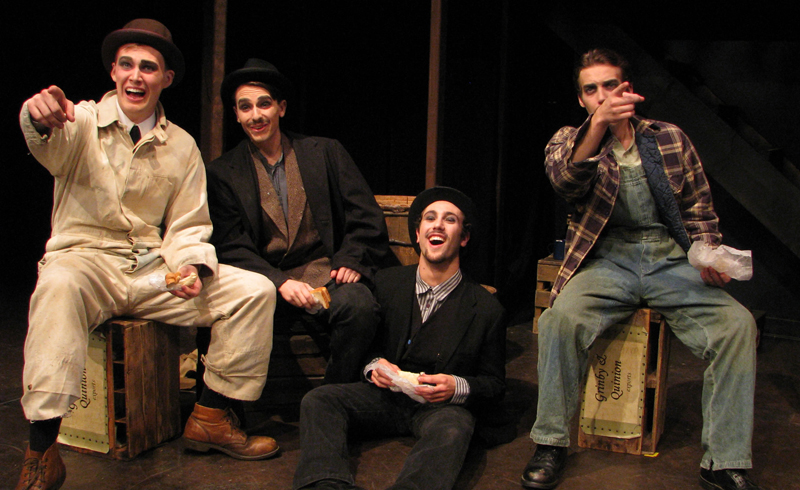 On the morning of December 6, 1917, two ships collided in the Halifax harbour. Unfortunately for everyone nearby, one of the ships (the French freighter Mont-Blanc) happened to be carrying massive amounts of explosives  on board. The delayed detonation that morning created the largest man-made explosion prior to the  invention of the atomic bomb. Nearly 2,000 lives were lost as a result of the blast, cementing the  “Halifax Explosion” as one of the  most significant and tragic  moments in Canadian history.

This turn of events makes an  effective backdrop for Theatre  Erindale’s second production of the  season, 1917: The Halifax  Explosion. Using two books as source material (Mary Ann Monnon’s Miracles and Mysteries and Janet Kitz and Joan Payzant’s  December 1917), the Erindale  Company adapted the play under the direction of former Theatre Erindale student Meredith Scott. Met with a full house on opening night (which appropriately fell on Remembrance Day), 1917: The Halifax Explosion, staged by UTM’s third year theatre and drama studies students, is part of Theatre  Erindale’s 20th anniversary “Power of Performance” season, and it turned out to be very powerful indeed.

1917: The Halifax Explosion  begins on the day before the  explosion. The residents of Halifax go about their daily business, and the audience is introduced to  several characters from all walks of life. From the local clergyman to the nurses in the hospital to the workers on the dock, the various residents of Halifax are all shown as key members of the community. Unaware of what the following day brings, they act as any unsuspecting people of the time would—they plan weddings, they prepare for the school Christmas pageant, and they fret about the war.

As the play progresses, the  devastating explosion inevitably takes place, and from that point on, the focus shifts to the aftermath of the blast. As the hospital is flooded with the injured and the local school transforms into a makeshift morgue, the day-to-day lives of the residents of Halifax are put on hold. In the face of crisis, the strength and selflessness of the characters is tested in some of the most extreme ways imaginable.

One of the most striking aspects of 1917: The Halifax Explosion is how successfully it captures the time period it covers. The costumes (by Angela Thomas, with help from a talented wardrobe crew) are beautiful, and the bold makeup (Samantha Miller-Vidal) makes the cast look as though they come from an era not quite our own. The set crew also does a fantastic job of evoking the time period with only a few simple benches, crates, and white sheets on the stage.

But while the set design may be effectively minimal, there is  nothing understated about the  subject of the play. The cast acts appropriately to convey the  ordeal their characters face, and the  results are emotional and dramatic. It’s a true ensemble piece (there are no lead actors or main characters), and every cast member plays their part well. Owen Fawcett is especially strong as the pilot of the Mont-Blanc, who offers an ultimately  futile sense of level-headedness to the situation, even up to the  moment of crisis. Fawcett’s chemistry with Andrew Si Rosa (who also excels as the colourful French captain of the ship) makes for one of the most memorable character pairings in the play.

Cassondra Padfield is another standout cast member, playing a young, nervous nurse at the local hospital, under the command of a brash superior (Carolyn  Nettleton). Meanwhile, Lindsey Middleton also makes an impression,  playing one of the show’s youngest  characters—a bouncy, excitable nine-year-old student. The show’s sprinkling of humour (mostly  during the first act) is a welcome relief from the heaviness of the subject matter, and Middleton, along with several of her castmates, proves to have a knack for comedy.

With so many characters and storylines in the play, it becomes difficult at times to keep up with all the different relationships and to remember how they all work into the story. However, the strength of the play is in the vivid, relatable inhabitants of Halifax, a large  array of characters (which requires the already healthy-sized cast to assign multiple roles per actor) that  effectively shows the bustling,  diverse spirit of WWI-era urban Canada.

Along with the characters and strong performances, another  element that helps prevent 1917: The Halifax Explosion from playing out like a history lesson is the  unexpected creative flourishes thrown in throughout the show. At carefully chosen moments, the play diverges from its fairly standard  storytelling in favour of interpretive, tableau-like scenes. Though they are obviously meticulously choreographed, these moments play out naturally, and they help to convey the emotion and strife of the characters. The performance also ends with a musical number of sorts, and the cast’s impressive harmonies make for a sombre but lovely ending to a play that expertly blends reverence and entertainment.

1917: The Halifax Explosion runs until October 20. For tickets and show times, visit utm.utoronto.ca/academic/theatre.