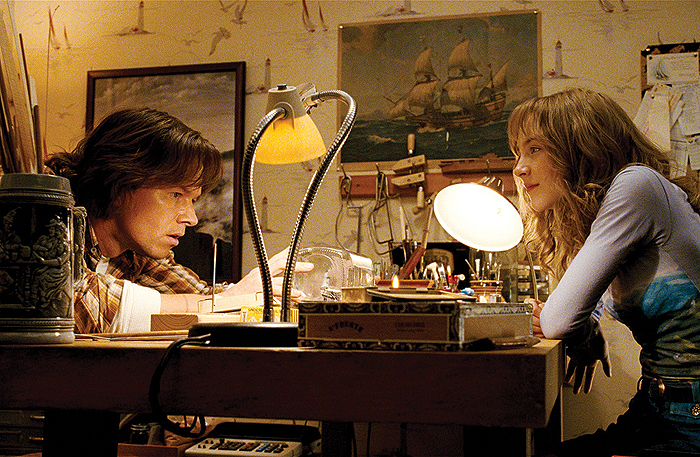 Its 1973 in Norristown, Pennsylvania, and Susie Salmon is walking home from school. She makes her way through an empty cornfield when she meets Mr. Harvey, her new neighbor. He says hes built a clubhouse in the field for the kids in the neighborhood to play in. He wants Susie to be the first to see it.

What happens next is the tragic, yet all too common, story of a childs abduction. Susie tries to scream and fight her way out, but is overpowered by the middle-aged man, who had spent weeks planning this moment.

But what George Harvey (Stanley Tucci, The Devil Wears Prada) doesnt realize is that Susie (Saoirse Ronan, Atonement) isnt quite dead and gone. She is trapped in a fantastical world between the Earth and Heaven, where she catches glimpses of the real world without her, and where her mood dictates the weather in true Shakespearean fashion.

Susie longs to get back to the real world. She tries communicating with her family and friends, and though no one hears her, they feel her presence. The film stems from this notion—that there is some unfinished business that must be taken care of before Susie can be set free from the middle ground she is trapped in.

Director Peter Jackson (Lord of the Rings trilogy) creates a visually dazzling landscape for this in-between space, one that is full of epic scenery (mountains next to beaches next to giant forests) with the help of generous doses of CGI—no doubt the reason for the films high budget. Apart from that, Jacksons script fails to adequately explain certain events and leaves many loose ends scattered throughout the 135 minute running time.

Though the film does have some mildly enjoyable moments (mostly comedic, thanks to Susan Sarandon, who plays the fun-loving, alcoholic grandmother) as well as several suspenseful turn of events, in the end there is little to take from the film that you havent already seen in a preview or read in a review. In essence, the story is an extremely simplified version of the novel, and due to  this dumbing-down, the plot loses much of its character.

Mark Wahlberg does an excellent job playing Susies father—who stubbornly continues to investigate his daughters death even after the police have stopped—as does Stanley Tucci as the antagonist. Tucci reportedly prepared for his role by studying the mannerisms and reports on several well-known serial killers and manages to make you uncomfortable on first sight. This is a good thing, considering that he is playing a child-murderer.

Great performances aside, the film would have benefitted from some clarity. The transitions from scene to scene leave many aspects unexplored and, as a result, leave the viewer unfulfilled. Though the message is technically uplifting—dealing with issues, such as coping over a loved ones death and never giving up—you cant help but feel that Jackson forgot something.