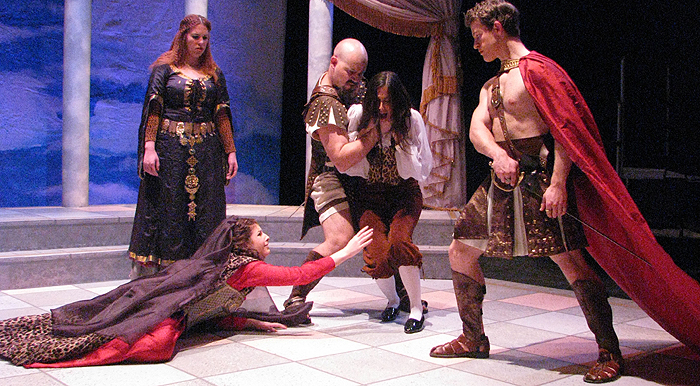 Take a French play that is set in Greece, translate it into English, et voila! Theatre Erindale’s production of Andromache is the resulting dramatic fusion, a 17th century tragedy of pride, passion and jealousy by the French playwright Jean Racine. Though an English rendition of the play is quite uncommon, Richard Wilbur’s translation is greatly construed and made all the more eloquent by the incorporation of rhyming couplets throughout many of the long, yet essential monologues within the play.

Directed by Patrick Young, the story unfolds over the course of a single day in the palace of King Pyrrhus (Darren Turner), whose status as the son of Achilles has lost him favour with the Trojans, most notably with Andromache (Melanie Hrymak). Andromache’s husband, the Trojan hero Hector, was killed by Achilles in the Trojan War. Fuelled with a bitter distaste for Pyrrhus, Andromache is taken captive by the king, along with the widow’s son and new prince of Troy, Astyanax (Brittany Kay). It becomes the responsibility of Orestes, ambassador of the Greeks (Andrew Tribe), to convince Pyrrhus to set Astyanax free, yet Orestes must also balance these efforts with his desired courtship of Hermione (Juel Hughes). Despite Orestes’ feelings for her, Hermione is betrothed to Pyrrhus, but upon word that Andromache will wed Pyrrhus instead (on the condition that he releases her son), Hermione’s raging jealousy is unleashed and she easily manipulates Orestes to do her bidding. Resulting tragedy ensues from unlikely places, and the play’s closing moments are the most surprising of all.

Comprised of fourth year students (with the exception of Adam Cresswell, a recurring second-year student whose season debuted with Widows, and second-year newcomers Brittany Kay and Jake Maric), the ensemble was much smaller than Theatre Erindale’s usual cast list and allowed greater individual command of the stage by the actors and actresses. Darren Turner stood out as the stricken king who is hated by the majority of his subjects, but also conveyed the forceful nature of Pyrrhus in his ultimate resolve to have Astyanax killed, should Andromache fail to comply. Pyrrhus’ sometimes meandering thoughts were greatly contrasted with the unwavering tenacity of his mentor, Phoenix, played by Philippe Jullian. Jullian’s firm disposition as the King’s advisor was perfectly executed, as his line delivery was both natural and aptly humorous in reaction to Pyrrhus’ thought processes.

Though the play’s eponymous hero, Andromache, was not as central as some of the other characters, Melanie Hrymak still interpreted and performed the part with such conviction that her performance outshone the character she was portraying. Strong-willed and unafraid to take her own life, Hrymak’s performance as Andromache was played with a similar vigour as Juel Hughes’ portrayal of Hermione. Extremely animated yet daunting when necessary, Hughes encapsulated the torment felt as a result of betrayed love. She conveyed this anguish extremely well: to the audience, who found humour in her wishy-washy rationalization that a woman’s angry words belie her true feelings, as well as to Orestes, whose inability to comprehend her indecisiveness led to his eventual madness.

Showing a complete transformation of his character over the course of five acts, Andrew Tribe’s performance as Orestes was one of the plays greatest performances, if not the best of all. In addition to being responsible for a large chunk of the play’s dialogue, Tribe internalized the text with such skill that the resulting speeches he gave were very natural and believable, and were aided by his emotiveness and overall immersion in his complicated character.

Though the performances were more or less on point, the overall static nature of the plot was hard to ignore, as much of the play’s conflict was relayed in words rather than in actions. Despite this, certain scenes incorporated historical dancing and music, which served to break the stagnant interaction, and the climactic ending moments of the play certainly made up in excitement. Another of the play’s minor falters was that the verse became too contemporary on a few occasions, in that the actors and actresses contracted words or emphasized them in a way that was more colloquial than the expected formal speech of regal figures. Yet, one must not forget just how difficult the execution of such an abundance of text must have been for the cast, and their hard work in the mastery of the difficult verse must be applauded.

Andromache is indeed a departure from Theatre Erindale’s more contemporary productions, and though not as strong as this season’s past performances, many intriguing elements still exist within it and will be sure to jolt a surprise or two at the very end. Andromache runs at Theatre Erindale until January 30. Visit www.theatreerindale.com for tickets, which range from $9-$14.