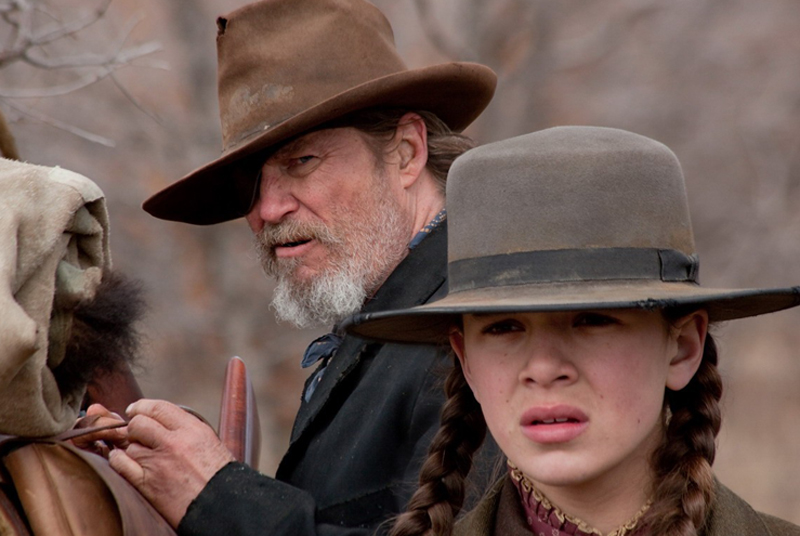 It’s usually not too difficult to spot a film made by the Coen Brothers. Even though they tackle a wide range of genres, eras, and subject matter in their movies, their films move at their own pace. That offbeat tone,  combined with a dark sense of humour and a cast of eccentric, often downright unlikeable characters, make for films that often divide moviegoers. But with their latest, unusually accessible effort, True Grit, it seems that Joel and Ethan Coen are trying to please just about everyone.

Based on the Charles Portis novel and 1969 film of the same name, the plot of True Grit is pretty straightforward. After her father is murdered, 14-year-old Mattie Ross (played by newcomer Hailee Steinfeld) seeks revenge, and hires the town’s most curmudgeonly marshal, Rooster Cogburn (Jeff Bridges), to accompany her on a trek into the wilderness to find the perpetrator. Along the way, they meet a charismatic Texas Ranger, LaBoeuf (Matt Damon), who is in search of the same man, and they expand their unlikely partnership into a dysfunctional trio.

In some ways, True Grit is more conventional than one might expect from the Coens. The most obvious comparison to their previous work is 2007’s No Country for Old Men, which more loosely fits the western genre. But while No Country for Old Men was a meditative cat-and-mouse chase built around wits and morals (or lack thereof), True Grit comes out with guns blazing, and unfolds much like you would probably expect a classic western film to do. That’s not to say that True Grit is vapid, or that it’s not interesting, but simply that it has different aspirations.

And as an adventure film, True Grit works quite well. With Mattie’s calm, calculated thirst for revenge, and Cogburn’s sloppy volatility, their relationship is a constantly enjoyable push-and-pull for power. Their banter is sharp, and the bond that forms as they overcome various obstacles feels natural.

This is largely thanks to the film’s performances. Cogburn may be something of a one-dimensional oaf, but Bridges clearly has a lot of fun playing the booze-swigging marshal. In addition to providing many of the film’s punchlines, Bridges also adds an undercurrent of danger, which makes the body count of Cogburn’s past (outlined in a fantastic courtroom scene early on) seem logical.

The performance from Steinfeld is more uneven, but also more complex. She sometimes comes across stilted—perhaps this could be attributed to her stone-faced character—yet also manages to deliver great emotional heft in a couple of the film’s key scenes. But while many critics have lavished Steinfeld with praise, the real star here is Damon. The idea of the man who played Jason Bourne, here sporting a Texas Ranger outfit, growing a very impressive moustache, and adopting a Texan drawl may seem dubious, yet Damon’s magnetic screen presence seems to have no limits. While the other actors largely stay within the confines of a few character traits, Damon takes LaBoeuf in many different directions; he’s charming, creepy, heroic, and funny all at once, making each of his line deliveries and reactions a highly enjoyable surprise.

Another hallmark of the Coens’ work is their distinctive visual style, and while the camerawork in True Grit may be fairly subdued by their standards, it’s still quite a few steps above the usual action movie fare. They take great advantage of the changing Arkansas seasons, and the periodic snow flurries they capture manage to create a strangely serene, beautiful tone amidst the gunfire. The Coens always make their movies interesting to watch, and from the simple preparation of an oversized hat to a frantic horse ride near the end of the film, True Grit is visually dazzling.

This is thanks in no small part to cinematographer Roger Deakins. As well as working on most of the Coens’ films, he was also the director of photography for The Assassination of Jesse James by the Coward Robert Ford, Doubt, and A Beautiful Mind, among many others. With eight unfulfilled Academy Award nominations to his name, this may finally be Deakins’ year, and it would be a worthy win.

True Grit may not break any new ground, but it is a visually compelling, well-acted film. It moves along at a brisk pace and goes big with the action scenes, and in the end, it’s a satisfying, high-quality holiday blockbuster.