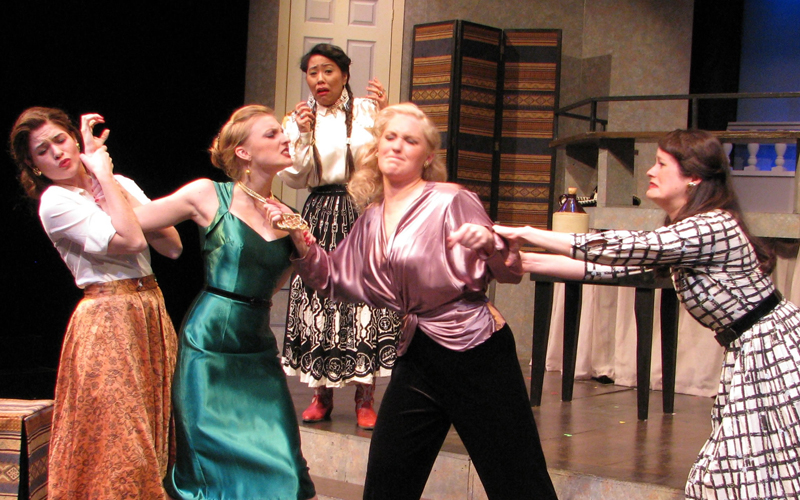 Cue the lights, strike a pose, and make your fabulous entry into New York high society of the 1930s, dahling. Theatre Erindale’s production of The Women, Claire Boothe Luce’s 1936 satire about Manhattan socialites as they “cope” with divorce, infidelity, and gossip, wastes no time in setting the posh mood and witty exchanges between its central characters.

Sylvia Fowler (Sheelagh Daly) is a refined and well-dressed society woman who loves to gossip (she positively thrives on it) and looks for any opportunity to spread it around town. Her vainness and rumour-mongering eventually earn her a rather unpleasant reputation, yet the others in her circle, while not as lustful to uncover scandals, are by no means innocent of listening in on such affairs. Speaking of affairs, there are plenty of those too. The main protagonist, Mary Haines (Laura Jabalee), is happily married with kids, until she learns that her husband is actually cheating on her with a less affluent homewrecker named Crystal Allen (Brittany Adams). Calm, cool, and collected, Mary confronts Crystal, but instead of scaring away her husband’s mistress, she makes the difficult decision to file for divorce and move to Reno with the children in the hope that her husband will see reason and want her back. But when he announces he will marry Crystal, she realizes that after 12 years of marriage, she won’t give up without a fight. Not literally, of course; that only happens between Sylvia and Miriam Aarons (Kelsey Jenkins), who have their own problems involving Mr. Fowler, and consequently find themselves in a full-on brawl, complete with slapping and hair-pulling.

Terry Tweed’s successful direction of “the classic modern satire of divorce” is seamlessly executed and effectively captures the various ways in which women reflect on their roles in a male-dominated society.

With a stellar performance by the all-female cast, the audience doesn’t have to wait long for hysterical moments to unfold. In addition to the amusingly venomous banter, the elaborate props enhance the entire performance, such as when Adams is pushed onto the stage inside a full-size bathtub, which had the audience roaring with laughter and applause when unscripted blobs of foam started flying through the air. There were many moments of improvisation throughout the performance which were expertly handled, such as multiple earrings flying off and being reclasped while speaking, and even a startling stumble up the stairs that looked as if it could have been planned.

Laura Jabalee gives a great performance as a woman torn by her husband’s unsuspected infidelity, offering a three-dimensionality to her character; she both conveys a convincing sense of heartbreak that got the audience on her side, while managing to rise into a triumphant position of power in the closing moments. She succeeds as both a mother to Young Mary—Meghan Barron conveys a great childlike wonder as her character struggles to understand the situation her parents face—and as the daughter of Mrs. Morehead (played by Emily Johnston, who also gave a committed performance as a mother experienced in such marital issues). Brittany Adams commands the stage as a woman who believes she can get whatever and whomever she wants, and perfectly captures the essence of “the other woman” that so many wives loathe. Sheelagh Daly proves to be one of the most entertaining actresses, and in addition to completely immersing herself in her vain and catty role, she leaves the mark of Sylvia Fowler on every situation of which she is a part. Chrissy Chau’s incredibly humorous portrayal of the hopeless and clueless romantic Countess de Lage is outrageous, charming, and a real crowd-pleaser, while Tanya Filipopoulos’s performance as Nancy Blake, a writer with an audience of two readers, is perfectly candid and full of dry, deadpan humour that the audience loved. Amanda Piron also stands out as the exhausted and melodramatic Edith Potter, a woman who constantly complains about having children, yet always ends up pregnant again. Along with the other main characters, she constantly offers advice to Peggy Day (Michelle Nash), a young wife inexperienced in marital affairs. Nash gives a strong performance as Peggy, a woman hopelessly in love and who longs for a baby of her own, and really takes her character to its peak when she calls out her “friends” for seemingly ruining Mary’s marriage with their frivolous gossiping. Kelsey Jenkins enlivens the sombre mood in Reno with her duplicitous character, acting as a confidante to Mary while also pursuing her own desires, namely Sylvia’s husband.

Charlotte Cattell (Jane) and Brenna Stewart (Maggie) give a very memorable and endearing performance as two of Mary’s house servants, with Jane theatrically relaying the gossip to Maggie. Stewart also plays a few other supplementary roles, as do Alison Hunt (among others, the bitter secretary of Mr. Haines), Amelia Kurtz (a particularly strict exercise instructress), Brittany Kay (the intimidating Russian model, Princess Tamara), Alanna Boucher (an oblivious pedicurist who spills the beans about Haines’ affair), Kylah Thompson (the housekeeper in Reno who takes in divorcees), and Jessica Allen (the nervous model who fails to impress her boss). The performance also features the introduction of second-year newcomers Lindsey Middleton and Carolyn Nettleton, both of whom give solid performances that are on par with their more experienced co-stars.

Patrick Young’s set design features a very swift and lovely transformation from upscale New York with its art nouveau room dividers, to a westernized Reno with its zig-zag patterned tabletops, and the changes in music—from jazz and swing to banjos and harmonicas—work to complete the switch of scenery and mood.

Although Booth Luce’s original play hit the stage exactly 75 years ago, the timeless tale of marriage and its tribulations remains an incredibly popular topic because of its prevalence in today’s society. Whatever a woman’s status, the problems she faces in her marriage are universal, and the larger burden rests on her to try and repair them, or give up on the relationship altogether. The Women portrays the topic in a satirical way that often pokes fun at the trivialities of marriage, yet at other times it reminds wives that such issues must be addressed head-on if they want to save their relationship.

The Women runs from February 15 to 19 at Theatre Erindale; visit theatreerindale.com for tickets and show times.