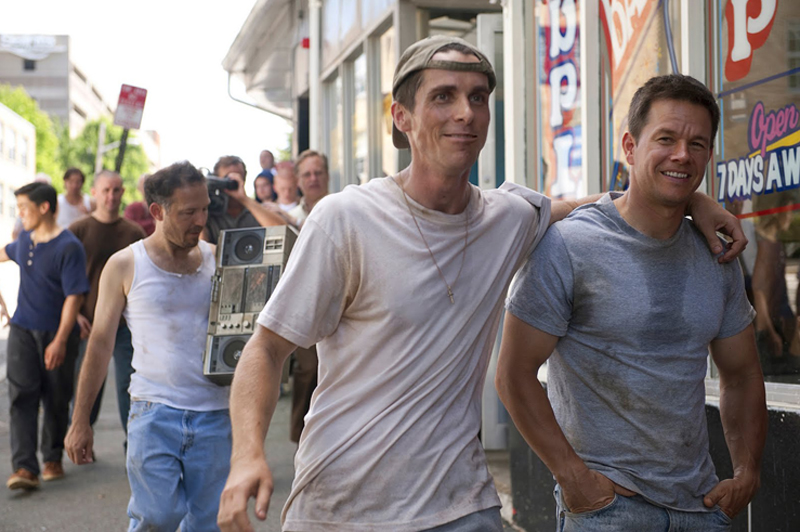 “I started a joke, which started the whole world crying, but I didn’t see that the joke was on me—oh no,” sing Christian Bale and Melissa Leo in one of the most touching moments on film this year. The truth is, the joke is really on us, as The Fighter is not your typical “boxing” movie the likes of which we’ve seen the past. With boxing movies becoming as popular as ever, many films have garnered great critical acclaim by focussing on the subject of the violent sport, from classics such as Rocky and Raging Bull to recent hits like Cinderella Man and 2005 Best Picture Million Dollar Baby. However, in David O. Russell’s The Fighter, though it’s marketed as a gritty sports drama, so much more is brought to the table.

Based on true events, The Fighter is first and foremost a story about family; the story centres around real-life boxer “Irish” Micky Ward (Mark Wahlberg), his mother and manager Alice (Leo), his half-brother Dicky Eklund (Bale), his father (Jack McGee), and his seven sisters. Micky is a boxer who is nearly at the end of his run. Often called the “stepping stone” for other rising boxers to gain an easy win from, Micky is tired of being a loser, and is ready to end his career. However, things start to turn around after a couple of surprise victories, with support from his new girlfriend Charlene (Amy Adams) and advice from his crack addict older brother who is a former boxer himself.

Though the story of Micky Ward is about his boxing career, what is much more interesting is his abnormally large, dysfunctional family, and all the love that still manages to go around in such a strange household. The film has its light, hilarious moments, such as Micky’s sisters’ open hatred towards his relationship with the local bartender and tough girl Charlene, but also has its dark and emotional moments as well.

With one of the most stellar casts of the year, the performances in this film will be sure to create the most buzz. Everyone gives their all, and this movie has Oscar written all over it. The most standout performance of them all comes from Christian Bale, who gives his best performance to date, and that says a lot considering his stellar repertoire. It’s a shame that it has taken him this long in his career to get some real recognition for his work, but if his portrayal of Dicky Eklund doesn’t get win him the Oscar for Best Supporting Actor, it would be one of the biggest snubs in history. Melissa Leo and Amy Adams are at the top of their game as well, and even Mark Wahlberg gives a strong, underrated performance as the lead role in the film.

This movie is one that should please all audiences, as it has a perfect blend of comedy and drama, and has a true heart at its core. You are not bombarded with the actual sport of boxing, as this film is more about the process than the end result. It’s beautifully directed and has a real atmosphere to it. The audience is pulled into the Americana lifestyle of Lowell, Massachusetts, ripe with an authentic 1980s vibe. It’s a truly well-rounded film that is strong in every technical aspect, but goes far beyond technicality.

At its heart, The Fighter is about perseverance, not just in career, but in all facets of life. It demonstrates the importance of family, but also the importance of independence, and in doing so it stands as one of the best movies in a very strong year for film. The movie draws the audience right in; we go on the journey with Micky, and in a strange way we are able to relate to the crazy events of his life and his family, because even though it’s all really out there, it’s extremely real. And that’s no joke.