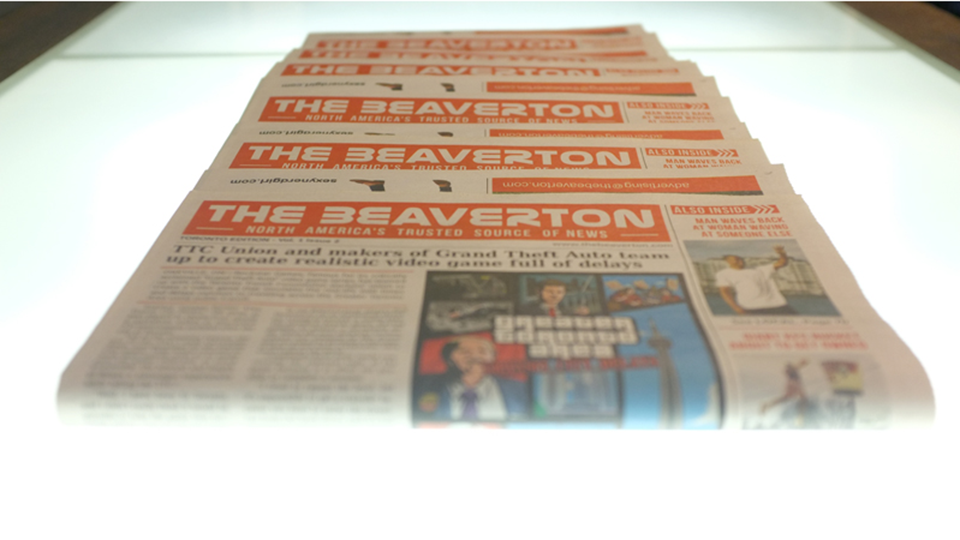 The TTC is not funding Grand Theft GTA, an all-male team of scientists did not declare nudity to be “awesome”, and Bob Rae did not try to pawn the Liberal Party of Canada for $25 and a bust of Liberace. Instead, these are some of the stories published by The Beaverton, known as “North America’s Trusted Source of News” (trusted, at least, according to The Beaverton).

The Beaverton is Toronto’s leading native satirical newspaper. It can be found in cafés, bookstores, and pubs downtown, as well as online at thebeaverton.com. The newspaper is the product of Laurent Noonan, a U of T graduate, beaver costume owner, and generally funny guy. Noonan has published two print issues of The Beaverton and is planning a third for release in the next few months.

The Beaverton is a long-planned enterprise for Noonan. As former editor of The Toike, U of T’s engineering/humour paper, Noonan tried to get a proto-Beaverton started up years ago, but was unable to while his peer group were getting jobs and families. After three years of self-taught web design, graphic design, and volunteering with campus newspapers, he launched The Beaverton’s website and began networking for new writers. After another two years scouring for writers and content, he now has a dedicated team of funny people writing for the site and occasional print issues.

The issues are modelled on traditional metro-style newspapers. The layout has confused some people, who have come across them on the subway and taken headlines like “New study shows depression linked to sharing office space with Dave” to be genuine news.

When he created The Beaverton, Noonan’s goal was to bring Canadian content to satirical news. “I’ve been a big fan of The Onion ever since my high school creative writing teacher had us study a few of their articles. He made us read ‘Study reveals: babies are stupid’,” he says. “I thought I’d try to mimic their model within Canada, seeing as how they don’t target Canadians with their content and advertising. Especially since they [didn’t] distribute free print copies over here.”

“Craft” is right. Noonan says that writing fake news is a different game from traditional standup. “With live comedy, you have a room full of people instantly letting you know if something is funny or not based on the reactions you get. I think it’s harder to write funny, because it’s harder to find people who’ll take the time to read your stuff and be able to explain why it isn’t funny.”

In the past months, Noonan has advertised The Beaverton with a beaver costume and a volunteer writer handing out copies of the paper on campuses across the GTA. The beaver mascot—“Castro”, as he is called—managed to attract a few interested readers. However, when winter rolled by, Noonan and his team had to fall back on more traditional grassroots advertising: establishing ties with coffee shops and bars in the city for distribution, and planning a few books of article collections and a style guide.

Before the third issue is released, readers can read some of the articles in advance on the website. For example, they might be intrigued to discover the article “Study finds comedians make better lovers”, which claims, “A comedian is the most suited of any profession for threesomes, foursomes, or any number which does not exceed the room’s fire safety code.”

Hey, it comes from North America’s Trusted Source of News.

(Full disclosure: a couple of months ago Amir Ahmed had a few articles of his own in The Beaverton. You should probably check them out and give him hits. Especially the Bob Rae one. Haha. That’s a good one.)