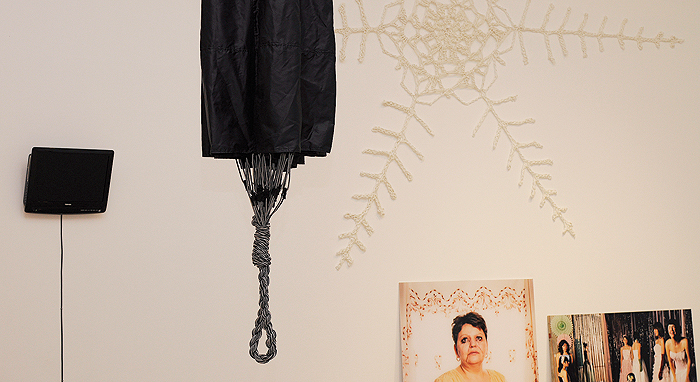 To fall encompasses a multitude of actions: to fall in, to fall out, to fall through. This season, the University of Toronto Mississaugas Blackwood Gallery invites its visitors to explore the complexity of falling and the many ways a person or object may fall.

Fall Out/Fall In—a two-part show—showcases art works by eighteen distinguished artists. According to Christof Migone, the Blackwood Gallerys director and curator, the show explores falling as a transition process. Falling often implies a transition where there is no turning back, said Migone. It is a theme that is richly layered, from the physiological to the metaphorical.

When asked about the theme of the show, Migone explained that his starting point came from the fundamental understanding that gravity holds us in place no matter how much we attempt to circumvent it. According to Migone, to fall is to enter the reality of our condition on this planet.

Fall Out, which opened on September 14, features the works of nine artists exploring gravity and breathing. For the second part of the show, Migone selected nine new artists to respond to the works of Fall Outs nine original contributors.

Some of Fall Ins most impressive works include those by U of T art and art history graduate Alison S.M. Kobayashi. Kobayashis Self-Made Parachute is a handmade 15-foot by 30-inch parachute. This work responds to Paul Litherlands skydiving videos in Force of Attraction and Freefall Fighters.

In addition to creating the parachute, Kobayashi was commissioned by the Blackwood Gallery to produce an image to be displayed in the Bernie Miller Lightbox—the billboard located outside of the South Building at the end of the Five Minute Walk. In keeping with the theme of falling, Kobayashi created The Seven Inch Fall—a self-portrait of the artist collapsed flat on her face—which will be on display for the duration of the academic year.

Annie Onyi Cheung, another U of T graduate, was also invited to contribute to Fall In. Cheung was chosen to respond to Simone Jones Perfect Vehicle—a remarkable 11 foot-long, three wheeled vehicle, controlled by the passengers breathing. Cheungs response: a poetic video depicting the rise and fall of human bodies as they breathe.
Gillian Collyer created a massive, beautifully intricate, crocheted snowflake in response to Kristiina Lahdes Delete. The latter is a long piece of computer paper, hole-punched several times with the word delete.

Sophie Bélair Clément responded to Tom Shermans Hyperventilation piece (1970)—a controversial video in which Sherman makes himself hyperventilate and eventually collapses. Although the original video has been lost, the Blackwood Gallery displays Shermans detailed description of his self-inflicted agony as part of Fall Out. In Fall In, Clément responds with a written description of the interesting process it took to obtain information about Shermans three performances of Hyperventilation piece.

Bringing a touch of comedy to Fall In, Roula Partheniou created Caution Yellow, a to-scale replica of a banana peel responding to the Zilvinas Kempinas O Between Fans, a flimsy cassette tape flying indefinitely between two large metal fans. Parthenious work suggests perhaps a different way to fall: the all-too-famous slip our favourite comedy and cartoon characters can never seem to escape.

Thorpe also created Bachelor Stick, a single stick painted pink that has been purposefully dropped outside of the Blackwood Gallerys conventional exhibition space with the purpose of inviting visitors to explore the inner works of the exhibition.

Fall Out/Fall In runs until December 13. For more information, including the Blackwood Gallerys hours of operation, visit http://blackwoodgallery.ca.