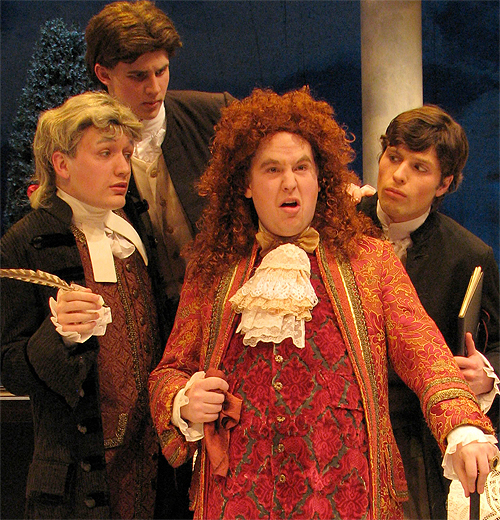 Since its inception in 1993, Theatre Erindale has staged over 75 productions, including its recent adaptation of The Clandestine Marriage, which closes out the season this week. Remaining true to this year’s theme of “Violations,” David Garrick and George Colman’s 1766 comedy recounts the tale of a wealthy young woman named Fanny (Sophia Fabiilli), who loves a simple clerk named Lovewell (Mark Johnston). Fanny cannot tell anyone about their relationship (except her exasperated maid Betty, played by Nora Williams) for fear that her father, the overindulgent, money-obsessed man Sterling (Keegan O’Conner) will disapprove of Lovewell’s less-than-affluent status and therefore forbid their union.

Meanwhile, Sterling’s elder daughter, Betsy (Kathryn Alexandre), excitedly busies herself with thoughts of dresses and diamonds as her wedding to Sir John Melvil (Andrew Soutter) approaches. But when she unexpectedly catches her betrothed holding the hand of her younger sister, she vows to exact vengeance of the most extreme kind on Fanny. Sir John openly declares his love to a slightly horrified Fanny, confesses this infatuation to a flabbergasted Lovewell and later speaks of it to his uncle, Lord Ogleby (Kevin Owen), who has his own ploy to make Fanny Lady Ogleby.

Yet more characters are thrown into the complicated mix and fuel the transgressions even further through their humorous and bold personalities. The refined and “qualatty” advocating Mrs. Heidelberg (Rachelle Magil) favors her bitter niece Betsy, frowns upon the innocent Cinderella-like Franny, and orders the housekeeper (Jenny Rockman) around, much like the Queen of Hearts does to her disciples in Alice in Wonderland. There is also Lord Ogleby’s lovable Swiss aide, Canton (Paolo Santalucia) who, through his finicky manner and quaint French phrases, supports his aged master’s ridiculous attempts at appearing younger and desirable to the ladies. Late night romps between Brush (Michael Twyman) and the chambermaid (Laura Jabalee) add to the secretive intrigue of plot, and the property distribution encounters between a trio of lawyers, played by Cameron Laurie, Phillip Stonhouse and Jack Morton, served to contrast the amorous nature of the two households.

The usual control room disclaimer that reminds the audience of some pre-show rules was ingeniously replaced when Soutter addressed the crowd, repeating the same rules in cleverly crafted, English-accented verse. Playing off an elaborately constructed set, the cast expertly remodeled the stage each time the plot called for a new scene, as they moved chairs and tables around rhythmically while singing to a Victorian tune. Another harmoniously in sync feature was the tableau of characters with their umbrellas raised and backs turned to the scenes unfolding between Betsy and Fanny. These characters exhaled deeply after a confrontational or troublesome exchange.

Many entertaining moments took place, such as the audience’s bewilderment when Sterling drinks a glass of peppermint water that Lord Ogleby may or may not have used as mouthwash, or when the entire group was about to break down the door of Fanny’s room in order to reveal Melvil hiding inside, only to jump out of their skin when he turns up beside them.

Under the skillful directing of Peter Van Wart, the entire ensemble gave a memorable performance. Each individual role was so well acted that the talent of the actors made the play. Not only were their attempts at a wide variety of European accents spot on, but their strong character portrayals had such conviction that each cast member truly brought something original and essential to the success of the collective effort.