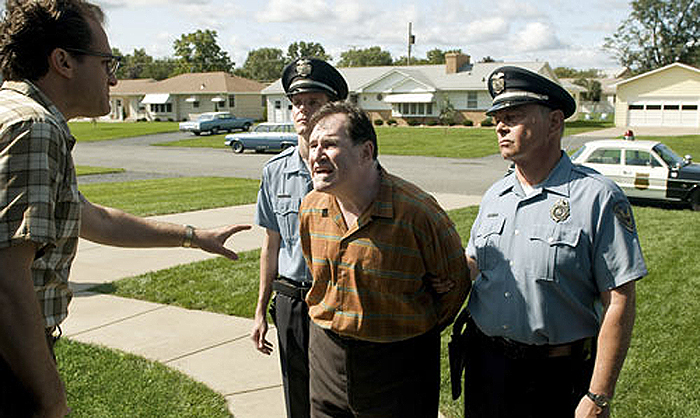 Another TIFF has come to a close, with the awards ceremony ending as I write this. This past week marks the end of festival parties, where quasi-celebrities mingled with industry folk and had awk- ward conversations with three- drink-deep volunteers. The good celebrities (you know the ones Im talking about) went to better par- ties, the likes of which a volunteer pass or a lowly press pass would never suffice to gain entry. I never got to meet Natalie Portman.
In addition to scads of outstand- ing (and not so outstanding) films from across the world, this years festival saw the announcement of Bell Lightbox. At the northeast cor- ner of King and John, the Lightbox stands five stories tall and spans an entire city block. It will be the new home of TIFF.
Scheduled to be completed in a year, the Lightbox will have five cinemas, three all-purpose studios, three galleries and a restaurant, cafeÌ� and lounge. The complex will also serve as a student and scholar cen- tre, where there will be a research room named after Canadian TV veteran Brian Linehan. Finally we wont have to walk all the way from the Cumberland Theatre to the Varsity to catch two shows in an evening. Tedious. In all seriousness, the Lightbox will become a Toronto staple and change the face of TIFF indefinitely.
The property at King and John was a gift from the King and John Festival Corporation (KJFC). You might know it better as the Reitman familys company, headed by Canadian director Ivan Reitman. With the Reitmans and with the province of Ontario behind it, Bell Lightboxs completion and the cre- ation of a world-class festival home base is all but a certainty.
As the excitement dwindles, I lay my head down to dream of next years festival. A central area for which the festival to exist in will surely increase my chances of meet- ing Natalie Portman, right? There will still be all the gala screenings at the Visa Screening Room and Massey Hall… I bet shes nice in person, and smart. Did you know she went to Harvard?
As I nod off, I lament the films I never saw, whose regular release Ill have to wait for. I console myself with the age-old TIFF ending adage: This festivals passing be not one to grieve, only 350 more days until next TIFFmas eve. As I was leaving the theatre, I heard a man pontificate about the bril- liance of Joel and Ethan Coen. He said, They captured a time and place so specifically… brilliant! I was never part of a Midwestern Jewish community during the mid- sixties so I cannot attest to that, but Im fairly certain that guy couldnt either.
Tony Award nominee Michael Stuhlbarg plays our protagonist, Larry Gopnik. Its fine if you dont know who Stuhlbarg is; the cast of the film is largely unknown. The kids that they got to play Gopniks children were actually found through an open casting call at a Jewish community centre. And theyre perfect.
Larry Gopniks life is falling apart. His son is stealing from his daughter to pay off the school bully and his daughter is stealing from Larry to save up for a nose job.
These are the cutesy problems. Larrys wife is leaving him for an asshole, while a Korean exchange student is blackmailing him for bet- ter grades and putting his tenure in jeopardy. These are the less-than- cutesy but more hilarious problems. On Larrys couch is his fat, unem- ployable, cyst-draining brother who is ultimately forced out of the house with Larry in tow. Instead of questioning why he should put up with all of this, Larry questions what it all means. In his search, he consults three rabbis, none of whom are particularly helpful. Its abrupt and real and horrible. But
you know, funny. We dont finish on a Sam Eliott
smoke-and-whiskey voice over, wrapping everything up. Rather, the film ends in a No Country for Old Men fashion, practically mid- sentence. Its like the time— Leslie: My name is Evil

The only thing I was told about this movie before seeing it was its crazy. This is pretty accu- rate.
The film follows Leslie (Kristen Hagar), a disciple of Charles Manson, and Perry (Gregory Smith), a juror in his trial. We watch Leslies descent from home- coming princess to her trial and conviction. Meanwhile, across the courtroom, Perry, the all American Christian in a cardigan (think Dick Grayson), quietly falls in love with her.
A film surrounding a murderous cult lead by one of the most infa- mous criminals of our time is bound to be a bit crazy. What made this film especially odd was its style and approach. It makes some bold statements while main- taining a campy fun atmosphere. The film parallels the senseless Manson family murders to the slaughters in Vietnam. It also infers that war-supporting, Christian Americans beliefs are just as arbitrary as an antiestab- lishment cult followers. But you know, fun. Seriously.
Its sort of like how hard drugs are glamorized in film but are ultimately shown to be wrong. In Trainspotting, Requiem for a Dream, Blow or what have you, we see the consequences of these ille- gal substances, but not before they are shown to be very desirable.
In Leslie: My Name is Evil, the ultra sexualized life of a Manson cult member is shown the same way. And were talking about murder. However, without the commitment of a realist film, were better able to take in the subject matter lightheartedly, despite its actual weight. Robert Duvall and Bill Murray are awesome.
Robert Duvall plays Felix, a Tennessee hermit who turns up in town after forty years of exile. Felix wants a funeral for himself. More specifically, a wake, and he wants it before he dies.
The floundering local funeral home rises to the occasion, planning a specta- cle the town has never seen for a man they havent seen in a while. Felixs intentions are unclear, however, and the tribulations of his dark past threaten to party poop.
I thoroughly enjoyed this movie. Lucas Black, who you might recognize from Jarhead or Fast and the Furious:
Tokyo drift, (and who I always recall as the kid from Sling Blade) holds his own with Duvall and Murray. Black plays a young, straight-laced family man who works for Murray at the funeral home. His innocuous southern manner juxta- poses Murray, who plays the most charming of dirt bags. Before starting the funeral home he was a car salesman, and he treats the passing of lives as just another business opportunity.
This movie is perfect. I dont mean that in a transcendent Casablanca a la Raging Bull way. I mean that its a solid idea, delivered perfectly. It covers all its bases without getting sloppy about it. This is the quasi-true story of Mark Whitacre, Matt Damon, a VP at one of the largest agri-businesses in the US. After becoming aware of a price- fixing scam within the company, Whitacre opts to become an FBI informant. To which he is not well suited, as he cannot keep his mouth shut or his story straight.
Frankly, I was a bit bored. Soderbergh has a knack for making his characters, even the super human Oceans Eleven ones, fallible and, as such, endearing.
Matt Damon is fantastic to this capacity and very funny. The best parts of the film are his non sequitur
voiceovers outlining random facts and arbitrary Jack Handy style insights.
The first half of the film is enjoyable. But because its a film about a patho- logical liar, the plot moved around too much before spiraling out of control. This did illustrate the life of a liar quite well, but I found myself losing interest in the characters because of it. I no longer knew who to empathize with.