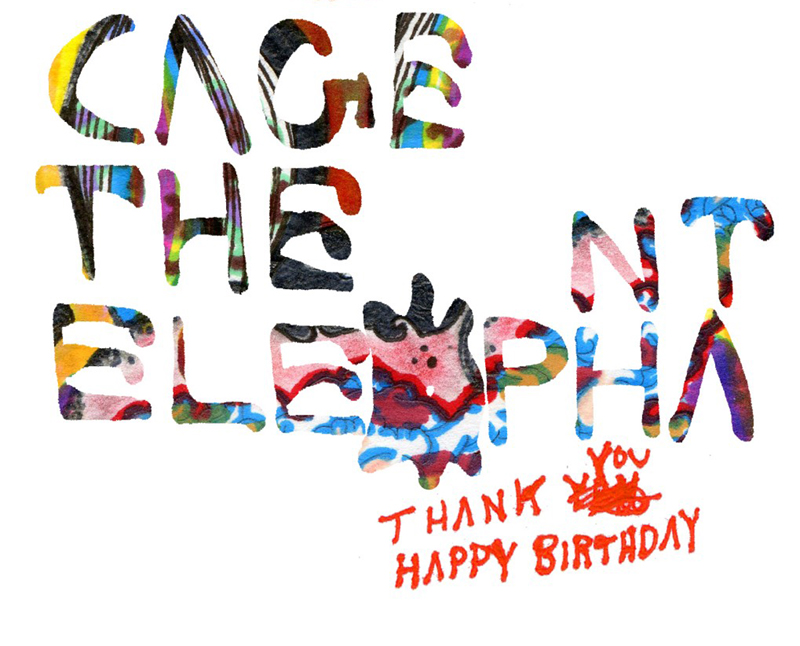 Kentucky quintet Cage the Elephant made a splash in 2009 with their breakthrough single, “Ain’t No Rest for the Wicked”, a quirky little song with roots in everything from folk to funk. Now on their new follow-up album, Thank You, Happy Birthday, Cage the Elephant have clearly evolved their sound. But while they sound more polished on this album, the band has obviously also been heavily influenced by a few other rock acts—most notably, The Pixies.

As far as influences go, a young band could do a lot worse than look up to The Pixies. Many successful acts have had that same reference point. For example, Kurt Cobain admitted in interviews that many of Nirvana’s songs were based on The Pixies’ “soft/loud” song structure (where low-key verses would build to an explosive, “loud” chorus).

But we’re talking about more than a few punchy choruses and surf-rock bass lines here. The Pixies’ influence is obvious on most tracks on Thank You, Happy Birthday, and two of the songs here (“Around My Head” and “Aberdeen”) sound like they’re straight off The Pixies’ own sophomore album, 1989’s Doolittle. Lead singer Matthew Shultz even morphs his usually reedy tone to match the primal snarl of The Pixies’ singer, Black Francis, on several occasions.

As well as The Pixies, shades of the Violent Femmes, The White Stripes, The Libertines, Arctic Monkeys, and several other alt-rock acts can be heard across the album.

To be fair, though, Cage the Elephant does attempt to mix styles. From the hazy dance-rock of the opening track, “Always Something”, to the acoustic balladry of “Rubber Ball”, Thank You, Happy Birthday explores a wide range of genres.

But that experimentalism doesn’t always work. Some sneering tracks lose the band’s sense of fun, like “Indy Kidz”, which begins to feel tiresome somewhere around the second verse. Not every style that they attempt suits them, and the band’s constant genre-hopping gives the album a slightly choppy, frantic feel at times. So if some tracks are too derivative and others too experimental and unfocussed, what does this album get right? A lot, actually. Though garage-rock offerings such as “2024” may be conventional, they succeed because they highlight the band’s obvious exuberance. Similarly, “Aberdeen” is full of gleeful energy, and the massive chorus showcases the band’s knack for melody.

And the lead single, “Shake Me Down”, may be the album’s high-water mark. It manages to combine all of the band’s influences into one song to create something that actually sounds fairly fresh. And though the song switches gears several times throughout, the mix of styles never feels manic. It’s like a synopsis of everything the band seems to want to accomplish. If they could channel all their ideas like they do in this song into a whole album, they could create an even more impressive and cohesive collection of songs.

These obvious comparisons to other artists may annoy some listeners, but I found that Cage the Elephant uses these alt-rock checkpoints to craft themselves an effective new sound. At least half the album’s songs are very good, and the band proves that they know how to write a hook. The album would benefit from more focus and consistency, but in terms of sheer enjoyment, Thank You, Happy Birthday is a surprisingly strong effort from this young band.                     ★★★½