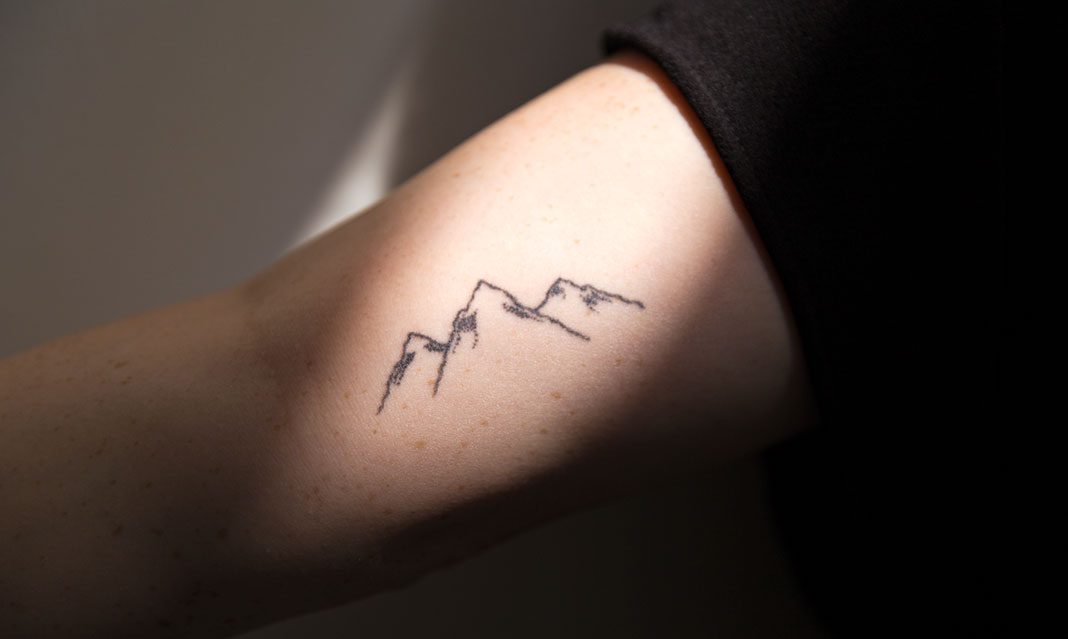 Karl Quimson: I got this tattoo during a time when I had a massive creative block. I decided one day that I needed to escape the city. I bought a last-minute train ticket to Montreal. All I had was $500 in my wallet at the time.

Once I arrived, I decided to go drinking on the first night, because I didn’t have a place to stay. When I walked into this bar called The Crowbar, I saw this guy with a massive beard and no hair on his head. I went up to him, and we started talking and began drinking. The man went by Oz. I told him more about myself. As we got deeper into conversation, I told him that my roommates and I had this silly joke, and used to call girls “birds.” For some reason, that idea stuck with him.

We started doodling birds on a napkin. He drew an owl and that seemed to stick, since we both liked the idea of wisdom, renewal and rebirth. He began to draw an owl through the lens of a kaleidoscope. It was pretty distorted. The more he drew, the more it ended up looking like a mandala. I liked the spiritual idea behind the mandala.

The next morning, I visited him at his tattoo shop and thanked him for the talk the night before. He had kept the napkin, and based the tattoo off the image we thought of together. We only had four hours, which is why it’s unfinished. I spent the $500 on the tattoo. Sure, it took all my money. But I realized I didn’t need cash to survive here.

Oz told me about a friend of his staying at a hostel, so that’s where I stayed. I had to get on with my journey, so Oz and I had to go our separate ways. He gave me a few pointers on hitchhiking, and it helped, since I wanted to hitchhike across the province. I never saw him again because he got deported back to Australia. I hope to finish [the tattoo] one day, and find a yellow brick road that leads me back to Oz. Erin Foley: This is my most recent tattoo. I got this tattoo in the beginning of August, at a place called The OkeyDoke. This tattoo is my most significant one in a series of really dumb tattoo choices. It’s a blue heron. I just let my tattoo artist freestyle, because I love her style of doing things.

In my core group of friends, they call me “heron.” Despite the fact that the name within itself is kind of silly and annoying, this is a group of people that helped me through one of the most difficult times of my life. There was a lot of change happening. There was a lot of transition. I don’t think I could have gotten through it without their support, even if that meant I had to deal with a few really stupid heron jokes. This group of people [has] established a home base for me. People I consider my home base definitely refer to me as “heron”. As such, this is my tribute to them and to those relationships that really transcended what I thought friendship was, and what a concept of a home was, and shifted that for me.

This is my tribute to my new home and to finding serenity through these beautiful relationships that I am lucky to have in my corner. Rhenice Bowman: My tattoo journey started at the early age of seven. My older brother came home one Thursday night with two tattoos, one on each arm. On his left forearm in a cursive font was my name, and on his right forearm in matching font was my sister’s name. From this moment, I became obsessed with ink and started planning my future tattoos, each one being extremely personal and usually connected to my family.

One Sunday afternoon, it hit me. I ran to my sister’s house, crashed on her bed, and said, “Tell me you love me.” Without question, she said, “I love you unconditionally”, as I simultaneously hit the record button on my laptop. I then repeated it again with my voice for her identical tattoo. After a week of imaging, enhancing, rendering, and colour editing, I had two perfect sound waves. We placed them on the rear side of opposite ribs: mine on the left and my sister’s on the right, matching our dominant hands. After completing the tattoos and coming together to take a picture, we realized that when we stand side by side, the two waves connect, creating a longer phrase. We love these images. They represent our family, our passion, and our love for each other. Adelaide Attard: The first out of my two tattoos is a little triangle on my outer left ankle. I got this when I was 17, the day before prom. I wanted my first tattoo to be really versatile. I think what scares a lot of people about tattoos is the idea of permanency and the fear of commitment. That’s what I thought. This was going to be on my body forever, and at such a young age, I didn’t want this tattoo to be too specific to who I was and what I was going through at the time.

For me, the triangle perfectly illuminates my love for the number three. The triangle symbolizes my mother, my father, and my sister: the three most important people in my life. And no matter what I am going through, I will always have a reminder of a trinity of my own. I also love how small it is. I love the idea of minimalism. I wanted to keep it simple and let the idea behind the tattoo speak for itself.

For my second tattoo, I have three mountain peaks on my right inner arm.

In 2015, I travelled alone to the West Coast twice. Both times I needed a release. Since I was visiting Vancouver, the home of a tattoo artist I stumbled across on social media, I wanted to have the tattoo done by her. Since she’s lived in Vancouver her whole life, I knew this would not be her first time drawing mountains.

I got this tattoo for three reasons. Like I said, I love the rule of three. Secondly, there is a quote by one of my favourite authors, Jack Kerouac: “Because in the end, you won’t remember the time you spent working in the office or mowing your lawn. Climb that goddamn mountain.” For me, this is a constant reminder not to become caught up in the tedious tasks of daily life and to never let go of my love for nature. Sticking with the literary theme, I loved the last page of Oh, the Places You’ll Go by Dr. Seuss. The page reads: “You’re off to great places, today is your day. Your mountain is waiting, so get on your way.” This tattoo is a constant reminder to get the most out of life, no matter what I’m going through—a reminder to always climb my own mountains, suspending any fear that may hold me back.

Nick Barnes, a resident of Mississauga, displays the true meaning of infinite love between siblings. On the right side of Barnes’ chest in a bold font is a phrase we all know, “Only the strong survive,” with the letter “O” made by the loop of the cancer ribbon. In 2013, Barnes’ older sister, Tamika Sutherland Barnes, passed away after almost three years of being diagnosed with stage IIIB lung cancer. Tamika, 28, was a triplet. Being only 18 years old at the time, Nick had difficulty dealing with the situation. He found strength through the unique bond he shares with his siblings. Nick got his tattoo after Tamika had been diagnosed. Symbolically, she was the only one who knew about it. His other siblings found out months after, and his mom found out a year after. After talking about the idea with Tamika, he wanted her to see it before she passed.

“She was my best friend. To this day, I’m not at ease with it,” Nick says.

Although the tattoo was not an impulsive decision, Nick states that he regrets the way it looks and there are many things that he would change. “I feel like now it doesn’t make sense because she did pass away, so I’d want to get it covered and redone. I feel like the meaning is lost,” says Nick. “I’d do something with an angel and her walking up the stairs to heaven, maybe [with] me at the bottom. I feel like it would help me let go.” However, Nick in no way regrets getting the tattoo for his sister. At the time, it was a symbol of her fight and the strength of his family unit.

While many people proclaim their interest in music, how many can say they love music? From Kings of Leon to Frightened Rabbit, Connor Hallyburton has expressed his passion for music through his tattoos devoted to his favorite bands.

The first tattoo depicts a desert setting, inspired by “Cold Desert” by Kings of Leon. Having been a fan of the band since he was young, Hallyburton often felt the song resonating in his mind —and so, the tattoo was born. Frightened Rabbit became the source of inspiration for his wrist tattoos, which display a boat and hand pointing upwards.

The inspiration spreads to his anchor-and-wheel tattoo, partly a result of his mother, Donna, and “Right Away, Great Captain!”, the side project of Andy Hull, the lead singer of Manchester Orchestra.

Hallyburton’s grandfather, James, serves as the inspiration for the family crest tattooed on his arm.

I’ve mentioned Hallyburton’s passion for music and his love for his family, but I might have failed to mention his interest in Grim Reaper skeletons. Diverging from the sentimentality of his previous tattoos, Connor found inspiration for this tattoo from a skeleton drawing I once made for him—bringing his tattoo count up to six.