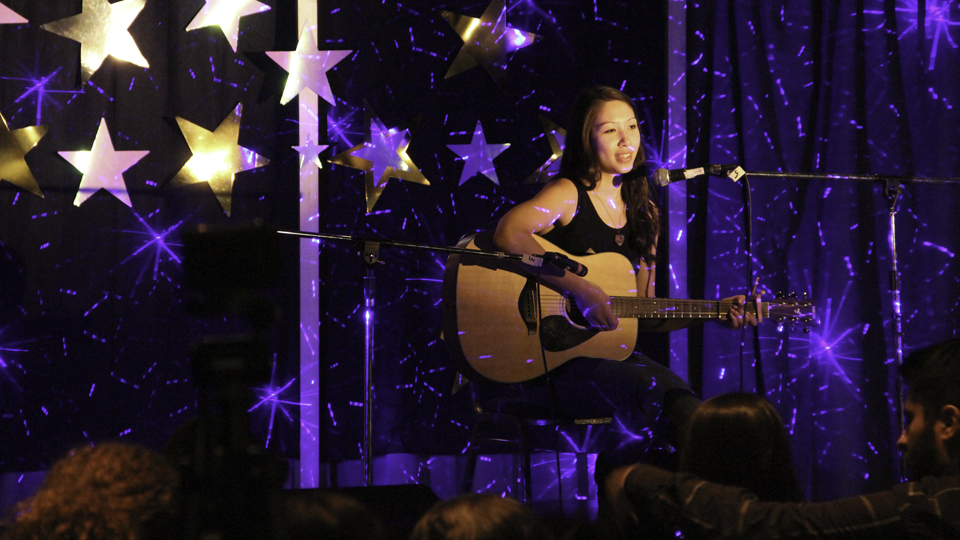 The Blind Duck was packed last Thursday night as the contestants and audience waited for the fifth annual UTM’s Got Talent competition to begin. The doors opened at 6 p.m., and excited students quickly filtered in to await the arriving finalists and the start of performances. On a stage decorated with balloons, stars, and strobe lights, hosts and UTMSU executives Francesco Otello-DeLuca and Emile Sabga opened a night filled with impressive talent.

Fourth-year student Natalie kicked off the night with a beautiful rendition of Ed Sheeran’s hit “Give Me Love” accompanied on guitar. The talented singer included the audience in the final chorus, providing an excellent introduction to the evening of music and dancing.

A variety of talents were on display: second-year student Karim’s rap of “I Wish I Was Me”; accounting specialist Alice’s exciting medley of tap, ballet, highland, Latin, and hip-hop dance to songs like Lou Bega’s “Mambo #5” and “Power” by Will.I.Am.; Sean’s “All by Myself” on the alto saxophone (just in time for Valentine’s Day); and “cool sound specialist” Jason’s vibrant, ambient stylings on the electric keyboard. The performances were exciting and vastly varied. The audience even joined in with Manmeet’s Punjabi “UTM” song.

At intermission, students swarmed the Blind Duck’s bar for pizza, cake, and pop provided by UTMSU while the hosts and judges prepared for the second half of the evening. Prizes were awarded to winning ticket-holders, including Square One Shopping Centre gift cards, Raptors tickets, and iPod Nanos, and UTMSU VP part-time Grace Slobodian and VP part-time affairs Hassan Havili surprised the audience with a song. While every performance was handpicked for the competition, some truly stood out. The third-place prize of a $100 Square One gift card went to Rhythm, a UTM dance troupe and winner of 2013’s UTM’s Got Talent, for their carefully choreographed dance of “Colours of the Wind”. They were adorned with colourful costumes and dramatic face paint. The group experiments with various dance styles to create a style they call “artistic fusion”.

The a cappella group Diversity, comprising Matthew, Victor, and Monarie, won the second-place prize of a $200 Square One gift certificate for their intricate and perfectly timed rendition of Lady Gaga and Beyoncé’s “Telephone”. The group performed their song in parts, and the performance was so good that the audience cheered on their feet while Diversity shared a group hug.

First-place went to Angeline, who sang Rihanna and Mikky Ekko’s “Stay” and transitioned into Adele’s “Someone Like You”. Angeline won a trip to Montreal for Reading Week and had the crowd shouting for an encore. She obliged.

As the night came to a close, the crowd left the pub, lingering to congratulate the winners and the competitors, catch up with friends in the audience, and grab the remaining food.

“My favourite performance of the night was Angeline, because she was super cute and extremely talented. She blew me away,” said fourth-year art and art history student Victoria Valle. “All of the performances were awesome. It was really cool to see so many talented people perform. You don’t get to see that every day.”