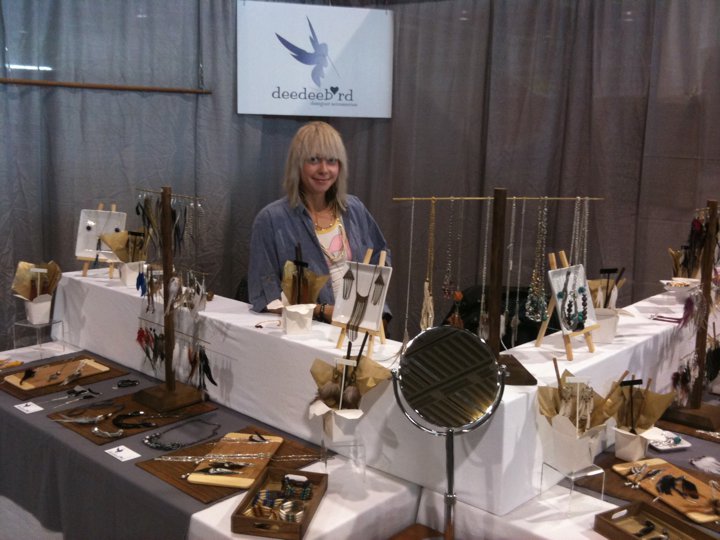 If you crave originality, artistic freedom, and unique pieces to complement your style, then you do not want to miss Toronto’s upcoming Spring 2011 Clothing Show.

A shopping fanatic’s sanctuary, the Fall 2010 Clothing Show took place last weekend at the Better Living Centre. Being an avid Toronto shopper, yet on a student dime, I was determined to see if the slightly pricey admission of $10 would be worth my while. The Clothing Show has been running for over 30 years, and though it was once a thrifty bargain spot, my friend worried me that I would now be looking at trendy boutique prices.

Dee Osborne, creator of deedeebirdDesigns (a very awesome feather and reclaimed leather jewellery accessory line), has been attending the show for six years and says that “The Clothing Show has a lot of volume, which is great for independent designers, but it has a bargain shopping stigma.”

The show consists of original pieces from local designers, as well as a large section of vintage wear, both for male and female.

“The show used to be primarily known for its vintage,” says Osborne, while setting up her feathery booth as the shoppers pile in. “Now it has cut its vintage back significantly.”

While the vintage style still holds a corner in the Better Living Centre, the independent designers are piling up. While designers are primarily from Toronto, there are a range of Canadian vendors, anywhere from bohemian Montréal to laid-back Vancouver.

If you’re interested in design, and like to create handmade things like bracelets or even intricate corsets, consider becoming a vendor for the Spring 2011 Clothing Show. The show accepts any designer, no portfolio required, with a fee for your booth space.

Or if you prefer to wear the work of an artist, get a ticket and make your way down to the Better Living Centre, in spring 2011. Oh, and bring cash, because the lineup at the ATM is enough to deter anyone from getting their shopping fix.

Check out www.theclothingshow.com for more information. You can find Dee Osborne’s company at www.etsy.com/shop/deedeebirdDesigns.