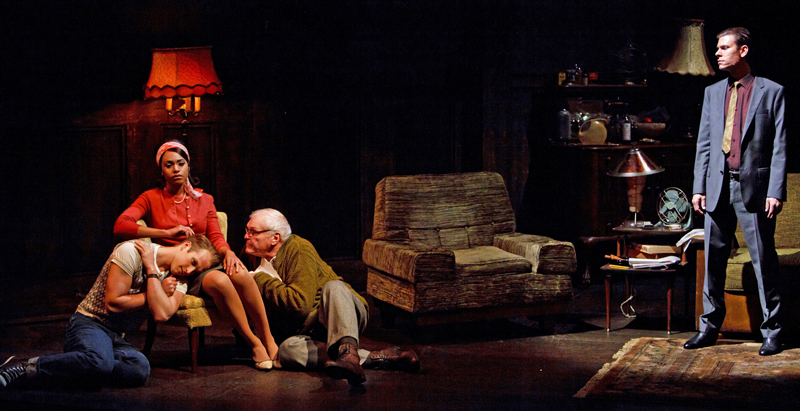 In terms of cultural attractions in Canada, nothing is much more prestigious than the Stratford Festival. Held annually in scenic Stratford, Ontario, it’s the most well-known theatre festival in Canada.

Mixing traditional Shakespearean theatre with more modern fare, the festival always manages to bring in the top level of stage actors. Christopher Plummer starred in the festival’s production of The Tempest last year, and this year the Stratford Festival offers several Canadian and international acting heavyweights to the lineup.

Over the course of a weekend, I had the fortune to take in two very different plays at Stratford. The first was Camelot, the well-known stage musical based on the story of King Arthur and the Knights of the Round Table.

Full of lighthearted musical numbers and melodramatic ballads, it’s likely to leave you humming songs such as “Camelot” and “Fie on Goodness!” long after the actors take their final bows.

Held at the impressive and aptly named Festival Theatre (the newer of Stratford’s two venues), Camelot is performed “in the round” (i.e., the stage is semicircular and allows seating from many angles). This allows the audience to feel more immersed in the action on stage, and director Gary Griffin makes good use of the 180-degree audience view. The main feature of the set is a large tree set on a circular track. The tree doesn’t move often, but when it does, it’s impressive to see King Arthur circling the stage up in his perch. The actors also move (and often dance) around the stage frequently, so any seat in the house has a good view.

The love-triangle plot of Camelot is a familiar one, and it becomes the actors’ job to come up with a fresh take on characters that the audience knows so well.

Leading man Geraint Wyn Davies made for a King Arthur full of pathos, and Kaylee Harwood brought plenty of humour to the stage as the hillariously self-absorbed Guinevere. But it was Canadian stage veteran Brent Carver who stole the show, playing both Merlyn and King Pellinore. Carver has over 30 movie and television credits to his name, and he won the Best Actor Tony award in 1993 for his role in Kiss of the Spider Woman. Here, Carver plays the doddering old king; every time he wandered onto the stage, he added an extra spark to the performance. Mike Nadajewski was also a standout and received good-natured boos from the audience during the curtain call for his villainous turn as Mordred.

Camelot offers a fun, beautifully costumed take on a traditional story, but if you’re looking for something a little less accessible, try Harold Pinter’s The Homecoming. It will certainly leave you with a lot to think about.

Staged at the Avon Theatre, The Homecoming is set in post-WWII England and it tells the story of a highly dysfunctional family. When the eldest of three sons, Teddy, comes back to visit his father and brothers after six years, he brings his wife, whom the rest of the family doesn’t know exists. Needless to say, things don’t go smoothly when a woman is introduced into a household of backwards, intensely sheltered men. The play is often darkly funny and isn’t afraid to push boundaries, and it takes an unexpected descent into even stranger territory during its second act.

Luckily, The Homecoming has some top-notch actors to back up its cast of uniformly unlikeable characters. Not the least of them is Brian Dennehy, who plays the family patriarch, Max. Dennehy has appeared in dozens of movies, including The Next Three Days, Romeo + Juliet, Tommy Boy, and this past weekend’s new release, The Big Year. He has also won two Tony Awards for his performances in Death of a Salesman and Long Day’s Journey into Night. Here, he plays a verbally abusive old coot whose behaviour becomes increasingly bizarre as the play progresses. His performance is simultaneously repulsive and spellbinding, culminating in a dramatic final scene that showcases what a truly fantastic actor Dennehy is.

Other standouts in the small cast include Ian Lake as the Brandoesque youngest son who has just as much insecurity as swagger, and Aaron Krohn, who plays the salacious middle son (and seems to have borrowed his accent from Russell Brand).

But while the acting may take centre stage in this psychological drama, it’s certainly not all that The Homecoming has to offer. The set design creates a very effective, grungy sense of atmosphere. The set is just a family room with stairs leading up to an unseen second level and a front door and windows, but what starts off as a nice but nondescript common room soon feels oppressive.

As we see some of what takes place in that room (and imagine what else could have happened in days gone by), the audience begins to hate it just as much as Max does.

It’s challenging to grasp what exactly Pinter was trying to say with The Homecoming, and it’s left open to interpretation, but it’s a fascinating play nonetheless.

The Stratford Festival runs until October 30 (with additional shows for the sold-out Jesus Christ Superstar continuing for one week after that). Online tickets are available for a newly reduced price for the rest of the festival’s run. Visit stratfordfestival.ca for more details.