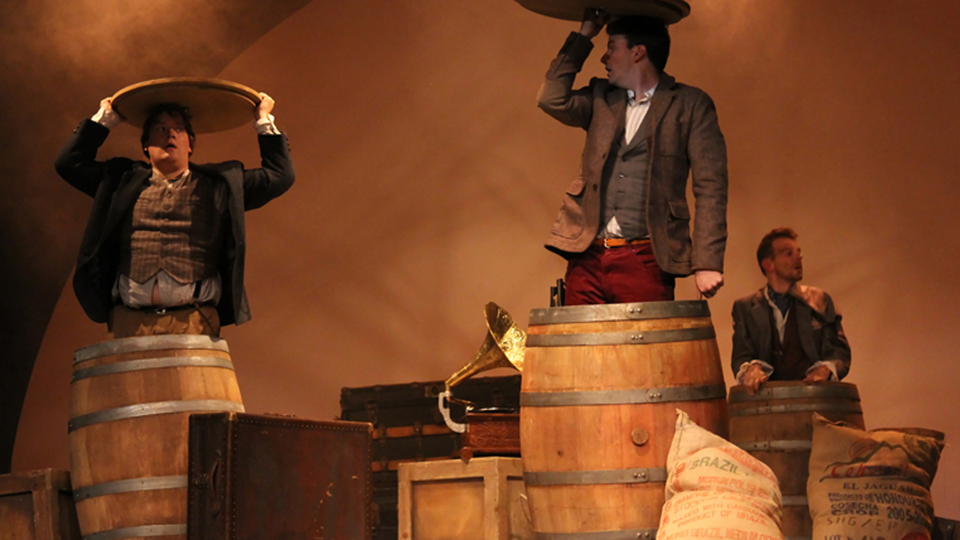 Hart House is kicking off its 2012/13 theatre season with a contemporary, existentialist spinoff of Hamlet. Written by Thomas Stoppard, Rosencrantz and Guildenstern Are Dead tells the background stories of Prince Hamlet’s doomed childhood friends, who are minor characters in Shakespeare’s original.

The three-act play takes the audience through Rosencrantz and Guildenstern’s philosophical journey. As fond friends of the prince, they are summoned to alleviate his apparent madness. The protagonists struggle with how to help their friend, but their troubles seem to evaporate when they are paid to escort Hamlet to England for a meeting with the king of England. Along the way, they discover their mission is actually a death sentence for Hamlet—a twist that throws the already imbalanced and bewildered duo into an even greater upheaval.

The play begins with a game of heads or tails. Guildenstern (Andrew Knowlton) tosses coins to Rosencrantz (Jim Armstrong), but much to Guildenstern’s agony, 80-something out of 80-something times the toss has resulted in heads. The two contemplate the authenticity of the laws of probability while trying to determine what landed them in this situation to begin with.

And so the protagonists continue their journey dazed and confused, wondering which way they are going, what the first thing they can remember is, and what to do with their doomed friend Hamlet.

Armstrong and Knowlton impressively portray their characters as distinct individuals, something the characters themselves are unable to be. Armstrong gives a convincing portrayal of the less bright member of the duo. His clumsy stumbling about the stage and forlorn gazing up at nothing, his consistent desire to please his better half, and his repetitive questions all embody what sets Rosencrantz slightly apart from Guildenstern.

Similarly, Knowlton convincingly plays on Guildenstern’s unique traits. He’s bossy and quicker on his feet than Rosencrantz, often taking control of the stage. At the same time, he’s a victim of violent mood swings that lead to hilarity. At one point, Guildenstern snatches a travelling actor’s knife from his pocket and stabs him in the neck, only to find that the weapon is a prop.

But while their personalities shine beautifully thanks to the actors’ attention to detail, the fact is that Rosencrantz and Guildenstern are really just two halves of one character. It seems like no one in the play can distinguish one from the other. One never appears without the other on stage (until their separate exits at the end). When Rosencrantz is in the middle of a neurotic rant, Guildenstern is there to calm him down. When Guildenstern is begging the acting troupe to stay, Rosencrantz is off at the side, minding his own business. In this way, the pair maintain a strange balance of their paranoia and existentialist philosophical reasoning.

The production is simple and gives the audience ample opportunity to focus on the acting. Besides a raised area of the stage and the occasional prop, the stage was left open for the actors to roam with freedom. The lighting was beautifully orchestrated; slides were put over the lights to produce elegant silhouette backdrops. One moment Rosencrantz and Guildenstern were staged in a forest, the next moment they were being presented to the king at court—all through the lighting.

I highly recommend Rosencrantz and Guildenstern Are Dead, but it’s not for the fainthearted. The dialogue is quick, wordy, and unquestionably ridiculous—the absurdist, confused nature of both protagonists is sometimes hilarious, sometimes frustrating to try to understand.

But this frustration and confusion are the heart of the play. As the director, Matthew Gorman, puts it, “Stoppard gives us nothing but words, words, and more words. He is an exhausting writer to read, let alone to try and live.”

Rosencrantz and Guildenstern Are Dead is running for another two weeks at Hart House Theatre.