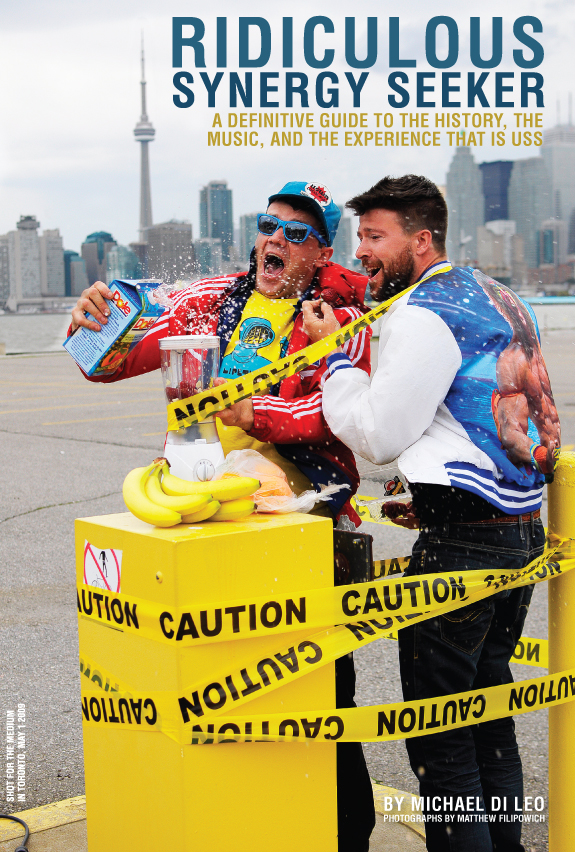 Ash Buchholz and Jason Parsons arent afraid to admit that they tend to be overly-energetic.
You know what would be really challenging for me? asks Buckholz. To be in a room of ice skyscrapers — you know, skyscrapers made of ice, like models — and try to have a conversation surrounded by them. I would not move, adds Parsons, yeah, it would be like SHHH [makes glass-crashing sound].

This doesnt come as a surprise to anyone who has seen these two play live. Under the moniker Ubiquitous Synergy Seeker (which, as Parsons explains, is more of a feeling than a label), or USS for short, the duo possess more spirit and drive than most bands would like to admit to. Perhaps it is a faction of the kind of music they play — a rhythmic mélange of electronic, rock and reggae, courtesy of Parsons DJing and Buchholzs impassioned guitar playing — which inevitably leads to their charged performances, or, more likely, it is caused by their larger-than-life personalities.

Case in point: the Canadian Music Week Indie Awards, March 14 2009. As one of the guests performing at the event, USS took every liberty in making sure no one would forget their set. Amid pulsating smoothies, a stage littered in caution tape, and life-size cardboard cutouts of Barack Obama and Albert Einstein, USS delivered a performance that was unparalleled in its high-energy/high-entertainment value, and remains one of the most ridiculous (in the best way) sets ever witnessed. A big part of the concept [of our performances] is obviously energy, but also neo-vaudevillian — because you can do whatever you want, it doesnt matter, and be crazy, and try to pump up the crowd. Weve been to enough shows to learn the craft and know how to do it best based on the style of songs we play and how we perform them, explains Parsons (stage name: Human Kebab ).

Buckholz agrees, but takes the explanation one step further. Were both absurdly inspired by athletics, both having come from an athletic background, and, like that, it took a lot of persistence and a lot of discipline to get where we are.

That same athletic background paved the way for the groups formation. Originally called Team of Captains, Buchholz and Parsons derived their name from the fact that something ridiculous like 22 out of 25 players on the Canadian Junior team that year were assistant or team captains.

Team of Captains, as Buchholz explains, was a blessing in disguise. There was an absolute destiny involved… We kind of just smashed into each other. It was like primal ice cream, adds Parsons. Yeah.

Buchholz and Parsons originally met while working at the same golf course, and the two hit it off immediately after becoming aware of each others musicality. After Buchholz suggested to his sister that Parsons be the DJ at her wedding, the two began experimenting musically.

A funny story of what drew us closer is when I was at Jakes on Main Street in Unionville one evening and I saw [Buchholz] across the patio, recalls Parsons. He recognized me and came over and hes like I feel like Ive known you for ten thousand years and he handed me a business card that was basically the Ontario health card but he made it look like OlDirty Bastards first album cover. Seminal album, by the way, chirps Buchholz.

And he sat down and gave me the card and said So I was in the library today and I figured out why asparagus makes your urine smell. That was his opening. Mercaptan, concludes Buchholz.

After a name and lineup change, USS was born. Buchholz and Parsons continued to experiment musically, mostly in the domains of mixing and what Buchholz refers to as garage rap, which eventually led to the sound for which they are well known for today. It seemed only natural then when USS decided to produce an EP that featured some of the material they had been working on — the very radio-friendly Welding the C:/ (pronounced C drive).

[Our proudest moment] was when our EP found its way into the hands of Barry Taylor at The Edge, says Parsons, referring to the EPs heavy rotation on the Toronto radio station. Things like that dont really happen anymore.

Buchholz is almost nostalgic. Its almost like raising a child, you know, it felt like we spent so much time just being good parents to this art that it raised itself, and is now just realizing how expensive cheese is at the grocery store.

Before making it big on the airwaves, Parsons and Buchholz worked just like the rest of us. I still flat roof occasionally, explains Parsons, but [Buchholz] cant because of his knee. Oddly enough, Parsons first caught wind of the success of Welding the C:/ and its lead-in single Hollowpoint Sniper Hyperbole while working on an oil pipeline in Alberta. But both agree that supporting themselves financially through their music and not having to roof during the winter remains one of the most vindicating experiences for them. With the success of their EP and the reputation it built them in such a short amount of time came offers for the duo to produce a full-length debut. Parsons and Buchholz fielded bids from several labels but decided instead to sign with Smashing World Records who, along with help from 102.1 The Edge and former Team of Captains bandmate Charles Topping, produced their debut album, Questamation, which came out in March of this year.

Our album isnt necessarily being projected at the part of your brain that understands rationale, explains Buchholz. Questamation is full of trademark USS two-step rhythms and frequent eclecticisms that will keep you on your toes, not to mention its high danceability factor. If you feel it you feel it, and you get it. If you dont you will probably hate it. It doesnt have to be right or wrong, but if the cog is ready for the right cog to fit and it fits, it definitely gives it a special quality.

Laces Out and Anti-Venom, the lead singles from Questamation, showcase the bands ability to create distinct pop tunes. By overlaying the strong beats with grungy guitars, various synths, and Buchholzs memorable melodies, USS manages not only to create a tightly-knit patchwork of genres, but one that has universal appeal. On any given night you will hear USS blasting from Queen West nightclubs, to rock radio stations, to white-collar corporate parties, to low-riders stereos. The common denominator: everyone can move to USS.

Which is why in May, when USS played a packed show at the Sound Academy in Toronto, it was difficult to tell what demographic the band was aiming at. There were the obvious twenty-something-year-old concert whores and the less cool, forty-something-year-old midlife-crisis-ers, but there were also preteens, highschoolers, cheerleader troupes, b-boys, football players, contest winners, and old guys. No other circumstance would bring these people together.

Like their show at the Indie Awards two months prior, Buchholz and Parsons were up to their usual tricks — mainly smoothie-blending and handstand-record-scratching — but there was a different feel this time around, a maturity, almost.

It was as if they had since realized how lucky they were, surrounded by their overwhelmingly wide range of fans, playing the music that had got them so far and given them so much.

Now the attitude is that if it ends tonight, lets just high five and go to the library tomorrow.

Go behind the scenes of The Medium’s exclusive USS photoshoot. Photographs and art direction by Matthew Filipowich