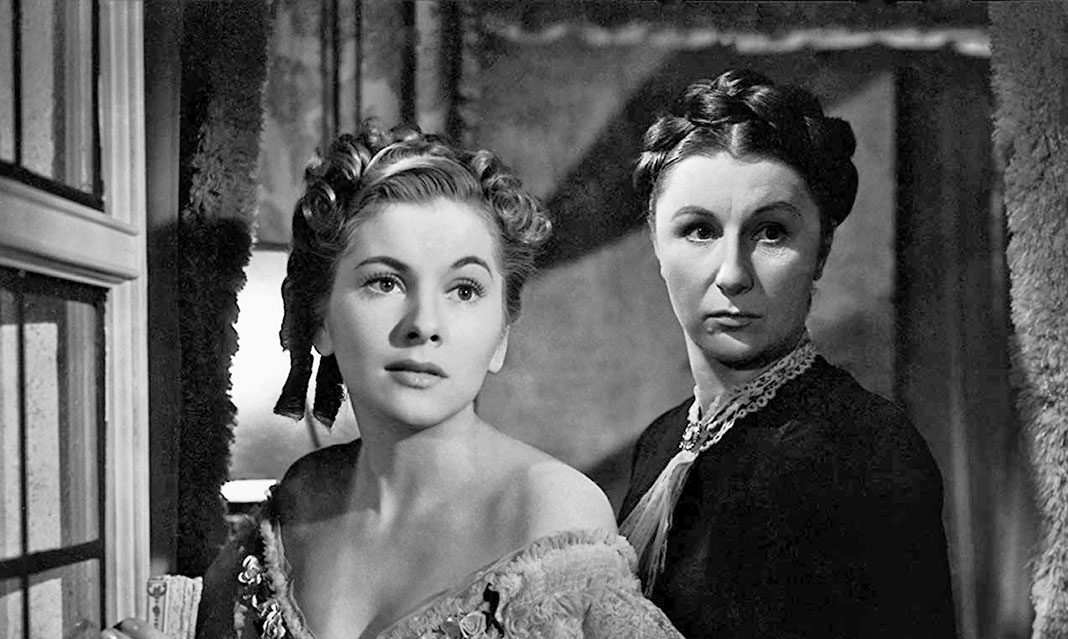 “Last night I dreamt I went to Manderley again…”

Closely adapted from Daphne du Maurier’s seminal classic of the same name, the story follows a young, unnamed protagonist (Joan Fontaine) as she falls for Maxim de Winter (Laurence Olivier), a dashing widow who harbours a murky past.

In the first scene, Maxim stands on a cliff edge, staring down at the raucous sea below. Thick waves thrash against jagged rocks. Harsh winds wrestle his pant legs. The camera zooms in. The piercing score intensifies. Maxim bows his head and lifts his foot and as he steps forward—a shout. He’s interrupted, saved, by our female protagonist.

Rebecca is a feminist film. Its themes of strong women saving the day subvert dominant gender norms and sociopolitical views of the time, in which women depend physically and emotionally on their male counterparts.

Perhaps even more subversive is the implied lesbianism between the late Rebecca and her surviving caretaker Mrs. Danvers (Judith Anderson). The caretaker keeps Rebecca’s bedroom spotless, every mirror and hairbrush in its exact place, every garment folded to perfection. In one scene, Mrs. Danvers caresses Rebecca’s “specially made” underwear against her cheek.

Sadly, the film isn’t entirely progressive. It depicts queer characters as vile and violent, perpetuating harmful baseless stereotypes. It depicts Mrs. de Winter as weak, unstable, and passive to the events surrounding her.

But when the first great twist unravels (and boy is it a big one), the protagonist breaks from feminine generalizations and morphs from a bumbling, neurotic housewife into her coherent, resilient self.

Aside from its subversive themes, Rebecca tells a chilling story.

The new Mrs. de Winter marries Maxim and moves into his infamous Manderley estate, where she soon realizes she doesn’t belong. She’s innocent, modest, and naïve to upper-class life. The late Rebecca was strong, noble, and “the most beautiful creature” ever seen.

It’s at Manderley where our protagonist meets Mrs. Danvers, a cold caretaker who casts menacing stares our way.

Mrs. Danvers wears all black, her slender figure piercing through the white empty corridors and the bright open spaces of Rebecca’s bedroom. She sports a thin, sheepish grin and a slithery voice. “Why don’t you?” she later whispers to a distraught Mrs. de Winter who teeters on the windowsill high above the concrete terrace below. Mrs. Danvers hates our protagonist and any threat to Rebecca’s everlasting image of perfection.

Elsewhere, shadowy cinematography compliments the foreboding score, imbuing an undeniable feeling that someone—or something—lurks just behind every corner. Narrowing shot compositions close us in a claustrophobic nightmare, a black hole where the door is always out of reach.

Rebecca isn’t in-your-face scary. There are no jump scares or stalkers in hockey masks. It’s also not quite a haunted house film. Doors don’t slam shut in the nighttime. Instead, the scares are subtle, creeping and crawling their ways around us and the characters.

We feel something is wrong but have no idea why.

Hitchcock wrenches you through the gamut of human emotion: happiness, sadness, surprise, and of course, suspense. All this culminates into the film’s final images that will sear themselves into our minds; images that, like Rebecca herself, never seem to leave us.

You never see actually Rebecca. Instead, you feel her presence breathe its way through the long empty corridors of Manderley, the crackling waves of the English Channel, and the momentary silences within the haunting score.

The contradictions between light and darkness, score and silence, close-ups and wide shots will unease you. You’ll dig your nails deep into your seat cushion. You’ll feel your toes tense up and coil together. But, like most Hitchcock masterpieces, you can’t look away.