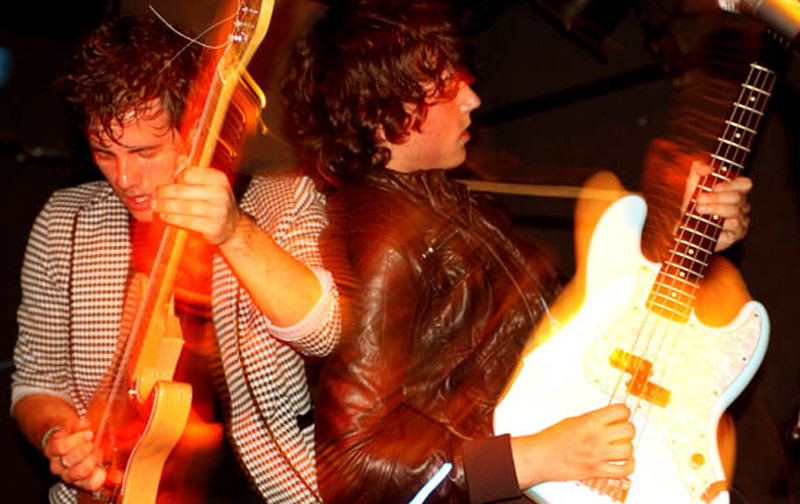 College Street is infamous for its endless strip of nightlife. It’s home to many hidden cracks where local live music can be shared with late-night crowds. Up the stairs of Mexican restaurant Rancho Relaxo is where the electronic party was held on a cold Friday night. It was good to hear that all bands to hit the stage were from Canada. Local talent is always a plus; it’s reviving to see that talent can still be found inside the city and outside of the television screen.

Rancho Relaxo was very inviting to music-lovers like myself. It was a tight-looking place, broken-down, but cozy. It was filled with a few jagged tables and chairs, cheap lights, a rugged dance floor, and a small stage. It was the ideal place for musicians to put on an intimate gig for a curious crowd. As people entered up the narrow stairs, I lost a quick $6 for a tiny black x on my hand, and began the night. Rancho Relaxo? Rancho Electro promised to be a night filled with electronic bands galore, and it was much anticipated. Around 10 p.m., the turnout gradually increased, and shortly after, the first band took the stage.

The band introduced themselves as R.A.P.E. Tazer. Their shocking choice of name matched their physical appearance perfectly, with the males flaunting crazy hair and oversized sunglasses. The initial first impression of their looks and name suggested that a fun time lay ahead. As the music began, it drew the audience closer, as they stood to their feet, preparing to explore some electronic sound. The female lead, Nancy Ferreira, surprisingly introduced her auto-tuned voice, adding to the dancey beats of chord-driven music. Every song was performed with Ferreira’s auto-tuned vocals, which inevitably started to sound monotonous. The band’s songs were compiled of Ke$ha-like lyrics, singing about getting drunk and parties. There was nothing in particular that has never been heard or seen before. Yet the music itself fit the genre for the night, and R.A.P.E. Tazer entertained their “loyal rapists” successfully.

Up next were Ottawa’s very original Paramedics. This experimental alternative/indie band was interestingly creative. Four simple-looking guys began their set, and right off the bat, the rush of electronic guitars and loud throbs reverberated in everyone’s eardrums. Songs such as “Witch Hunt” were loud and reckless, but carried out in an extremely passionate way. The mature and dedicated feel of the music performed was clear in Paramedics’ show. As for vocals, there were hardly any, other than the few words that echoed unclearly across the room. Yet the lack of lyrics was what made the band intriguing and distinctive. Paramedics were comparable to a harsher version of Toronto’s own Holy F*ck, with a rare addition of vocals. Overall, the band held the attention of the crowd throughout, with their unique and memorable take on electronic noise.

After two sets, the night was still young, and the crowd was longing for more. Next up was a band of five Irish friends who go by the name of Nightbox. With an instantly lively tune, it wasn’t long befor the pounding electronic rhythms lured shoes onto the dance floor. It was a hypnotizing sound that allowed a carefree body to sway to the beat. The band performed a total of eight tunes, filled with upbeat melodies, along with a strong lyrical performance by front man Jake Bitove. The energy presented onstage was positively overwhelming, with every band member maddeningly passionate. The energy emitted from the stage caused an adrenaline rush to people all around. The band was promised to be a talented treat, and so they were.

Nightbox has a promising future, and a big step towards success is  coming. Four songs out of the performed eight are to set be officially released on the band’s upcoming EP that will be released on iTunes worldwide on February 22. The EP was produced with the help of Canadian music icons Sebastian Grainger of Death from Above 1979 and Al-P of MSTRKRFT, and was recorded in MSTRKRFT and GIANT studios. With the music heard live on stage, I can only predict that the sound will be as good, if not better, on a disk.

So as the night grew grey, the little black x started to fade, and Nightbox left the stage. The ears of all the electronic fiends were pleased. But we all know that fiends must get their fix, and the next available dose is on March 5 at Wrongbar­, which marks the celebration of the release of the long-awaited EP.