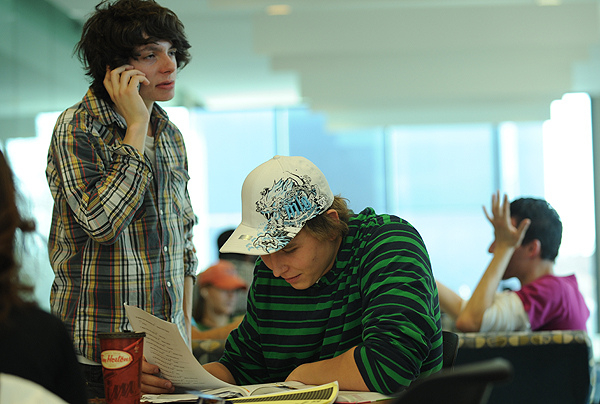 The UTM library can be a great place to hunker down for a couple of hours and get work done. Unfortunately, finding the required motivation and concentration to do so can be shockingly difficult. Who knew that tracking words across a page with your eyes could seem so impossible? With exams just a few weeks away, it’s important to be aware of the many possible distractions in the library that often seem to prevent student productivity.

1. The Comfortable Seating
Nothing invites brain inactivity like plush lounge chairs. If you’re lucky enough to snag one of the many arm chairs dispersed around the library, you’ll likely end up like one of those people you see curled up under their jacket, fast asleep. You may not feel tired when you sit down, but trust us: your head will soon begin to nod, your eyelids will droop and suddenly it’s an hour and a half later. Just don’t be surprised if you wake up to find yourself frowned at by those who can’t find a seat in the packed study areas.

2. The TV Screens
Though they are wisely not set up in the study areas, the large television screens hanging by the elevators and staircases are a great source of entertainment when you’re looking for distraction. You may not learn anything that’ll help you with your history test, but after a couple of minutes spent staring at the screen as it cycles through its informative headlines, you’ll know all the latest news and how to dress appropriately for the weather in the next five days.

3. iPods/Laptops/Cellphones
Technology, while convenient, is a source of never-ending distraction. The UTM library is no exception. Whether you’re checking your Facebook homepage for the fourteenth time in an hour or creating a new playlist of songs that will get you in the mindset for studying, you’ll likely spend more time tinkering with gadgets than anything else. And be careful not to choose the wrong studying soundtrack. The electronic blips and buzzes of Radiohead’s Kid A album always makes me drift off to sleep by the time the third song starts. Also, other people’s electronics can be a source of distraction. Between the bass emanating through their headphones and the cell phone that vibrates with a new text message every thirty seconds, electronics are a headache when it comes to study attempts.

4. Starbucks
The delicious aromas of their beverages are inescapable in the library and after 15 solid minutes of studying, you deserve a quick Starbucks run. Right?

5. Other People’s Conversations
Eavesdropping is rude. But curiosity tends to win when you must choose between writing a 2,000 word essay and listening to someone else’s tale about a particularly debauched weekend. You can try to justify it by telling yourself that the unsuspecting storyteller shouldn’t be talking so loudly in the library. But in the end, voyeurism is one more thing that stops the creative juices in their tracks.

6. The Outside World
Nothing is worse than being trapped inside on a sunny day, so when you’re sitting in a chair by the window, it’s impossible not to let your eyes wander to the outside world. In elementary school, there was always a teacher around to helpfully draw the curtains closed if too many wistful students started daydreaming and staring out the window. Now, it’s up to you to exercise self-control, and bored university students are not known for possessing that skill. Whether it’s wildlife spotting or watching the construction cranes sway hypnotically, there’s always something going on outside that seems exciting by comparison.

All that having been said, hopefully you’ll be able to avoid the pitfalls of procrastination and put your time in the library to good use. If not, there will always be something else there to keep you entertained.