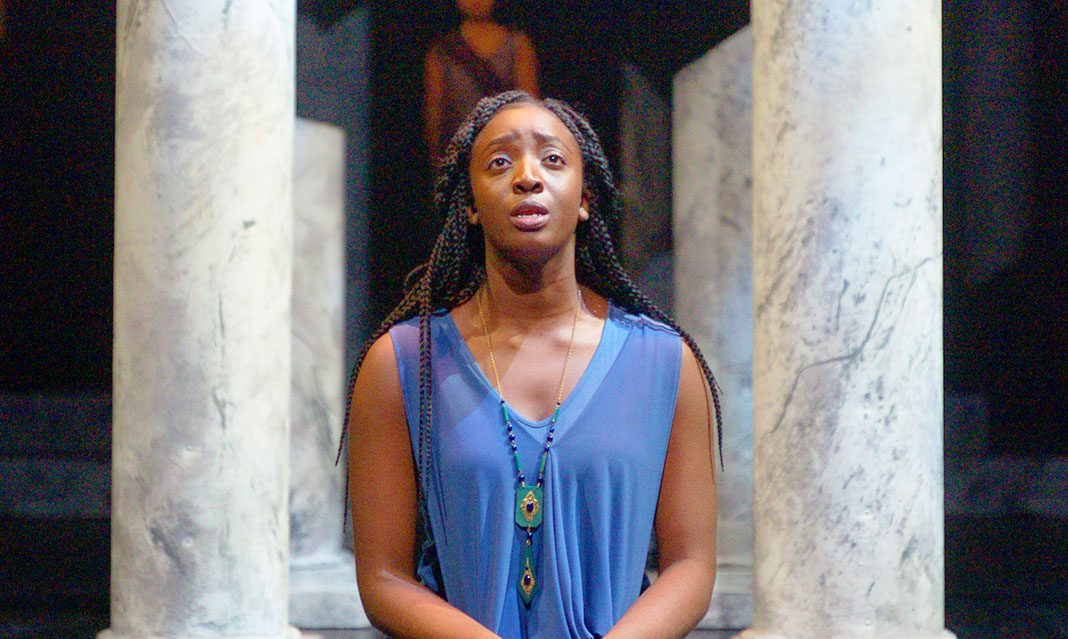 William Shakespeare’s classic tragedy, Julius Caesar, was reworked into a women-centered lens by Kaitlyn Riordan, which she titled Portia’s Julius Caesar. The play follows Shakespeare’s traditional story but alters the original for a feminist audience.

Hart House Theatre’s production of Portia’s Julius Caesar is directed by Eva Barrie and features an 18-person cast. The play tells the story of Julius Caesar’s (Yusuf Zine) tragedy as a Roman dictator, through the perspective of his wife Calpurnia (Whitney K. Ampadu), her friend Portia (Athena Kaitlin Trinh), and her husband Marcus Brutus (Felix Beauchamp).

Riordan’s adaptation of Julius Caesar showcased a feminist perspective on secondary female characters. These characters are typically viewed as insignificant to the male-dominated plot. As a result, she introduces a new character, Servilia (Alexandra Milne). She is Brutus’s mother and does not have a healthy relationship with her daughter-in-law.

The play immediately opened with the Soothsayer (JD Leslie) breaking the fourth wall. She wore a dark green cloak that covered the sides of her face and she entered from the back of the theatre, declaring a monologue as she sauntered toward the stage.

Later in the play, Brutus and Mark Antony (Hardi Zala) plan to murder Caesar, in the name of Rome, to end his democratic rule. After Caesar dies, Brutus makes a speech to the Romans, defending his actions. The common people were easy to manipulate, first angry at Caesar’s murderers, but later understanding, then again angry at Brutus. Ultimately, they wreaked havoc against Brutus, his family, and Rome.

Servilia exiled Brutus and his child for safety, however, she does not disclose their whereabouts to Portia. On their trip to safety, a mob riots into the carriage, killing all passengers, including the infant. Portia is so heartbroken over the loss of her child and husband she later commits suicide. The play closes with Calpurnia paying tribute to Portia’s life. This moment contrasts with Shakespeare’s ending in which Antony pays tribute to Brutus as his death was brought upon suicide too.

Trinh’s performance as Portia was dynamic. She portrayed Portia in a new light, fighting gender stereotypes and advocating for feminism through her actions and words. Trinh held a strong connection with Portia’s emotions, showcasing the character brilliantly.

Zine’s performance as Caesar was powerful. His voice roared throughout the theatre, which demonstrated Caesar’s authority and confidence. He brought his character to life with his stage presence and talent.

An interesting concept which was embedded into Portia’s Julius Caesar was the normalization of breast-feeding. Throughout the play, Portia is carrying her newborn infant against her chest, using a cloth sling. One scene, she talks with Brutus and casually cups her hand into her dress to feed her child, while continuing her conversation. This action is nonchalant; Brutus makes no comment about sexualizing her maneuver or body. I was amazed with the ability to normalize a human bodily function, which receives criticism in the twenty-first century, into a historic play. Also, during one of Portia’s soliloquys, she is breastfeeding as she speaks. This further normalizes breastfeeding, which is interesting to note.

Personally, I found Portia’s Julius Caesar a little hard to follow. I am not fluent in Shakespearean language, so the dialogue was difficult to understand immediately. Although I did understand the general plot, I was confused during other scenes.

The unique aspect about this production was their ability to break the fourth wall. The play makes use of the entire theatre space for the set. There were moments when characters interacted with the audience. For instance, when Caesar was making his entrance into town, he walked on the ground below the stage, waving, and shaking hands of audience members in the front row. By breaking the fourth wall, the production establishes engagement and interaction with the audience.

The chorus played a big part in this production. During some scenes, they would spread themselves across the theatre grounds, standing around the chairs of audience members, shouting their lines. The placement of the cast circling around the theatre made the production more engaging.

If you’re a Shakespeare enthusiast and interested in watching a feminist take of Julius Caesar, check out Portia’s Julius Caesar, running until November 30.