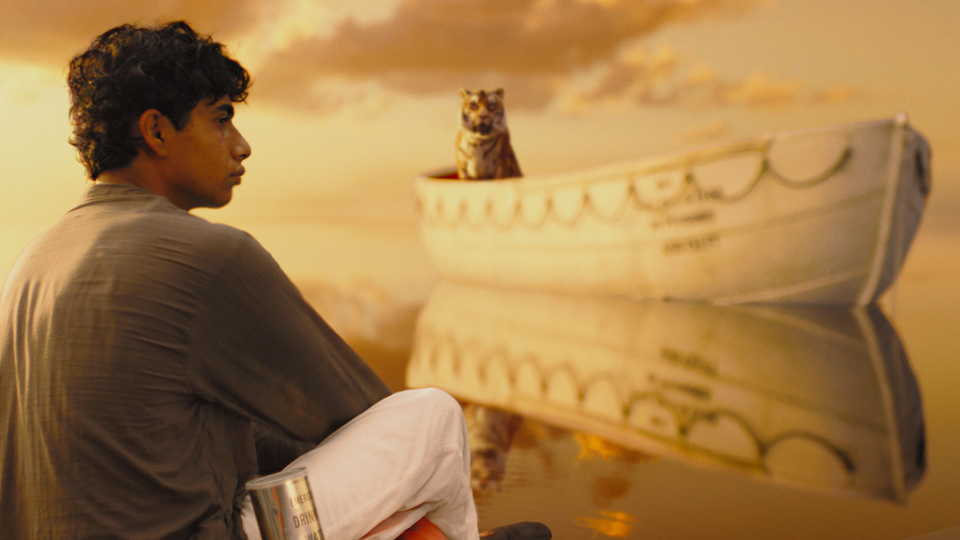 As one of many who’ve read and been captivated by Yann Martel’s 2001 novel Life of Pi, I was ecstatic when I saw the trailer for the movie.

The book, widely considered to be “unfilmable”, was published in 2001; over a decade later, it has finally met its cinematic match. Directed by the Oscar-winning Ang Lee—who also made Brokeback Mountain, Hulk, and Crouching Tiger, Hidden Dragon—Life of Pi is the story of a 16-year-old boy who ends up stranded, floating through the Pacific on a lifeboat with a tiger.

The film features veteran actors Irrfan Khan (who had minor roles in The Amazing Spider-Man and Slumdog Millionaire) and Rafe Spall (Prometheus and Anonymous) alongside Suraj Sarma, who stars in his first film role as the hearty and spiritual protagonist, Pi Patel.

Pi’s story begins with a mesmerizing opening credits scene. A tranquil Indian melody paired with artistic shots of lively exotic animals creates a paradisiacal atmosphere that lends its colours to the rest of the film.

In brief present-day segments, an adult Pi tells his story to a curious writer, beginning with the origin of his peculiar name. We see Pi as a child raised in Pondicherry, India, where his father owns a magnificent zoo in the local botanical gardens. As Pi grows, he develops a fascination with religion after being dared by his brother to enter a Christian church. Eventually, he practises three religions (Hinduism, Christianity, and Islam) simultaneously, much to the exasperation of his father, who tends to think scientifically. After taking stock of their growing financial problems, Pi’s family suddenly decides to sell their animals and move to Canada. Pi begrudgingly leaves his precious homeland as the family prepares to cross the Pacific in a second-rate freighter.

One night, Pi is awakened by a tremendous storm that floods the ship and releases half the zoo on deck. The crew force Pi into a lifejacket and shove him on a lifeboat, and Pi watches helplessly as he becomes the sole human survivor of the shipwreck. Sharing the lifeboat with him are an injured zebra, a hyena, an orangutan, and an adult Bengal tiger named Richard Parker.

The decision to film it in 3D shows that Lee knows how to make a piece of art out of a movie. For those who’ve read the book and feared facing boredom during the long lifeboat survival parts, where nearly all the dialogue is internal, lay your worries to rest. We’re dealing with a professional here. Ang Lee captures your attention in the first few seconds and doesn’t let go even after the ending credits. The visual effects are stunning. The mostly computer-generated animals look realistic (à la Planet of the Apes), and you really feel immersed in the chaos and terror during the storm scenes. Lee is an expert at building and breaking tension; he times each shot precisely to shock or amuse you at the perfect moments.

As if being stranded in the middle of the Pacific on a lifeboat with limited provisions isn’t hardship enough, throw in a ferocious 450-pound carnivore and you’re left contemplating your options: death by ocean or death by tiger. This isn’t just a pretty 3D flick. Pi’s physical and mental capacities are challenged beyond their limits in an extraordinary show of faith, risk-taking, and gratitude found in the unlikeliest of situations.

The relationship between Pi and the tiger is never predictable. Whenever they interacted, I found myself leaning forward, hypnotized by the imminent danger and uncertainty. The fact that a tiger is a wild animal is definitely emphasized. Like Pi, you don’t know how Richard Parker will react, so you are constantly vigilant. Richard Parker nearly steals the show in some scenes. Even as an animal, his personality can be identified with, and at one point it shares a lot with Pi’s own as they share their suffering.

Some parts were a little overacted, like during the storm, when Pi reacts to the animals attacking each other and when the crew members get washed overboard. Sarma sticks his arm out and melodramatically yells “NO!” This reaction is understandable the first time, but after he’s done it three times, you start to wonder why he didn’t try to do something instead of just watching and yelling uselessly.

Also, the brief attempt at a romance segment (which was emphasized in the trailer) was cute but relatively unnecessary. The on-screen interaction, which never appears in the book, lasts for about five minutes and the girl is never mentioned again.

The storytelling scene at the end is a bit of a visual letdown: after all this exposure to brilliant and bright scenery, Pi’s face fills the screen for what feels like a long time as he sits on a hospital bed and explains his debacle to a couple of inspectors.

But although the pace slows down considerably, the final message hits you like a mental time bomb. The entire story leads up to this simple and quick exchange between Pi and the writer, and if you don’t catch it, you almost miss the very point of the story.

Life of Pi is riveting in its plot, artistic in its imagery, and superb in its characterization. It’s an inspirational tale that leaves you with a little more faith than you had coming in. A real treat for the eyes and ears, this spiritual wonder is magical in its power to drag you in and totally absorb you. MMMM