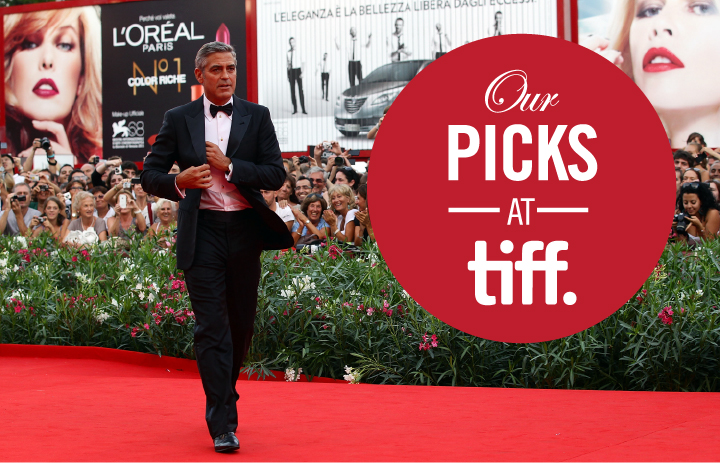 The Toronto international Film Festival seems to have been raising the bar every year, and this time around is no exception. With veterans like George Clooney and Brad Pitt as well as newcomers like Ryan Gosling and Seth Rogen gracing red carpets at this year’s festival, TIFF organizers went all out to bring the biggest stars and best film programming to eager audiences. Check out our preview of some of the festival’s most promising movies, and stay tuned for the verdict next week.

We Need to Talk About Kevin

A deviant child is every parent’s worst nightmare. Surely they won’t remain that way forever? We Need to Talk About Kevin paints a haunting portrait of a couple’s rocky relationship with their antisocial son as he fails to outgrow his abnormal behavioural patterns. The plot takes an especially chilling turn when their only child performs the unthinkable. Based on the best-selling novel by Lionel Shriver. Directed by Lynne Ramsay and starring Tilda Swinton (The Curious Case of Benjamin Button) and John C. Reilly (Brule’s Rules with Dr. Steve Brule). Premieres Friday, September 9, Winter Garden Theatre, 8 p.m. and Sunday, September 11, TIFF Bell Lightbox 2, 9:15 a.m.

Following the huge success of Goodnight and Good Luck as George Clooney’s directorial breakthrough, the veteran actor returns to TIFF with his latest film, The Ides of March. He joins Ryan Gosling (Blue Valentine) and Philipp Seymour Hoffman (Capote) in a thriller that emphasizes the media’s overwhelming influence on politics. Gosling also stars in Drive and Seymour Hoffman in Moneyball, both of which are premiering at TIFF as well. Premieres Friday, September 9, Roy Thomson Hall, 9:30 p.m. and Saturday, September 10, Visa Screening Room (Elgin), 11 a.m.

There are countless remakes of classic Shakespearean plays, but few about the man himself, and even fewer that attempt to expose him as a fraud. Was Shakespeare really as gifted and legendary as everyone thinks, or was he just a notorious charlatan who ripped off the work of others? With a political twist in the court of Elizabeth I, Roland Emmerich’s thriller Anonymous poses these questions in an attempt to unhinge contemporary society’s acceptance of the Bard as the greatest writer of all time—one who may not have even existed. Stars Rhys Ifans (The Informers), Vanessa Redgrave (Atonement), and David Thewlis (Harry Potter series). Premieres Sunday, September 11, Visa Screening Room (Elgin), 9 p.m.; Monday, September 12, Winter Garden Theatre, 4:30 p.m.; and Saturday, September 17, Scotia- bank Theatre 2, 11:45 a.m.

In all her regal poise, Rachel Weisz (The Whistleblower) stars as the wife of an influential court official who would never think of leaving him… that is, until a hot, young ex-fighter pilot walks into her life and sweeps her off her feet, while causing a massive up- roar in the process. Directed by Terrence Davies. Premieres Sunday, September 11, TIFF Bell Lightbox 1, 9:15 p.m.; Tuesday, September 13, Isabel Bader Theatre, 4:45 p.m.; and Saturday September 17, TIFF Bell Lightbox 1, 6:15 p.m.

Martha Marcy May Marlene features a breakthrough performance from Elizabeth Olsen, younger sister of the Full House fashion duo, as a girl who escapes from a hypnotizing, manipulative cult and seeks refuge on an isolated farm with her sister’s family. She attempts to readjust her life following her past traumas, but things take an unhealthy turn when her new life causes her to suspect that the cult and its leader (John Hawkes, Winter’s Bone) are still after her. Directed by Sean Durkin and also starring Hugh Dancy (Our Idiot Brother). Premieres Sunday, September 11, Ryerson, 3 p.m; Monday, September 12, Scotiabank Theatre 3, 10:15 p.m.; and Saturday, September 17, TIFF Bell Lightbox 2, 9:45 p.m.

Beauty follows the pathologies of a successful, middle-aged businessman named Francois (Deon Lotz) who develops a crazed obsession over his daughter’s new love interest, Christian (Charlie Keegan). From the mere sight of this gorgeous young man, Francois becomes deeply enamoured with Christian and struggles to repress the feelings that are consuming him. Set in the Cape Lands of South Africa, Beauty takes the audience on a psychological whirlwind of envy and clandestine desire, while demonstrating just how dangerous such a temptation may prove to be. Directed by Oliver Hermanus. Premieres Friday, September 9, AMC 2, 5:30 p.m.; Saturday, September 10, Isabel Bader Theatre, 9:30 a.m.; and Friday, September 16, TIFF Bell Lightbox 1, 9 p.m.

Directed by Canadian girl Sarah Polley, Take This Waltz focuses on the sweet and wholesome marriage of Margot (Michelle Williams, Blue Valentine) and Lou (Seth Rogen, Knocked Up). Yet when Daniel (Luke Kirby, Mambo Italiano) moves in across the street, he immediately catches Margot’s eye and their chemistry becomes difficult to ignore. Torn between her devotion to her husband and her lust for this exciting, new man, Margo is faced with one of the most difficult decisions she has ever had to make. Also stars Sarah Silverman. Premieres Saturday, September 10, Roy Thomson Hall, 9:30 p.m., and Sunday, September 11, Ryerson, 12 p.m

Frederic Jardin’s Sleepless Night is a crime thriller in which Vincent, an undercover cop, lifts a bag of cocaine from under the nose of a drug-dealing club owner named Jose. When Jose finds out that the police deceived him, he kidnaps Vincent’s son and sends the cop on a frantic chase through the crowded and dangerous streets and clubs he busts on a daily basis. Stars Tomer Sisley and Joey Starr. Premieres Tuesday, September 13, Ryerson, 11:59 p.m.; Wednesday, September 14, AMC 1, 3 p.m.; and Friday, September 16, Scotia- bank Theatre 11, 9:45 p.m.

Albert Nobbs tells the story of a woman (Glenn Close, Damages) forced to live her life as a male butler in order to maintain her autonomy in the otherwise destitute setting of 19th-century Dublin. In the guise of a man, she is able to sustain herself in the prim and proper world of Ireland’s privileged classes by working in a swanky hotel. She manages to conceal her true identity for 20 years, but when a dashing young man arrives on the scene, her instincts cause her resolve to weaken and she contemplates shedding her façade once and for all. Does this British period piece have what it takes to be the next The King’s Speech? Directed by Rodrigo Garcia and also starring Jonathan Rhys Meyers (The Tudors). Premieres Sunday, September 11, Roy Thomson Hall, 9:30 p.m.; Monday, September 12, Winter Garden Theatre, 12:30 p.m.; and Saturday September 17, Ryerson, 9 p.m.

50/50 is a film that treads a fine line between inspirational and crass. It addresses the difficult topic of cancer and what it’s like for a person to know they either have a 50% chance of living or dying, while still maintaining a feel-good vibe through the bromantic chemistry of Joseph Gordon-Levitt and Seth Rogen. In an interview with BUZZ Magazine, Rogen said of the premise: “There’s a big margin for error on a movie like this. A bad cancer comedy’s like the worst f***in’ thing on Earth.” Directed by Jonathan Levine and also starring Anna Kendrick (Up in the Air), Bryce Dallas Howard (The Help), and Anjelica Huston (The Addams Family). Premieres Monday, September 12, Ryerson, 6 p.m., and Tuesday, September 13, AMC 7, 2 p.m.

Gala: Red-carpet events with the director and actors/actresses in attendance at the premiere.

Special Presentation: Films from the world’s most renowned directors, sometimes featuring a Q&A session with the director and cast.

Midnight Madness: Films outside the mainstream that often instill some nail-biting moments.