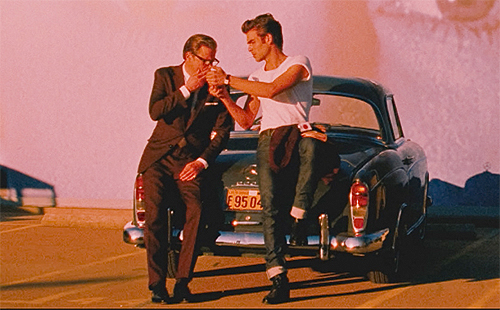 Colin Firth has made a career out of playing soft-spoken, charming British men in films like the Bridget Jones series. But in Tom Ford’s directorial debut, A Single Man, Firth got the chance to show off more of his acting chops, garnering his first Academy Award nomination in the process.

A Single Man takes place over the course of one pivotal day in the life of an English professor, George (Firth), eight months after the death of his long-term partner (played by Matthew Goode, who appears only in flashbacks). As George contemplates suicide, he also has to deal with his clingy best friend, Charley (Julianne Moore) while trying to ward off advances from one of his intrigued young students, Kenny (About a Boy’s Nicholas Hoult).
A Single Man has many things going in its favour. Ford, who served as the creative director at Gucci for ten years, proves to be a natural behind the camera. The breathtaking visuals combine with the interesting dialogue compensate for the somewhat shallow plot. Every scene is filmed with gorgeous precision and his use of colour is impressive. For example, as George experiences human connections throughout the course of his day, the colours in the film become slightly brighter, then fade away as the connections end. The effect could have easily come across as gimmicky, but it’s done subtly and serves a clear purpose in the story.
The film does occasionally wander into slightly self-indulgent territory with its calculated camera work, but for the most part, Ford prevents the film’s stylistic flourishes from overshadowing the fascinating story of the characters on screen.
Firth, often the only person onscreen, gives a quietly moving performance as a grieving man. There’s none of the histrionics that you might expect in a film about the loss of a loved one and George’s put-together facade rarely cracks. But Firth doesn’t need the big, emotional scenes to make an impact. He makes George’s internal struggle perfectly clear.
Having given one of the most celebrated performances of 2009 in A Single Man, Firth earned a string of Best Actor nominations at various awards shows this winter. But Firth and the rest of the competition have largely had to settle for the honour of being nominated, since Jeff Bridges has collected most of the awards for his performance as an aging blues musician in Crazy Heart. (Up in the Air’s George Clooney, Invictus’ Morgan Freeman and The Hurt Locker’s Jeremy Renner make up the rest of this very strong category.)
After losing at the Golden Globes and Screen Actors Guild Awards, Firth did manage to beat Bridges recently at the BAFTAs (often considered the British equivalent of the Oscars).
As satisfying as it may be to watch Firth get recognition for his work, the British Academy does tend to honour fellow Brits (the Best Actress BAFTA this year also went to British Carey Mulligan for her role in An Education). Add Bridges’ status as a veteran actor, as well as the fact that this is his fifth Oscar nomination (with no previous wins), and it becomes even more unlikely that Firth will receive the Oscar this year.
Firth represents A Single Man’s sole Oscar nomination. With the Best Picture category now offering ten nomination spots, it’s unfortunate that A Single Man didn’t get recognized.  A Single Man could have been a worthy nominee in the Original Score, Art Direction and Editing categories, but was overlooked in favour of Oscar favourites such as Avatar and The Hurt Locker. Is the Academy favouring commercially successful film that audiences are already familiar with?
A Single Man is notable for its refreshing direction, acting and story. If his debut film is any indication, we could certainly see great things from Tom Ford in the future. It may not go home with any awards from this year’s Oscars, but A Single Man is worth checking out.