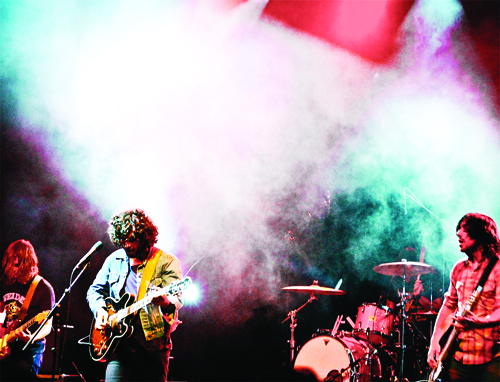 Ask any first-year what they look forward to most during Frosh Week and they’ll tell you, but of course, the concert. The speculations and lengthy discussions started weeks before any concrete decisions were made: “Which bands are playing at U of T this year?” “I heard there’s going to be five different bands!” “Can I sneak in if I don’t have a T-Card?” With all the hype surrounding the Frosh tradition, it was safe to assume that mass hysteria would erupt from the walls of Varsity Stadium on Bloor Street as U of T students filed in to see Anjulie, Arkells, and headliner, Talib Kweli. Yet moments away from its inception, the atmosphere at the concert seemed anything but lively, despite the centre-floor DJ trying to rev everyone up.

Playing to a more than half-empty arena and a handful of onlookers near the stage, Anjulie kicked off the show. The Oakville-born pop singer is best known for her hit single “Boom,” which reached number one on the US Billboard Dance Chart. Anjulie has played various gigs including VFest this past summer. Although she was supported by an energetic band and elegant backup singers, she didn’t communicate with the crowd as well as she could have, which gave the impression that she is still a timid performer despite her increasing exposure to the music scene. Nevertheless, Anjulie showed her vocal range with songs like “Rain” and “The Heat” and managed to get the crowd going with her powerful choruses.

Anjulie revealed that she had never attended university herself and, like many students in attendance, was experiencing a university inauguration for the first time. As her set came to a close, she brought out her digital camera and filmed the revitalized crowd for her video blog, a clever ending that unified the students and the up-and-coming entertainer.

Following the performance, two UTSU representatives got the attention of students when they started throwing free iTunes download cards into the audience, and by the time the Arkells hit the stage, the crowd had grown to an impressive size with everyone in good spirits. The Arkells began with their rendition of “Amazing Grace,” sparking murmurs from students unfamiliar with their music, but silenced everyone when they kicked up the melody and transitioned straight into “Deadlines,” the power-punching lead track off of their full-length debut album, Jackson Square.

Their infectious style and stage presence was evident in every song they performed, and the band put everything they had into the performance, playing extremely well off each other and in complete unison with their emphatic movements.

Current radio single “Ballad of Hugo Chavez” stood out as one of the Arkells’ most well written songs, and they followed it with a mellow track entitled “Country Boy,” which showcased how diverse their sound can be. The most amazing performance by far was “No Champagne Socialist,” in which keyboardist Dan Griffin broke out the harmonica for a bone-chilling intro that set the mood and inspired the audience to new heights. The album’s strongest tracks, “John Lennon,” “Blueprint,” and “Oh, The Boss is Coming!” rounded out their set and were greatly received by the audience due to the simple fact that the band engaged with the crowd, repeatedly chanting the words to choruses and encouraging the audience to sing along. After the Arkells’ performance, I got the chance to speak to front man Max Kerman about what’s ahead for the Hamilton group. “We’re very busy at the moment and we’ve been working on some new songs that we hope to play on our upcoming full tour in November,” says Kerman.

When prompted on the topic of their rising fame and how they’re adjusting to the spotlight, Kerman laughs. “Were really lucky to have played with some big bands like The Tragically Hip, but in the end we always remember how hard we’ve had to work to get it.”

The final act of the night was Brooklyn-born rapper Talib Kweli. He is best known for his once-popular hip-hop group Black Star with fellow MC Mos Def, as well as for his work with Kanye West, who produced Kweli’s 2002 album Quality.

Kweli jumped from song to song, each one backed with the crowd’s support and enthusiasm and ended the night on a high note that could not be more true to the nature of this year’s theme, Ampl!fy: Live Out Loud.