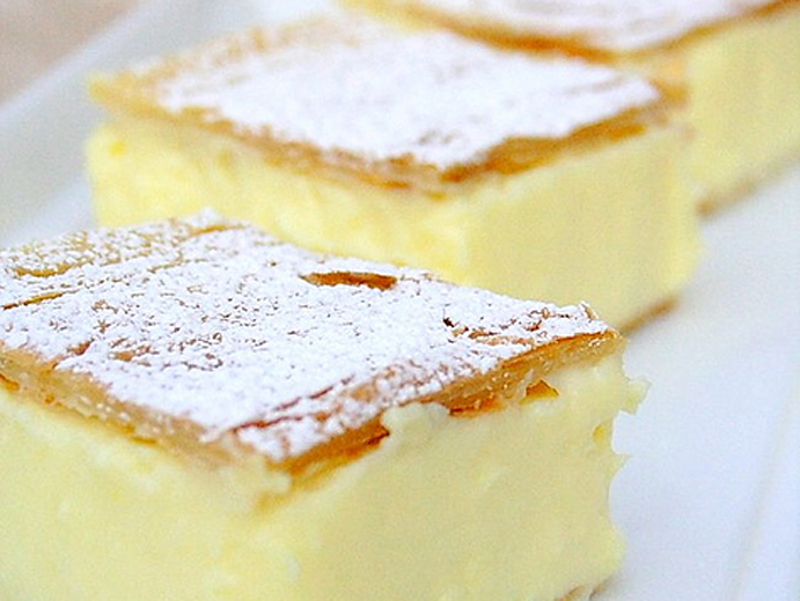 This week’s offbeat food find comes from Lucy Zemljic, a fourth-year English student and rabid fan of desserts and her grandmother’s cooking.

It seems like we’re on a roll here with sweets and desserts for our Offbeat Food Finds, because after Amir’s sugary pineapple buns (and I mean the food), this week’s find is another tasty dessert, straight from my grandmother’s old-country dessert cookbook. Let me introduce a delicious Croatian treat, kremšnite (that’s pronounced krehm-shnee-teh).

This elegant light dessert consists of a thick layer of creamy sweet custard, and a layer of fluffy whipped cream, sandwiched between several thin layers of flaky phyllo dough. This tasty treat is very popular throughout Croatia; different versions abound in various parts of the country.

But it might turn out to be an interesting food experience for those who are used to heavy cakes and pies, as it’s quite different from both, and is surprisingly light on both the sugar and the stomach. So if you’re craving something to appease that sweet tooth, but don’t want to be keeling over from a sugar-induced stomach-ache afterwards, head over to your local Balkan food market or Croatian restaurant and order a square or two of kremšnite. Or better yet, ask your Croatian friends to invite you over next time their baba cooks up a storm. Don’t forget to have a strong cup of Croatian-style Turkish coffee with those desserts, just to balance things out. And while you’re at it, why not throw caution to the wind and venture into the delicious world of Slavic food? (Because it’s not all about sausages and cabbage rolls, you know.)