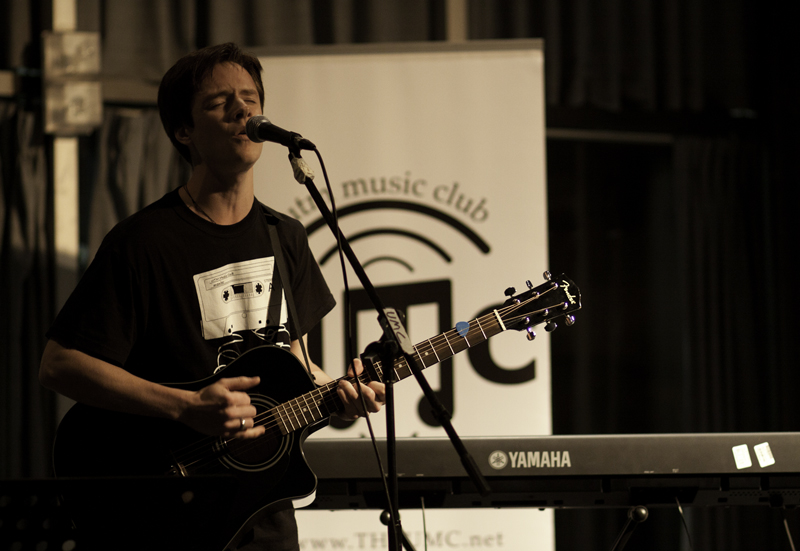 Last Friday, the UTM Music Club held their first Open Mic Night of the semester. The event, held at UTM’s Blind Duck Pub, showcased a variety of student musicians and provided a space for students to hear some local talent. The club’s president, Nilabjo Banerjee, talked to The Medium afterwards about the event, UMC’s plans for the year ahead, and his love of Switchfoot.

The Medium: How does UTM Music Club prepare for an Open Mic Night event? What are some of the things you try to keep in mind?

Nilabjo Banerjee: UMC prepares for an Open Mic Night like most of our events: we set our dates

early in the semester and plan out the roles of each executive in the club. Usually, two to three weeks before the show we notify our members of the event and that they can sign up to participate through an online link we provide. Once we get our performers, we create the event setlist, then ask the performers to let us know what they need for their own set. On the day of the show, we usually head to Long & McQuade for any additional equipment that we may need. While we do prep extensively, I feel the most important part of the show is the soundcheck beforehand, in which we have the performers come in an hour early to test their equipment and mic levels; it’s the only way to make sure everything runs smoothly, and it’s the only way to make sure the fun isn’t ruined by technical difficulties.

TM: How do you feel the night went? Were there any highlight performances that you felt the crowd responded well to?

NB: Overall, the night went extremely well. We have a superb sound team that not only made sure everything ran smoothly but that the event ended on time. It’s really hard to give credit to one act. All the performers did well, and the crowd loved them. I mean, just as an example, Sterling Carter and her friend Jeffrey rapped their own lyrics to a remix track of Kid Cudi’s “Day ’n’ Night”. It was one of those creative moments that I really love to see when we have events like this. Another act that definitely caught the attention of the crowd was Nash Marques’ performance. Nash covered a few songs that I heard one girl say “made her hearts melt.” We also got to see some groovy guitar playing from Uriel Romero, and some classic covers of Jimi Hendrix by Julien Falcone. Those are the types of performances that create a great atmosphere and mood. Yang played Nocturne on piano, and we also had some great original stuff performed by two of UMC’s executives Andrew and Michael – as well as a great vocal and guitar performance from James Murray. Nothing was off limits and there was so much variety. I loved them all!

TM: What other events does UTM Music Club plan to hold throughout the year, and how can students get involved?

NB: UMC has a plethora of upcoming events that students and members can get involved in. We have Open Mics – similar to this event – on the second Friday of every month. The performances are limited to UMC members, but anyone can be in attendance and support their friends. We also have an Annual Charity Dinner, where we raise money for United Way. This year, our theme is holidays. Our plan is to encourage music centred not just on Christmas, but holidays around the world. Our goal is to showcase diversity of talent among our club members. We will be holding auditions for them shortly. Also, every Friday, we host jam sessions in room 250 of the Student Centre from 1 to 5 (p.m.). This is where members can drop by and just rock out! We also have ongoing guitar and vocal workshops, open to members, that provide lessons in singing and playing guitar. Right now, because of overwhelming response, the workshops are limited to members this semester; however, we will have more spots next semester. So, if someone is interested, non-members can still sign up for membership and register for a spot next year.

TM: Can anyone be a part of the UTM Music Club? What does the club look for in new members?

NB: Anyone can be a member. We do get tons of emails wondering if the club is only open to those who are musically gifted, and no, it is not. The club is an opportunity for talent of every kind and level to not only improve their skills but showcase their talent at different events. Being the only music-related club on campus, the goal is to support UTM talent and provide the student body a platform to support their music aspirations.

TM: What’s getting a lot of play in your iTunes or iPod right now? Who would be your dream artist(s) to collaborate with?

NB: Oh, that is a great question. When it comes to iPod play, I hate to be cliché, but I listen to a very diverse list of muscians. Right now, I have the new Switchfoot album on repeat, but I’ve been shuffling in some Skrillex and Porter Robinson. I also like to mellow out to this great folk band called Civil Wars.

If I were to collaborate with someone for a song, my dream would be Jon Foreman from Switchfoot. In addition to being gifted with a great voice, his lyrics have a sense of honesty and vulnerability. He is one of my favourite songwriters… like, ever! It would be a dream come true to be in the same room as him. Can you make that happen? Please… pretty please?

Nilabjo is the president of the UTM Music Club. To find out more about UMC on Facebook (facebook.com/umcmusic), on Twitter (twitter.com/umcmusic) or by email (music@utmsu.ca).