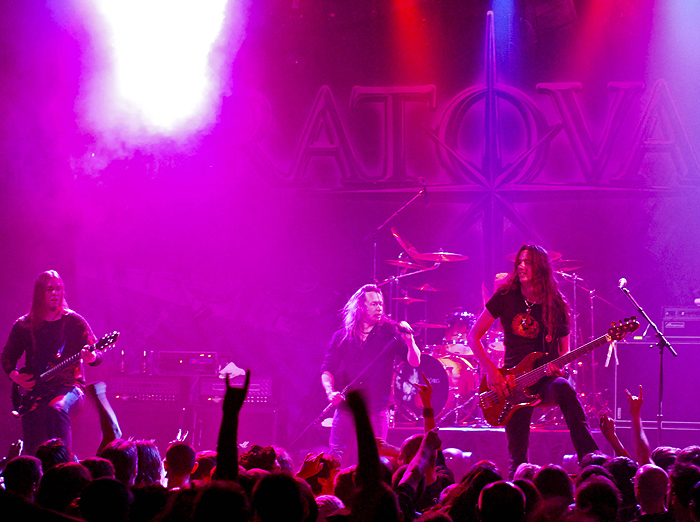 Stratovarius is a group some may consider a household name within the metal industry, but to the rest, theyre just another European power metal band. Stratovarius made their debut in 1989 and have since reinvented the progressive and power metal genres. Today, they focus more on melodies and tempos rather than the more technical style of metal music they first began playing.
Hailing from Finland, Stratovarius have made an enormous impact on the metal industry as a whole, being one of the oldest progressive metal bands alongside Dream Theater and Queensryche. After their self-titled album was released in 2005, they found themselves in financial crisis. Their label had suddenly run out of funding and their lead guitarist and principal songwriter left the group. Since then Stratovarius has been fighting court battles in order to gain funding and to retain rights to their catalog.
Four years later, Stratovarius reinvented themselves with their current album Polaris. The band released the album thinking the fans may have been turned off by their 2005 release, which was more mainstream than what they were used to hearing.
Stratovarius was overwhelmed when Polaris was well-received by both fans and critics. The album was both produced and financed by the band themselves.
Though their previous (bankrupt) label released statements detailing the strife between bandmates, the band, according to Stratovarius keyboardist and pianist Jens Johansson, was very happy and productive — their morale and aspirations were stronger than ever.
Looking at their new album, Strotovarius is best described as a melodic power metal band who put emphasis on melody with a symphonic context. Johansson describes their sound simply as heavy music with a melody, which has been their motto since their start in 1984. But their sound has veered at times in other directions ranging from progressive, melodic and power metal.
While the band believes they havent remained current with the progressive metal industry, they feel they have kept their sound organic and consistent with when they started. They didnt want to turn too far away from their original design. For example, Johansson uses a DX-7, a very inexpensive keyboard. Stratovarius tends to use the same equipment from the 90s and the members dont feel the need to keep up to date with new technology.
At their concert last week at the Opera House, Stratovarius played older hits such as Eagleheart, Black Diamond, Hunting High and Low and A Million Lightyears Away, along with some of their newer material. They did not, however, play any songs from their 2005 release.
Heading into the venue, the crowd was clad with both old and new Stratovarius t-shirts. The three opening bands were received very well, but it was clear that the crowd was restless in anticipation for Stratovarius.
Soon enough, the lights were cut and Stratovarius took off. The entire night was filled with the quick-paced melodies and blasting bass beats — the bands trademark — which hurled towards the fans like an angry Viking storm.
Altogether, it was a night of symphony, warm melodies, extreme power and a memorable performance by Stratovarius.