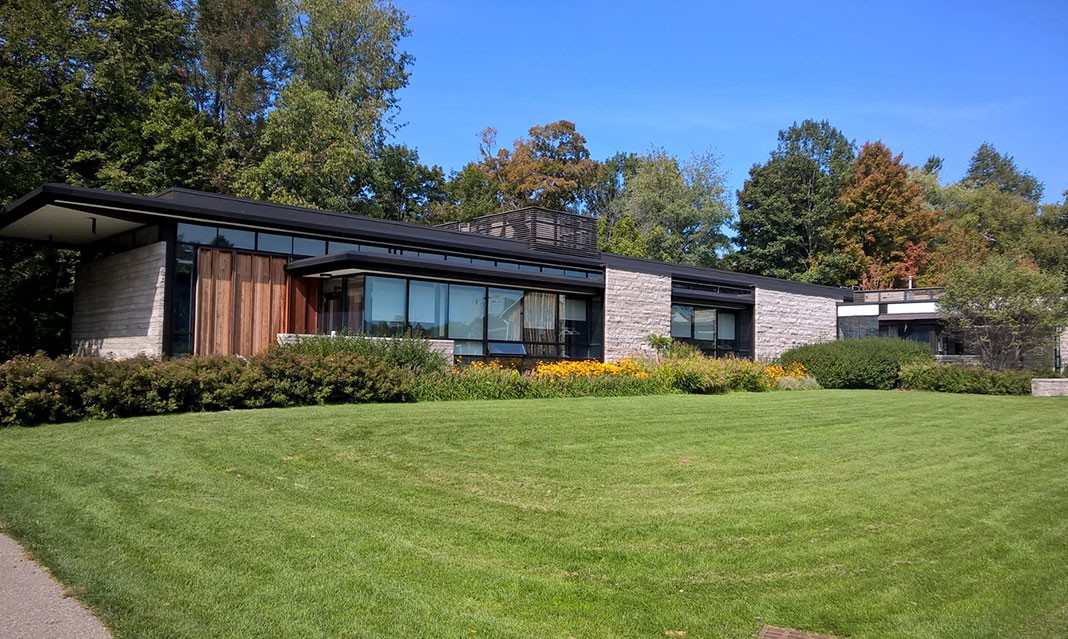 The Rumi Gallery, located in Port Credit, is one of Mississauga’s hidden gems.

The gallery sits in a residential area, in between an auto repair shop and a fitness studio. Built with ceiling-high glass windows and a simple yet classy entrance sign, the Rumi Gallery is hidden away but certainly worth the trip.

Founded in 1990, the gallery features antiques, fine art, and restored furniture from the 18th to 20th centuries. The Rumi family decided to renovate the space 17 years later and transform it into the gallery it is today. The Rumi Gallery exhibits works that focus on contemporary art and the post-war period. Some of the artists include Jean Albert McEwen, Louise Nevelson, and sculptors Sorel Etrog and Jean Arp.

Upon entry, I’m directed to the Matthew Varey tapestry exhibit, which has been on display since September 12, and features Varey’s wool and linen tapestries. A pamphlet explains that Varey’s works resemble maps and focus on “elements of war, woven into something soft”.

I had the chance to speak with the enthusiastic art director, Joseph Rumi, about his family-owned gallery. “What makes the Rumi Gallery so special is its authenticity. We take pride in the art here because we offer museum-quality pieces right in your neighbourhood.

“I encourage students to come and see art for themselves,” he continued. “Coming to Rumi Gallery is different from going to any other museum because you can actually interact with the art. It is one thing to experience art in a classroom while looking at a slideshow, but it’s another thing actually seeing it in the flesh. It is like night and day,” Rumi said while lifting Nevelson’s 3D art off the hooks on the wall. “Each piece has a story, and we are here to tell it.” In 2009, visual artist Zenon Andrusyszyn saw a documentary on the chalk caves near Vimy Ridge. Farmers in the area had mined them for building materials. In WWI, soldiers lived 33 feet underground in the quarry. After the war, farm waste covered the entrances to the cave and preserved the soldiers’ carvings until they were discovered in 2001.

The caves are on private property and inaccessible to the public due to safety reasons. Andrusyszyn wanted to preserve and share the carvings with the world. He founded CANADIGM, the Canadian Historical Documentation and Imaging Group, and enlisted his colleagues in the non-profit project.

The volunteers spent their two weeks’ work vacations in the caves, searching and cataloguing 200 names and carvings by flashlight.

Their next step was to scan each carving. The team used a $22,000 3D laser scanner controlled by a laptop computer. The tight quarters of the caves prompted the team to scan each carving multiple times and from different angles. They later overlapped the shots to reconstruct the carvings.

Of the 200 carvings catalogued, 40 have been printed so far. The back area of the presentation room hosts the collection.

One of the pieces the Canadigm team is proudest of is a print of a letter box carved into the wall by William Beckett and Thomas Mason of the 15th Battalion (48th Highlanders). A 3D print usually takes 22 hours. The mailbox took three days.

The soldiers carved “Toronto ONT. Canada” at the top and “France 1917” at the bottom. Andrusyszyn says the soldiers probably used it for their letters home.

When the exhibit closes on November 28, the collection will be divided among various museums. Visual Arts Mississauga, located in beautiful Riverwood, functions as an artistic instructional centre where children, teenagers, and adults can participate in a variety of art courses and workshops. Classes include oil, acrylic, and watercolour painting, as well as hand-building with clay, drawing techniques, photography, and more. VAM also sells paintings done by local artists, which are displayed on the walls between classrooms.

Founded in 1977, VAM aims to enrich the community with an appreciation for the arts. Their mission is to provide valuable artistic experiences in the form of classes and workshops to anyone interested in expanding their creative talents. The foundation strives to connect members of the community through a shared passion for art.

The day of Doors Open Mississauga, the MacEwan Terrace Garden was in full bloom and provided an enchanting backdrop to the visual arts building. For the event, VAM’s classes were running as scheduled with the addition of a free art tutorial for Doors Open visitors. Visitors were welcome to join the VAM staff in the designing of art trading cards—a card that serves as a sample of the artist’s work. The room filled quickly with excitable children, parents, and first-time painters. Visitors chose from a selection of paints, markers, and magazines to decorate their trading cards. The staff were eager to offer advice and friendly conversation during the event. When the cards were complete, visitors had the option of holding on to their art or exchanging it with someone else. Children enthusiastically shared their art and swapped cards back and forth.

Visual Arts Mississauga’s Doors Open event reinforced their mandate. The art trading card tutorial gathered members of the community in a mutual respect for art and educated outsiders on the culture of the organization.