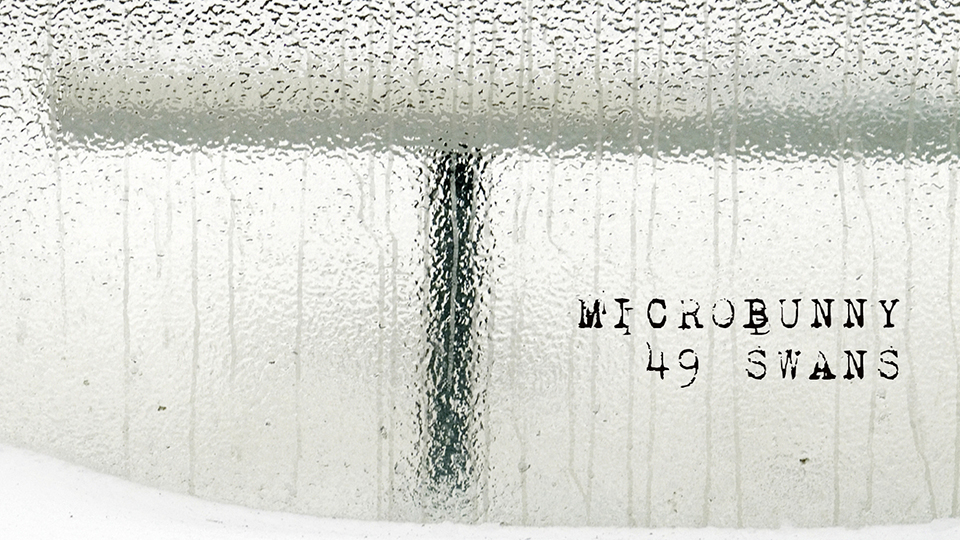 I go to the green cabinet in our office that holds a wealth of old CDs, mostly indie, that have been sent to us by music publicizers and labels. Here’s a greyish, rainy-looking one from 2010. “Microbunny,” it says. “49 Swans.” I’m not sure which one’s the artist and which one’s the band.

On the drive home I pop it in. I’m not sure what to expect. The songs have mysterious names like “The Greening”, “bellyful-o’-kibble”, and “Evergrowing Rust on a 1967 White Corvair”. A beat starts up on the first track, “Gravity & Air”. Synthesized sounds begin pulsing. A female voice, identified in the liner notes as Rebecca Campbell, chimes in with vocals allegedly unusual for the work of Al Okada. (Okada’s from Toronto and founded King Cobb Steelie, says his website.)

“It’s only water, it’s only gravity and air,” Rebecca sings. “It doesn’t matter.” The words and melodies are hers, the musical background is Al’s.

That song is one of three or four gems. Lemme break the album down for you like this: 60% meh, 20% gems, and 20% “I’m not even sure I’d call this a song.” The gems are when the collaboration ventures into the jazzy, like on the beautiful “Blue September Blues”, although the seven-minute electronica number “Embers” has a hook that goes “These jet engines in our ears…” which, I dunno, works for me. This isn’t the last time I’ll listen to the song.

Then there’s the two-minute drone of “Spring Ice Remnant Death Knell Fire Warning”. My theory is that, much like you just get brown when you mix too many colours together, all those nouns turned into this amorphous mess.

As with all entries in the “Rejected Rediscovered” column, the album can be picked up for free by the first interested person to come to the Medium office.