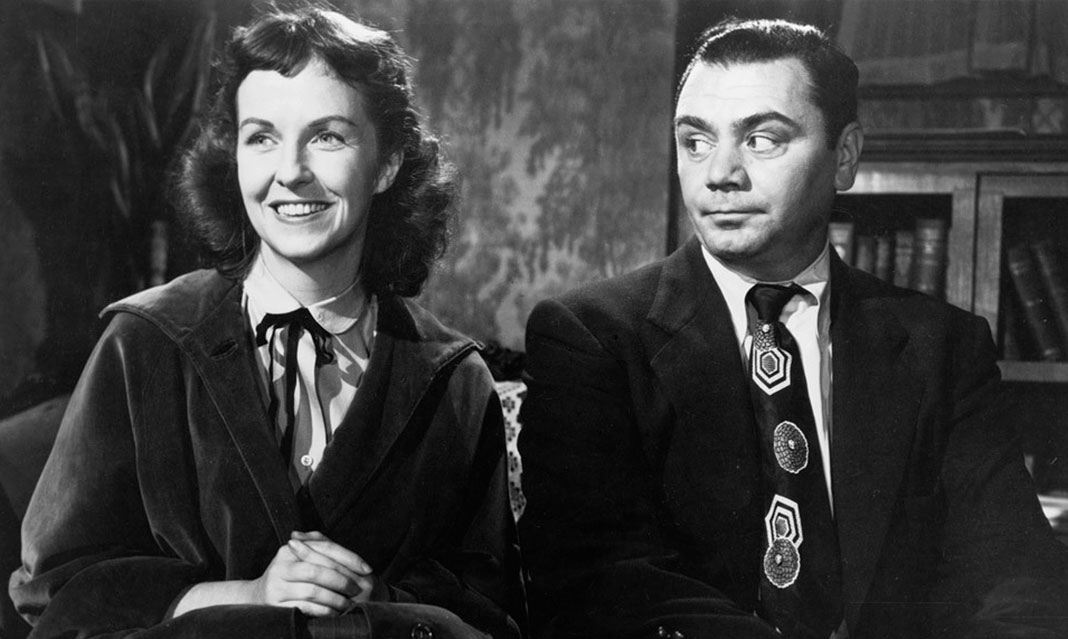 From the opening scene of Marty (1955) to the closing credits, you can’t help but sympathize with the titular character.  Directed by Delbert Mann and written by Paddy Chayefsky, the film follows Marty Piletti (Ernest Borgnine), a 34-year-old butcher from the Bronx.

The film begins with Marty at the butcher shop, serving customers while chatting about his younger brother’s recent wedding.  Still single, the customers badger Marty, saying he should be ashamed of himself, still living at home while all his younger siblings have married.

This constant berating does not stop at the butcher shop, as Marty’s widowed mother Teresa (Esther Minciotti) urges her son to go to the Stardust Ballroom to try and meet someone.  Marty, who has given up on finding love after being rejected constantly, reluctantly goes and like always, stands at the side of the dance floor alone.

As Marty awkwardly stands against a wall, he is approached by another man, who offers to pay him five dollars to take his blind date Clara (Betsy Blair) so he can meet up with an old girlfriend.  Marty outwardly rejects, scolding the man for treating his date that way. Clara sits by herself as she is abandoned by her date, running out to the balcony crying.  As Marty goes to comfort her, the two connect, walking around New York City confining with one another about their loneliness and ambitions.

It’s a sweet and simple story, watching Marty and Clara fall in love.  However, things get complicated when Teresa meets Clara and realizes that she will be all alone if Marty marries.  His mother and friends urge him to not continue the relationship, citing excuses about Clara’s appearance and non-Italian heritage.  Being pushed around all his life by family and friends, Marty must stand up for himself and finally think about his own happiness.

The narrative’s emotional core is reliant on Borgnine’s incredible performance. You feel every painful moment and celebrate every triumph Marty experiences. As Clara and Marty sit in a diner, he reveals the suicidal thoughts he had after returning home from World War II, and the pain in Borgnine’s eyes is agonising.

One of my favourite subplots is between Teresa and her sister Catherine (Augusta Ciolli). Catherine is a headstrong woman, who moves in with her sister after she overstays her welcome with her son and his wife.  The two sisters’ bickering is comical and can be familiar for viewers who grew up with older relatives of that era and culture.

The film can show its age at times, however, especially one instance when Marty attempts to kiss Clara that would be questionable if released today.

Marty won four Academy Awards, including Best Picture and Best Actor for Borgnine. Delbert Mann received Best Director and Paddy Chayefsky won for Best Adapted Screenplay.  Marty may not be the most well-known Best Picture winner today, but this hidden gem is definitely worth a watch.